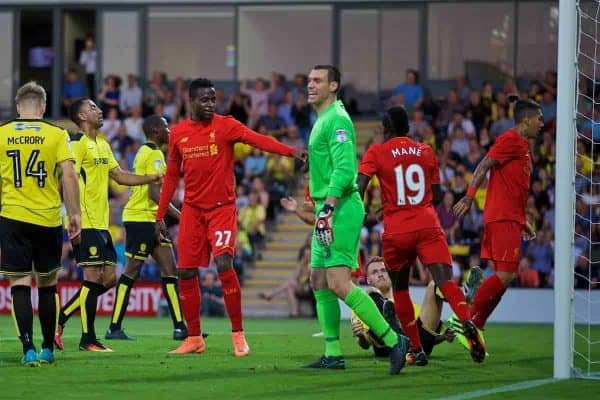 Karius to debut, Can and Origi to start for strong Reds – Predicting Liverpool’s XI vs. Derby County

Jurgen Klopp is set to name a strong Liverpool team for the Reds’ League Cup clash against Derby, but could use the quality of his squad to make changes to his starting XI.

After cementing an excellent start to the Premier League season, Klopp’s men head to Derbyshire to face a Championship side for the second successive round in League Cup competition.

Nigel Pearson’s Rams present Liverpool’s latest challenge at Pride Park, where the Reds aim to produce a similarly professional performance and positive result to that displayed at neighbours, Burton Albion, to ensure they reach round four.

Klopp is set to name a strong team for the first meeting with Derby in almost nine years, but could again make a select number of changes to hand valuable match action to fringe players and preserve certain first-choice figures.

With Klopp having stated his hunger for cup success, a similarly strong team to that displayed at Burton is set to be fielded.

However, change is likely to come with Karius entering for Simon Mignolet behind the usual defence, while Can could return to the base of midfield with Lallana making way for a well-deserved rest, leaving Jordan Henderson to partner Georginio Wijnaldum.

Coutinho is set to keep his place after returning at Stamford Bridge, while Sadio Mane can continue in his right-side role, but one further swap could see Origi take over from Sturridge in spearheading the attack.

Three changes would see Liverpool’s XI start like this:

The quality of his squad gives Klopp various ways to deploy the team, and one of those could see the German revisit the exciting 4-4-2 diamond utilised in the 6-1 thrashing of Southampton last season.

Within that, Karius would again start for his Reds bow, while with extra width and pace needed from full-backs, Moreno could return at left-back, giving Milner a night off.

A powerful and technically gifted midfield could be assembled with Can anchoring and Henderson and Lallana in box-to-box roles, allowing Coutinho to feature at the tip of the diamond behind the rarely seen but lethal strike partnership of Sturridge and Origi.

Four changes, as Klopp made at Burton, would see this XI take on the Championship side.

Klopp made no secret of his aim to win the competition in his press conference, and another professional and clinical performance will be required for the Reds to ensure they move one step closer to achieving it.