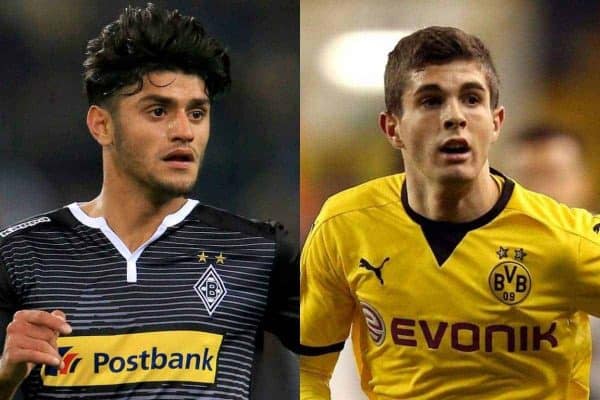 Liverpool manager Jurgen Klopp will not be deterred by failed summer bids for Bundesliga duo Mahmoud Dahoud and Christian Pulisic.

Klopp saw offers for the young pair fall short during the summer transfer window, but while the market has been closed for just one day, the 49-year-old is already plotting his future business.

Dahoud, a 20-year-old playmaker currently plying his trade with Borussia Monchengladbach, was subject of heavy interest from the Reds in June, but this eventually stalled.

Liverpool instead opted to sign Georginio Wijnaldum from Newcastle United, with the 25-year-old joining in a deal worth £25 million in July.

Meanwhile Klopp made a late, £11 million bid for Borussia Dortmund teenager Pulisic in the last days of the window, but saw this rejected outright by his former side.

But while Mario Balotelli, Luis Alberto, Lazar Markovic and Andre Wisdom left on August 31, Klopp will have already been focussing on Dahoud and Pulisic, according to the Liverpool Echo.

Liverpool are reportedly “planning to follow up their interest” in the duo, though this is unlikely to be in January.

Instead, with both players entering the final year of their contracts next summer, a double Bundesliga raid is likely ahead of the 2017/18 campaign.

This, however, is said to depend on Liverpool qualifying for European football for the next season, with Dahoud in particularly likely to seek a Champions League side, with various top-level outfits also vying for his signature.

Pulisic, a dynamic goalscoring attacker with world-class potential, would be an excellent signing for the Reds, and Klopp is clearly an admirer from his days as Dortmund manager.

But it is Dahoud who would be most welcome on Merseyside, given Liverpool’s need for tenacious, tough-tackling midfielders.

The Syrian-born star possesses an infectious work rate and an indefatigable engine, but also a great passing range and a superb long-range shot.

There is a reason why Klopp will hold a long-term interest in both Dahoud and Pulisic, and supporters will now hope the Reds can get these deals across the line next summer.