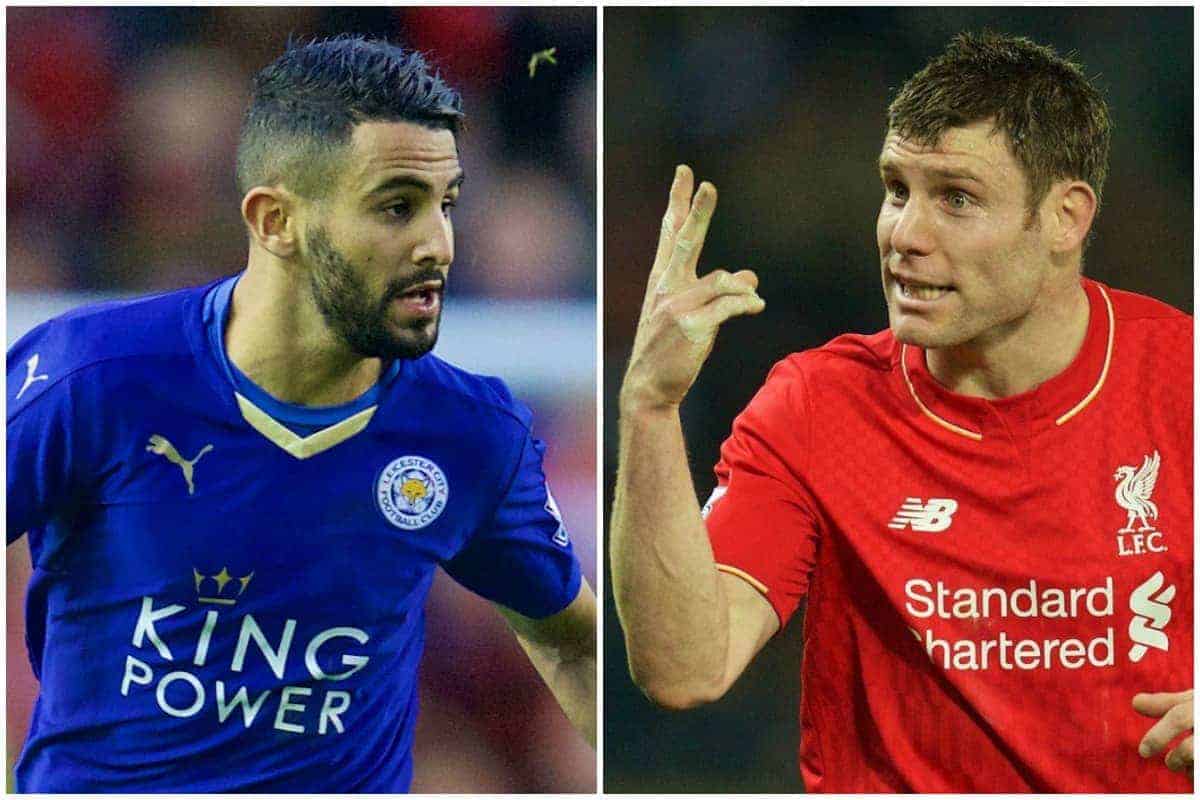 Ahead of Liverpool’s Premier League clash with Leicester City on Saturday, we pick out three match-ups that could decide the eventual result.

The champions visit a new and improved Anfield for Saturday evening’s league offering, in what promises to be a very interesting contest.

Both the Reds and the Foxes have picked up four points from their opening three league games, enduring a mixed start to the 2016/17 campaign.

It has the potential to be a game that is decided by very fine margins, as Liverpool’s attacking class looks to get the better of Leicester‘s brilliance on the counter.

Here are three key battles that could prove to be vital on the day. Much has been made of Jurgen Klopp turning James Milner from a versatile midfielder to Liverpool’s first-choice left-back.

The 30-year-old has done a solid enough job so far, impressing against Burnley and Tottenham, but there remain question marks about exactly what he can offer in the role.

Saturday will be comfortably Milner’s biggest test so far, as he comes up against reigning PFA Player of the Year Riyad Mahrez.

Leicester did very well to keep hold of the Algerian in the summer, and for all the influence of several other key players, he remains their star man by some distance.

On his day, he can look unplayable cutting in from the right-hand side, with his trickery, creativity and end product making him one of the Premier League‘s best attacking players.

The 25-year-old will believe he can run Milner ragged, and if he turns up to Anfield at the top of his game, it could be a worrying duel for Reds supporters to witness.

The fact that the Liverpool vice-captain is right-footed may work in his favour, however, with Mahrez likely to be cutting inside onto Milner’s stronger foot the majority of the time.

Milner could end up thriving as a left-back, but it is against opponents such as Mahrez when we will learn just how effective can be there.

Despite the availability of Daniel Sturridge and Divock Origi, it looks highly likely that Roberto Firmino will again lead the line against Leicester, as he did at Arsenal, Burnley and Spurs.

The Brazilian has shone so far this season, particularly in the 1-1 draw at Spurs, with his intelligence and class on and off the ball catching the eye.

While Firmino oozes elegance and effortlessness, the centre-back duo that he will come up against on Saturday, Wes Morgan and Robert Huth, couldn’t be further from that.

Both are no-nonsense, old-school defenders who know their limitations, and their outstanding consistency last season was a key reason for the Foxes’ unlikely title triumph. Firmino has to play to his strengths against them, pulling them out of position with his movement and pressing them relentlessly in order to exploit their lack of ball-playing ability.

The 24-year-old will be a potential nightmare opponent for the Leicester duo, who would be far happier up against the powerful, more one-dimensional Origi.

The likes of Philippe Coutinho, Adam Lallana and Sadio Mane will also be crucial when it comes to unsettling Morgan and Huth, but it will be Firmino who holds the key to giving them a day to forget.

He must not allow himself to be bullied, and therefore, negated.

There have been plenty of positives to take from Liverpool’s opening three Premier League games, but their defensive deficiencies have again reared their ugly head.

No side in the division has let in more goals so far, and the manner in which they have conceded them has been alarming.

Individuals errors, including sloppy passing, ponderous decision-making and lapses in concentration, have been far too apparent.

It looks as though Klopp’s first-choice centre-back partnership is now Joel Matip and Dejan Lovren, and they will be tested against Jamie Vardy on Saturday.

Lovren, in particular, has looked exposed against players of this ilk in the past, with Vardy’s match-winning display at home to the Reds in February one example of this.

Both he and Matip must be switched on in all aspects of their defending, with Vardy’s pace and relentless runs in behind something that can really hurt Liverpool.

He won’t be the only threat, though, with Ahmed Musa also possessing electrifying speed and new record signing Islam Slimani likely to make his debut from the substitutes’ bench.

Clean sheets have been hard to come by under Klopp, and if Matip and Lovren don’t find their top level on Saturday, the Liverpool goal may well be breached once more by Vardy and Co.