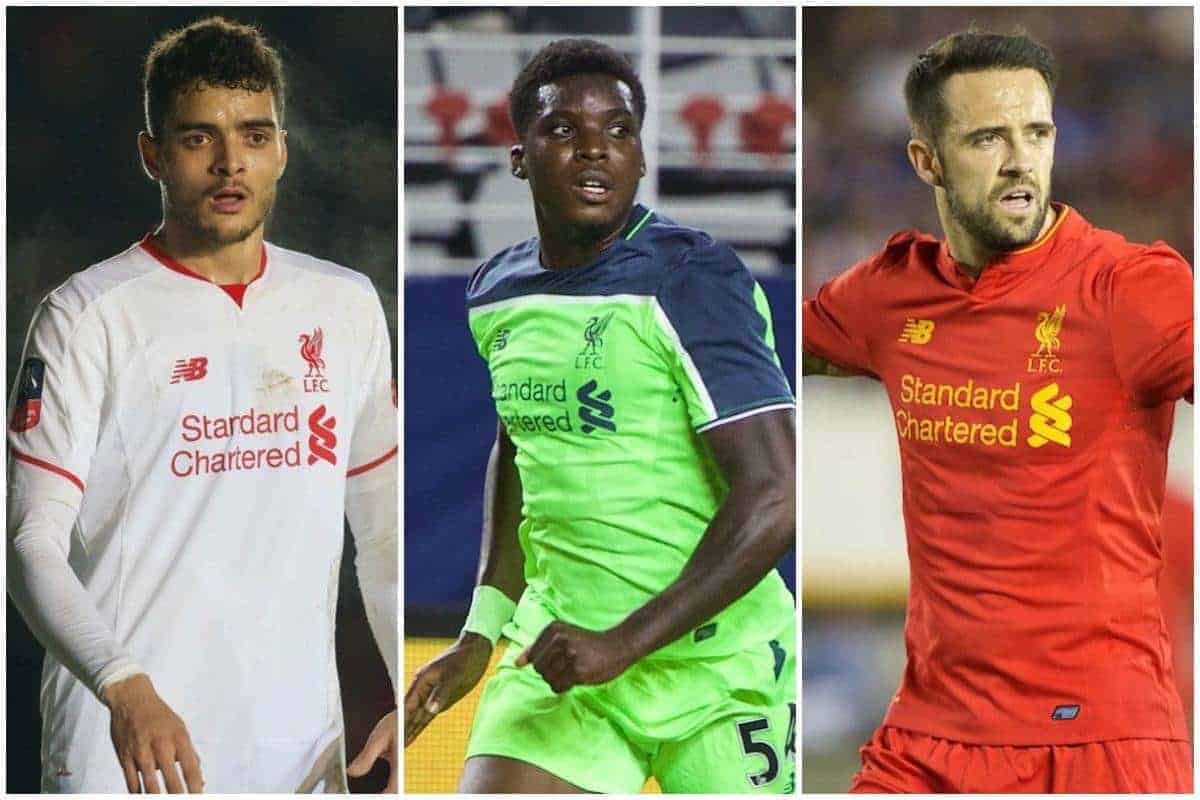 Liverpool tied up plenty of loose ends by the summer transfer deadline, but the futures of Tiago Ilori, Sheyi Ojo and Danny Ings are less certain.

Jurgen Klopp equalled a Liverpool record by shipping out 13 first-team players over the course of the summer, as he looked to streamline his squad.

Without European football in 2016/17, the Reds will play significantly fewer games, with Klopp therefore preferring to work with a much smaller squad.

Wednesday’s deadline day saw Liverpool loan out Lazar Markovic and Andre Wisdom, while both Mario Balotelli and Luis Alberto left on permanent deals, but some areas remain a job half-done.

So what can we expect from this Liverpool trio, and how should Klopp approach their availability?

Along with Markovic, Wisdom, Balotelli, Alberto and Mamadou Sakho, Ilori was part of a six-strong group made available to clubs in the final weeks of the transfer window.

But while Sakho refused a loan, and the remaining quartet sealed transfers away from Merseyside, a move simply didn’t materialise for the Portuguese.

According to reports, Liverpool were unwilling to send Ilori out on a fourth loan spell, instead looking to secure a permanent departure, valuing the centre-back at around £4 million.

With Olympiakos, Granada, Valencia, Eintracht Frankfurt and Freiburg all preferring a temporary signing, however, Ilori is now set to drop down to Michael Beale’s U23s squad for 2016/17, though whether he should is up for debate.

Ilori has struggled with injury problems since his £7 million move to Liverpool from Sporting CP in 2013, but when called upon on loan or in sporadic appearances for the Reds, he has proved himself an accomplished centre-back—and, as history suggests, one with qualities Klopp covets.

The 23-year-old is tall, strong, quick and comfortable with the ball at his feet, and with Klopp freezing Sakho out of his squad until the January window at the very least, could prove useful.

Instead of exclusively turning out for the U23s in Premier League 2, Ilori should be considered for a first-team role, providing cover for Joel Matip, Dejan Lovren and Ragnar Klavan, and support for Joe Gomez, who is still recovering from a troubling heel injury.

While he is at the club, Klopp may as well make use of Ilori, who remains a high-potential talent.

“We have to see. He’s a wonderful player for sure and his future is 100 percent at Liverpool,” Klopp told reporters in July, when asked about the possibility of loaning out Ojo.

“I don’t think we have to make a decision so early, we have time and we have to use the time.”

Klopp reneged on making a call on Ojo’s position in his squad until the final month of the transfer window, and circumstance likely played a part in his decision.

Ojo suffered a back injury during the Reds’ pre-season tour of the United States, and has spent the past month on the sidelines, recently telling supporters he would “come back stronger.”

During the winger’s time on the sidelines, Liverpool have sent Markovic to Lisbon, saw an £11 million bid for Borussia Dortmund forward Christian Pulisic fall flat and experienced a system failure without Sadio Mane on the flanks in August’s 2-0 defeat to Burnley.

Ojo can hope to benefit from Markovic’s departure and Pulisic’s unavailability and establish himself as Mane’s deputy on his return from injury, building on the bright start he made under Klopp at the end of 2015/16.

The 19-year-old’s skill, pace, bullish physicality and pinpoint delivery from out wide make him an excellent stand-in for Mane when unfit or rested, particularly when compared to an out-of-position Daniel Sturridge.

While Ilori should be considered for a first-team role and Ojo can expect regular game time on the wing in 2016/17, Ings’ position after deadline day is still unclear.

Liverpool reportedly resisted a number of loan offers for the 23-year-old striker in the closing stages of the summer window, with Sunderland among the clubs looking to sign Ings on a temporary deal.

Klopp is said to have earmarked a prominent role for Ings in both the short and long term, but it is hard to pinpoint quite where the former Burnley star fits in.

Sturridge, Roberto Firmino and Divock Origi are all ahead of him in the centre-forward stakes, while Mane, Ojo and Philippe Coutinho are among those vying for a starting role out wide.

Ings is able to play all across the forward line, ensuring his chances of game time are increased, but with so much competition, starts are likely to be few and far between.

Klopp has started just five players in the three attacking positions in his 4-3-3 so far in Liverpool’s first four games of 2016/17—Coutinho, Firmino, Mane, Sturridge and Origi—and all are of a higher profile than Ings.

The odd one out after deadline day, Ings would likely have benefited from a loan move, particularly given his lengthy recovery from a nightmare ACL injury, but now he is left to feed off scraps.