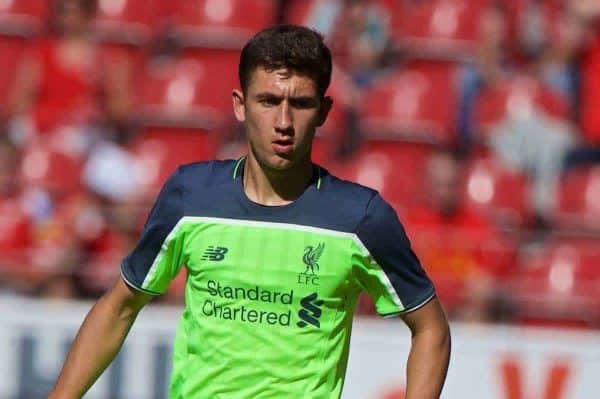 Liverpool Under-23s duo Cameron Brannagan and Toni Gomes were among the scorers as the young Reds defeated Kilmarnock Under-23s 6-1 on Friday.

Michael Beale led his side out the Marine Travel Arena, home of Northern Premier League side Marine FC, on Friday afternoon, in a friendly clash designed to maintain rhythm.

Meanwhile, cultured Portuguese midfielder Paulo Alves made his first appearance for the U23s this season after a frustrating injury, with the 18-year-old playing just over an hour against a makeshift Kilmarnock side.

After he was fouled in the penalty area early on, Brannagan opened the scoring from the spot, powering a low effort into the bottom corner.

Lennon then made it 2-0 after Adam Phillips, captain for the afternoon, sent in a teasing cross that was headed into the former Real Salt Lake youngster’s path.

Kilmarnock reduced the deficit after half-time, with Polish goalkeeper Kamil Grabara struggling to keep out a weak header, which eventually trickled in off the far post.

But Brannagan was on hand to restore Liverpool’s two-goal lead, finishing off an excellent move from Lennon and Phillips to make it 3-1, before assisting Toni Gomes’ first of the afternoon with an inch-perfect corner.

Harry Wilson, who came off the substitutes’ bench along with Gomes, Jordan Williams and Brad Garton, was the next on the scoresheet, firing home following work from Juanma, Phillips and Gomes.

The Welshman then returned the favour, turning intelligently near the halfway line before driving towards the box and laying the ball into the path of a grateful Gomes, who converted with aplomb.

Ahead of a busy period that will see them play Manchester United (October 18), Everton (October 23) and Manchester City (October 28) in the space of 10 days, this provided Beale’s side with a useful warmup.

With plenty of positives to take away from Crosby, the U23s can hope to continue to build momentum.