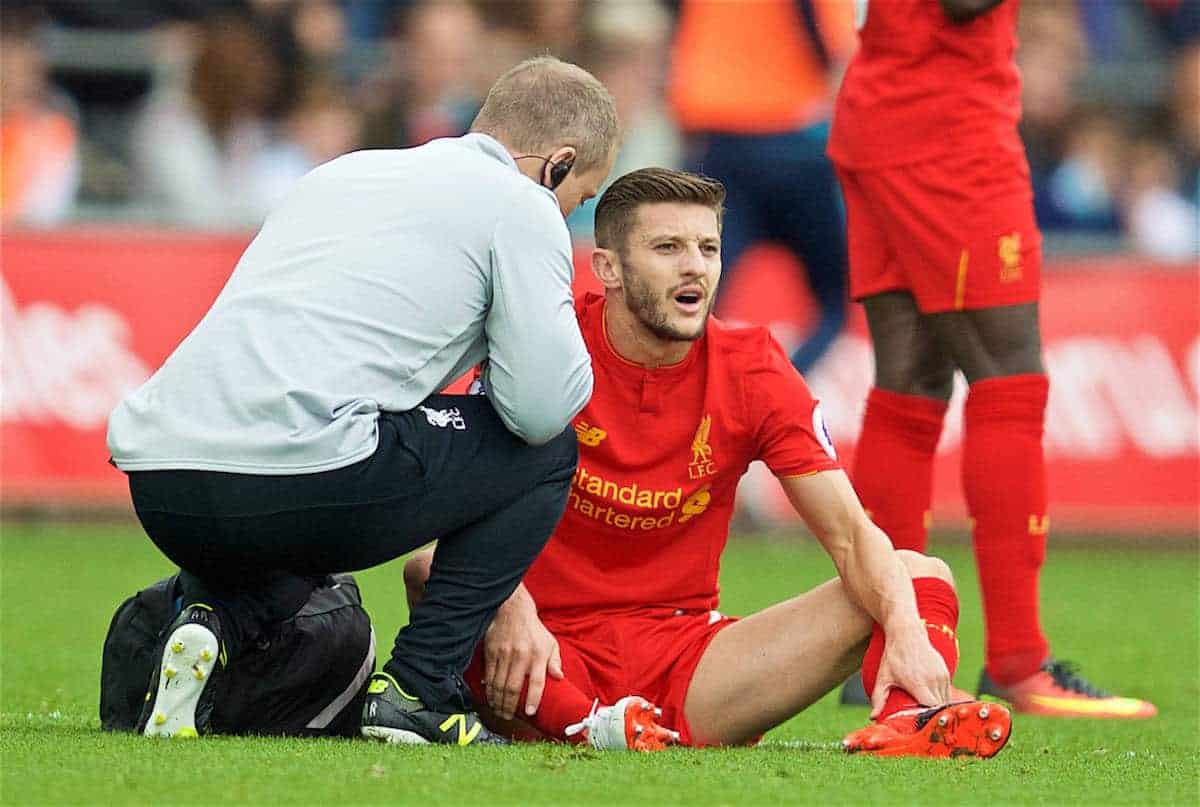 Adam Lallana and Dejan Lovren both picked up groin injuries in Liverpool’s victory against Swansea City but Jurgen Klopp hopes they’ll both recover in time to face Manchester United in just over a fortnight.

Liverpool’s win over Swansea at the Liberty stadium came at a cost as Lallana was forced to leave the field after just 20 minutes.

Lovren played out the full 90 minutes but Klopp revealed after the game that the centre-back also had an issue with his groin, and both players could be out of action for their nations in the international break.

Lallana wanted to continue after feeling the injury when tackled, but after a few seconds it was clear the midfielder couldn’t continue and he was replaced by Daniel Sturridge with less than a third of the game played.

Liverpool were trailing 1-0 thanks to a goal from Swansea’s Leroy Fer and it was a big blow for the visitors who lost one of their most impressive performers so far.

Thankfully, Lallana’s absence didn’t affect the result and Liverpool were able to bounce back after a disappointing first-half performance to seal a 2-1 victory.

With the international break approaching, it’s not too concerning for Liverpool and they hope to welcome both Lovren and Lallana back for the home clash against United on October 17.

Speaking in his post-match press conference, Klopp said “[it’s a] groin problem for both. Dejan got a problem in one of the last moments of the game. Adam felt it, tried again, didn’t work.

“So in this moment, I think they have no chance for national teams.

“But hopefully 16 days should be enough to bring them back on the pitch for the next game.

“There was no sign of it in the week.”

Speaking to BBC Sport, Klopp said of Lallana: “He has no chance for the national team.

“But hopefully 15 or 16 days should be enough to bring him back on the pitch.” Lovren missed the clash against Hull City last weekend due to illness but according to the manager, he’s unlikely to miss the next Premier League fixture.

The centre-back will probably be unavailable for Croatia though as they take on Kosovo and Finland. Lovren was omitted from the 2016 European Championship squad after a bust-up with manager, Ante Cacic.

He made a return against Turkey in September in their World Cup qualifier but is now doubtful to join them next week.

Lallana was expected to feature heavily for Gareth Southgate’s England side as they take on Malta and Slovenia, but his main priority now will be to recover in time for Liverpool’s clash against United.

In seven games, the midfielder has scored three goals and grabbed three assists for the Reds so Klopp will be hoping he recovers in time to welcome their rivals to Anfield.