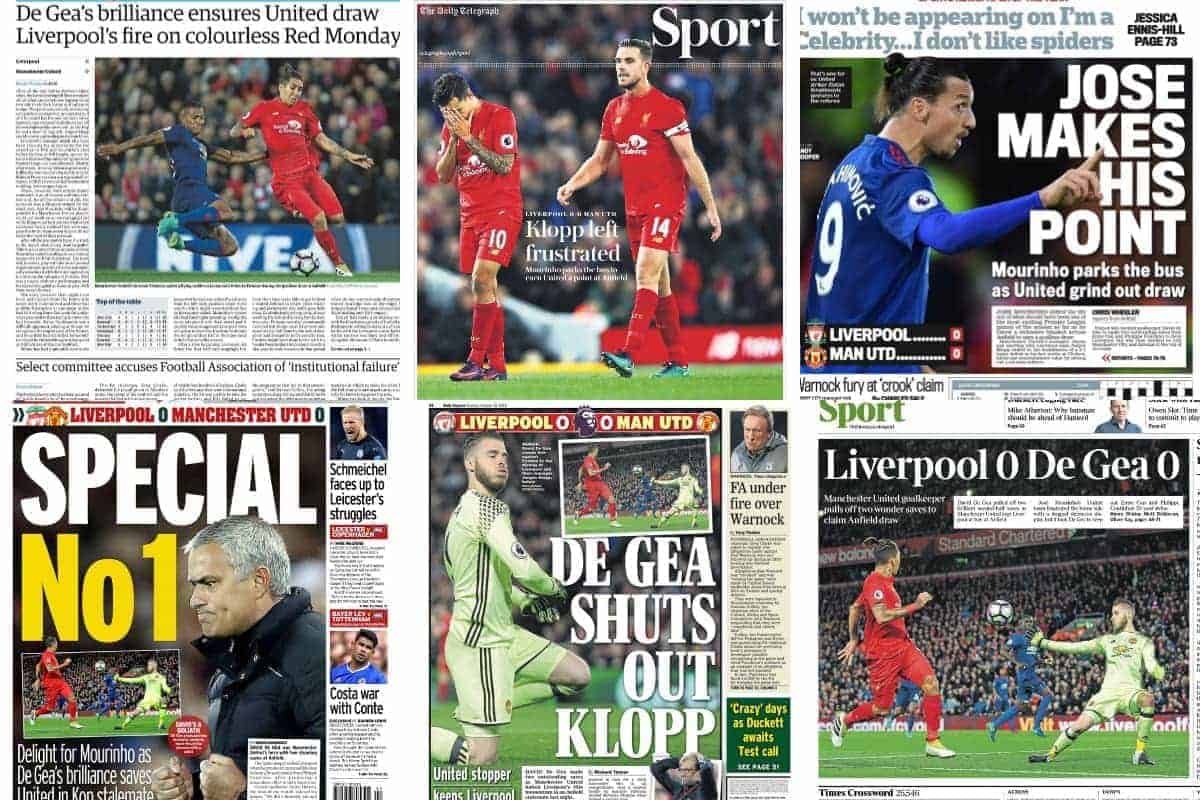 The watching media felt Liverpool lacked intensity and composure in their passing play as the Reds were held to a frustrating stalemate by Jose Mourinho’s Man United at Anfield.

Liverpool marked their return to Premier League action with a goalless draw against Mourinho’s men, who earned the point they had set up to claim on Merseyside.

It was a flat performance from the Reds, who struggled in the first half but improved after the break, and they could have won it had it not been for two excellent saves from David De Gea who denied Emre can and Philippe Coutinho.

Despite a frustrating result, positives can be taken from Liverpool keeping a long overdue clean sheet and that defeat was avoided upon return from the international break in a trickily timed grudge match.

Here is how the media reacted to an anti-climactic night at Anfield.

Reporters felt Liverpool lacked their usual intensity and energy in and out of possession, making for a comfortable night for Mourinho’s physical and disciplined United side.

As it turned out this was not a night when Liverpool lived up to their manager’s vision, it was one when their football lacked the intensity that he demands, never mind came close to matching the fury of their previous home performances against Leicester City and Hull City.

But it simply didn’t happen. Rather than be energised by the electric atmosphere and stamp their authority on the contest from the start, Liverpool looked like a team wracked by nerves and anxiety.

David Usher, for ESPN, felt the Reds were too tentative in applying pressure in midfield:

The first-half performance was sloppy and tentative. Jurgen Klopp cut a frustrated figure on the touchline as too often his players stood off in midfield rather than apply pressure to the man on the ball.

Chris Bascombe, of the Telegraph, thought Liverpool’s came unstuck against their own plan:

Instead United began trying to inflict Klopp’s strategy on his own side. United pushed upfield, Liverpool’s defenders had no time on the ball and hurriedly played it long to the helpless Daniel Sturridge.

His side’s promising start to the season has been built on pressing opponents into submission – a high-pressure style that has brought victories at Arsenal and Chelsea, as well as nine goals in two home wins against Leicester City and Hull City.

But Mourinho picked a powerful, athletic side and instructed them to turn the tables on Liverpool’s pressing game.

Meanwhile, Goal’s Melissa Reddy felt the Reds lost their composure, and allowed United to dictate how the game played out:

Mourinho coaxed his opponents into a physical, aerial fight fully aware United could not triumph in a pass-and-move contest. Liverpool were uncharacteristically obliging, rushing into loose passes, thoughtless long balls and clueless clearances. Klopp’s fury was flung in every direction as his men seemed to have none.

Liverpool’s efforts in recreating the slick, va-va-voom attacks which had previously been their forte this season too often petered out into nothing as they lacked the patience to play their natural game and, as a result, penetration.

With Klopp forced into making two changes to his in-form team due to injuries, reporters centred on how Liverpool missed the energy of unfit duo, Adam Lallana and Georgino Wijnaldum.

Reddy felt the Reds missed Lallana in particular, with his energy key to setting the tone.

Part of Liverpool’s problem in the fixture was the presence of Adam Lallana on the bench rather than in the first 11 due to his fresh recovery from a groin issue.

The England international is the funnel for the Anfield outfit’s press, is their link-man extraordinaire, as well as their shot of effervescence and intelligence.

The Mirror’s Liam Penderville thought Wijnaldum’s absence was felt most:

On Merseyside, he has been excellent though and his absence was felt by Jurgen Klopp‘s men against United.

Wijnaldum has added power and dynamism to the midfield while also providing the stability for the likes of Coutinho, Firmino and Mane to flourish.

Meanwhile, the Guardian’s Andy Hunter thought Liverpool missed midfield both in equal measure, and it was reflected in a disjointed midfield display:

They have enhanced Liverpool’s threat and ability to harry opponents according to their manager’s wishes, but injury deprived Klopp of two thirds of his preferred midfield and it had a major bearing on Liverpool’s performance.

The changes meant Philippe Coutinho played in midfield for most of the night, and Hunter also felt the Brazilian being further back hampered Liverpool’s attacking play:

A reduction in the home side’s menace and movement was inevitable with their creative force 50 yards further away from David de Gea’s goal, but the extent of its impact clearly shocked and enraged Klopp.

Pearce felt Emre Can and Daniel Sturridge, who entered in place of the missing duo, were both “well off the pace.”

Their absence from the starting line up handed opportunities to Daniel Sturridge and Emre Can but both replacements were well off the pace. This was Can’s first Premier League start of the season and it showed as the German’s touch regularly let him down.

On a night of below-par individual performances, reporters gave their assessments on who struggled at Anfield, with Daniel Sturridge and Loris Karius in particular coming under scrutiny.

Penderville was among the many reporters who felt Sturridge wasted a chance to prove his worth:

With Lallana not fit to start, this was a big opportunity for Daniel Sturridge to prove himself to Jurgen Klopp. Put simply, he didn’t do it.

He managed just one touch inside the United area before he was brought off before the hour mark.

Barrett was also among the journalists to question Sturridge’s suitability to Klopp’s style, after the striker turned in a anonymous display in which he was often on a different wavelength to his teammates.

The usual platitudes about his peerless finishing, his goals to games ratio and his undoubted ability will continue to be rolled out but this is not a team which is built around him and it does not appear to be one to which he is willing to bend his own talent for the benefit of others.

What should trouble Sturridge most as he finds himself at odds with so much of what is happening around him is that Liverpool’s attacking threat increased significantly after he had been replaced by Adam Lallana.

Penderville felt Karius again struggled, and questioned whether the German is an upgrade on Simon Mignolet:

A decent shot-stopper but he simply can’t deal with crosses into the box, flapping at the ball on multiple occasions under no pressure whatsoever.

It is likely Mignolet’s lack of aerial ability that forced Klopp to change his No.1 but as yet, Karius is proving no more convincing than the much-maligned Belgian.

Meanwhile, Pearce felt Liverpool’s New No.1 struggled with his distribution in particular:

Karius’ ability with the ball at his feet is supposed to be the one big advantage that he has over Mignolet but he’s kept that talent well hidden during the early stages of his Reds career.

However, Usher praised a big performance from James Milner:

United may have felt they could use the pace of Marcus Rashford to get at Milner, but the youngster got little change out of the veteran. Milner often does the job of two players on that left side and he made his presence felt at both ends of the pitch before eventually being forced off after playing on through two heavy knocks picked up while attacking.

And though a disappointing night overall, some reporters found positives from the events at Anfield:

Pearce felt it was a point that could prove useful, despite being a chance missed:

It was undoubtedly an opportunity missed. However, when the dust has settled this result should do little to burst the bubble of optimism which has grown steadily over the past two months.

And Usher drew optimism from a first clean sheet of the season:

A first clean sheet of the season will hopefully go some way toward establishing some much needed defensive stability.