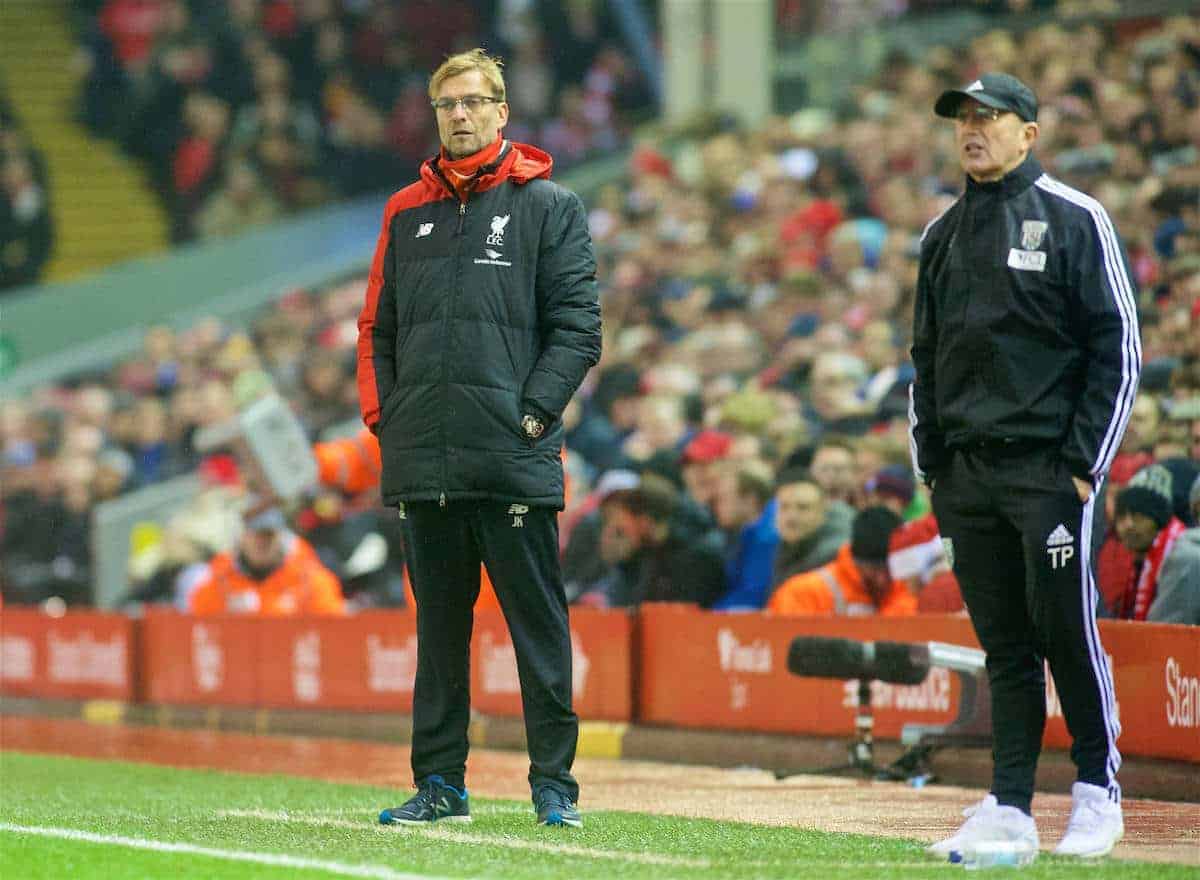 Liverpool have a second home Premier League game in five days on Saturday, as Tony Pulis’ West Brom side look to spoil the Anfield party.

It may be nearing the end of October, but the visit of the Baggies is still just the Reds’ fourth home league match of the season.

Monday’s disappointing 0-0 draw with Man United were the first dropped points at Anfield in 2016/17, having thumped Leicester City and Hull City prior to that.

Having had to endure Jose Mourinho’s negative tactics for 90 minutes, Jurgen Klopp‘s side will again come up against a side famed for their defensive nous on Saturday.

Pulis doesn’t gain any plaudits in terms of his attacking play, but what cannot be ignored is how well-drilled his teams always are.

Liverpool will need to be patient and ruthless against West Brom – something they struggled to be against United – with three points crucial in their quest for a top-four finish and possibly even title glory.

The Reds currently sit fourth in the table and just two points adrift of leaders Man City, and a kinder offering of fixtures now await them.

Saturday must be the start of a strong run of results in those matches, in order for their hard work in the early months not to be undone. We spoke to West Brom supporter and writer Heidi Turner (@Heidi_wba) to get her thoughts on this weekend’s clash.

Are you content with West Brom‘s start to the season? You’ve gone quietly about your business in typical fashion.

I’m much happier now than I was heading into the season! We are currently mid-table, where it is expected that we will be come the end of the season and the fact Albion have only lost twice this season is testament to the effort the players have displayed.

On the whole, the summer transfer window was poor from an Albion point of view but Nacer Chadli has been outstanding since joining the club. Albion were devoid of any creativity last season, and Chadli has offered this in abundance.

Happy with the job Tony Pulis is doing? Are you one to accept defence-minded football if you are getting results?

It will come as no surprise to read that Albion have drawn more times this season than any other Premier League team, and that is a statistic that has ‘Pulised’ stamped all over it.

The defensive approach has seen us grind out some impressive results over the last year or so as we’ve taken points from Manchester United, Arsenal, Tottenham and Liverpool. Player for player these games should not be a contest but Pulis has got the whole team working hard, organised and resilient. It’s a far cry from when Albion regularly shipped 4 goals or more against tougher opposition.

The frustration with the Pulis approach is when Albion come up against average opposition. Last season the Baggies dropped points against all three relegated teams, and failed to register a shot on target in seven games. Realistically mid-table is the best we can expect from Albion in the league but setting out not to lose rather than going out on the front foot against teams of our level has led to a sense of apathy amongst supporters.

Pulis made no secret about his disappointment in the last transfer window, as Albion spent much of the summer faffing, and our famously prudent then-owner Jeremy Peace did not exactly back his manager with funds.

It will be interesting to see whether Pulis is backed in January by the new owners, and quite what the new owners think of our head coach’s approach to games.

Which Liverpool players are you most fearful of ahead of Saturday’s game?

Adam Lallana has a tendency to score against Albion and will no doubt be a threat from the start or from the bench. Mane is another obvious threat. As resillient as Albion’s defence is, it lacks pace – especially in wide areas.

The suspended Jonny Evans, who has been nothing short of superb since joining the club, will be a huge miss. It is the pace that Liverpool have at their disposal that gives me the most cause for concern.

How do you expect the match to pan out? The Baggies to get more points at Anfield?

For the most part, Albion have enjoyed recent trips to Anfield and we were unfortunate not to come away with all three points last season. My heart says Albion will end the game with 20% possession but win 1-0 from a set piece goal! My head, however, says it will be a tough afternoon and that Liverpool will have too much for us.

Despite fearing a thrashing, I’ll go with 2-1 Liverpool.

Klopp has been boosted by the news that Georginio Wijnaldum returned to full training on Wednesday, having picked up a hamstring injury for the Netherlands last week.

Adam Lallana is also back fully fit, having produced an impressive second-half cameo on Monday, and James Milner has recovered from a knock that saw him replaced by Alberto Moreno late on.

Daniel Sturridge had a bad night at the office against United, and may find himself relegated to the substitutes’ bench, with Roberto Firmino slotting back into a central role.

Emre Can will do well to keep his place, should Wijnaldum and Lallana be deemed fit enough to start, and Loris Karius will continue in goal, despite a slightly nervous last couple of appearances.

West Brom are without Jonny Evans because of suspension, which is a big blow to Pulis, but the West Brom manager has no injury concerns whatsoever.

Even long-term absentee Chris Brunt is now back fit, having come on as a second-half substitute in the 1-1 draw at home to Tottenham last weekend. The Liverpool manager spoke about the competitiveness of the Premier League:

“The differences between the Premier League and all the other leagues in world football is that (there are) big individual qualities in all of these teams.

“I think we all know the reason for it and that’s the big difference.

One to Watch: Nacer Chadli Having struggled to nail down a regular place in Tottenham‘s side last season, Nacer Chadli made a club-record £13million move to the Hawthorns in the summer.

The Belgian has made an immediate impact, with his all-round quality and eye for goal from midfield a cut above his teammates.

He has already found the net four times in five Premier League appearances for West Brom, and Liverpool have to keep a close eye on him on Saturday.

Strong, powerful and deceptively quick, Chadli is looking every bit the player the Baggies hoped they would see.

Liverpool are the overriding favourites to leave Anfield with all three points in the bag, potentially moving to the top of the table in the process.

Coverage is live on BT Sport 1 from 5pm (BST), with the match getting underway at 5:30pm.