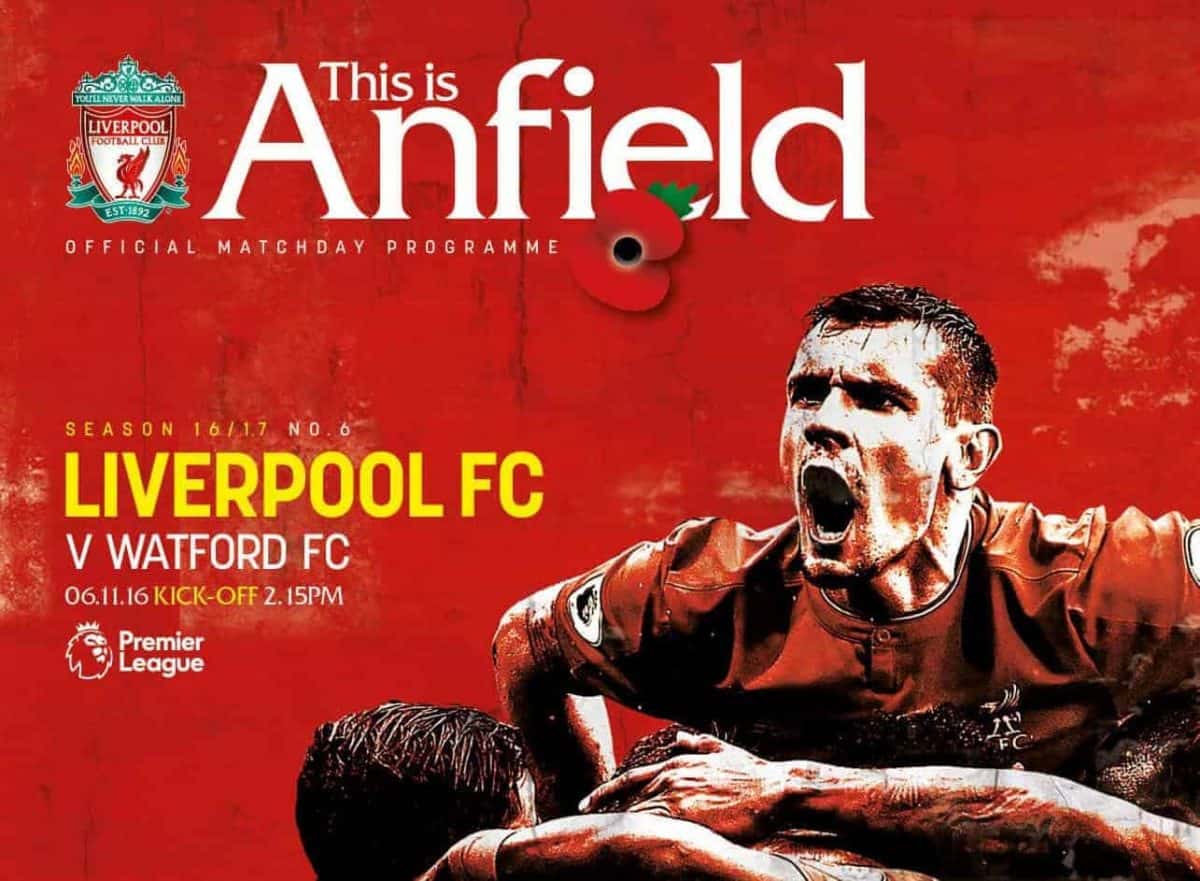 The Kop magazine’s Chris McLoughlin previews the Reds’ home match against Watford with some interesting stats and a preview of Jurgen Klopp‘s programme notes on Sunday.

Maths was never my strongest subject at skool, 107% of my teachers would tell you that, but as a journalist I’ve learnt that statistics are there to be manipulated to support whatever argument you’re making or completely ignored.

However, there are some cracking stats in Sunday’s Liverpool versus Watford matchday programme that don’t need to be manipulated to show the Reds’ progress under Jurgen Klopp less than a year since the Hornets inflicted his heaviest defeat as LFC boss down at Vicarage Road. Liverpool were so bad during that 3-0 reverse I suspect they’d still have beaten us with the vicar in goal and two choirboys up front, so thank God things are different now.

Such a stat is hugely encouraging, although when you consider that we went on to finish 4th in ’94/95 and 7th in ’09/10 it proves a good start doesn’t necessarily end in a good finish, something Arsenal have become specialists in.

Stat six (told you I was bad at maths): 12 different players have scored in Liverpool’s opening 13 games, in all competitions, so far this season.

Which is an even better return given we only scored in 11 of those 13 games with goalscoring midfielders Gini Wijnaldum and Marko Grujic yet to get off the mark. Which they will as soon as I stop backing Wijnaldum to net first at double-figures odds.

To put that into perspective, when Brendan Rodgers’ Liverpool netted 110 goals in 2013/14 the Reds only had 13 different scorers. And one of them was Iago Aspas, who found the corner of the net easier against Oldham than he found taking a corner against Chelsea.

While at Crystal Palace last Saturday a remarkable feat occurred for the first time since 1968 (which incidentally was the year before Selhurst Park’s Arthur Wait Stand was built and so-named because you have to Wait Arthur day to get through the turnstiles there).

Dejan Lovren had already atoned for his shocking error (note to Loris Karius, jumping with your arms in the air gives you more chance of saving a ball) by powering home a header when Joel Matip went forward for another Philippe Coutinho corner. He shook off the attentions of his marker before leaping like a huchen to smash a header past Steve Mandandandandandanda to net his first Liverpool goal and create a little piece of modern history.

It was the first time that both of Liverpool’s starting centre-halves had scored in the same league game since Big Ron Yeats and Anfield Iron Tommy Smith did so at home to Leicester City in September 1968.

You might therefore think such a thing is a freak occurrence if it’s only happening every half-a-century, but go back to April and you’ll recall that Lovren and Mamadou Sakho – who I fear may have been taken by Liam Neeson after his ‘I will find you and I will kill you’ impression for LFCTV that very same month – did precisely the same in Europe to see off Borussia Dortmund on one of Anfield’s greatest ever nights.

For a team that is perceived (mainly by Liverpool fans) as being rubbish from corners, at both ends of the pitch, that’s quite a co-incidence. Except it isn’t a co-incidence at all. More an indication of how teams managed by Klopp operate.

Everything is geared towards a collective effort. Pressing. Assisting. Defending. Passing. Attacking. Scoring. The name on the back of the shirt doesn’t matter to Klopp, only that whoever is wearing it works for the team and maximises their own personal qualities by taking responsibility for what they are especially good at. I’ll give you an example.

Coutinho, who works his cojones off, has had the second most shots in the Premier League this season. At times I hear groans of frustration at Anfield when he tries to shoot from too far out, too often, and it doesn’t come off. Those groans aren’t replicated in the Anfield dressing room.

Klopp wants Coutinho to shoot as often as he can and moans at him when he doesn’t try his luck. Yes, he wastes a few opportunities, but the result has been that a player who delayed shooting on too many occasions when first arriving from Inter Milan has now scored 16 of his 33 Liverpool goals in a year of playing under Klopp compared to netting 17 goals in almost three years under Brendan Rodgers. People talk about how much Adam Lallana has improved under Klopp – and he has – but for me it is Coutinho who has flourished the most since the German was appointed.

Yet, in keeping with how Klopp does things, Little Phil isn’t a mega-star and the team isn’t built around him in the way that previous Liverpool sides have been built around individuals. Nobody stays in the same attacking position long enough to build anything around them anyway under Klopp, but it now means that when Coutinho (who also has four PL assists this season) has an off-day the Reds have Lallana, Mane, Firmino, Sturridge and Origi who are capable of stepping up more often than not.

Which brings me to my final stat. A fate-tempting one that reveals Liverpool are now on an 18-match unbeaten run at Anfield having lost just three times at home (to Palace, the Mancs and Stoke in the League Cup, but we won on pens) since Klopp took charge.

That’s a good little run on the quiet, but being quiet – and complacent about it – is something Klopp makes a point of mentioning in his programme notes:

“We are here today for an early-afternoon Sunday kick-off, but there is no reason why the atmosphere cannot be special. The fans have played a huge role so far but, as with the players, they need to continue on this path. The matches at Anfield this season have been perfect for us in terms of the atmosphere playing a role in helping the team. The same level of performance would be perfect.”

The message is typical of him. ‘We’re doing our bit, make sure you do yours, it’s all about the collective here, that’s how we’ll achieve something’. Which is something that 100% of Kopites want to see under the management of Jurgen Klopp.

• Chris McLoughlin (@TheKopMagazine) writes for the This is Anfield matchday programme and LFC Magazine (in which you’ll find a boss piece on the LFC v Leeds rivalry in the new edition). You can get copies of both from sportmediashop.com, Anfield or official club stores.