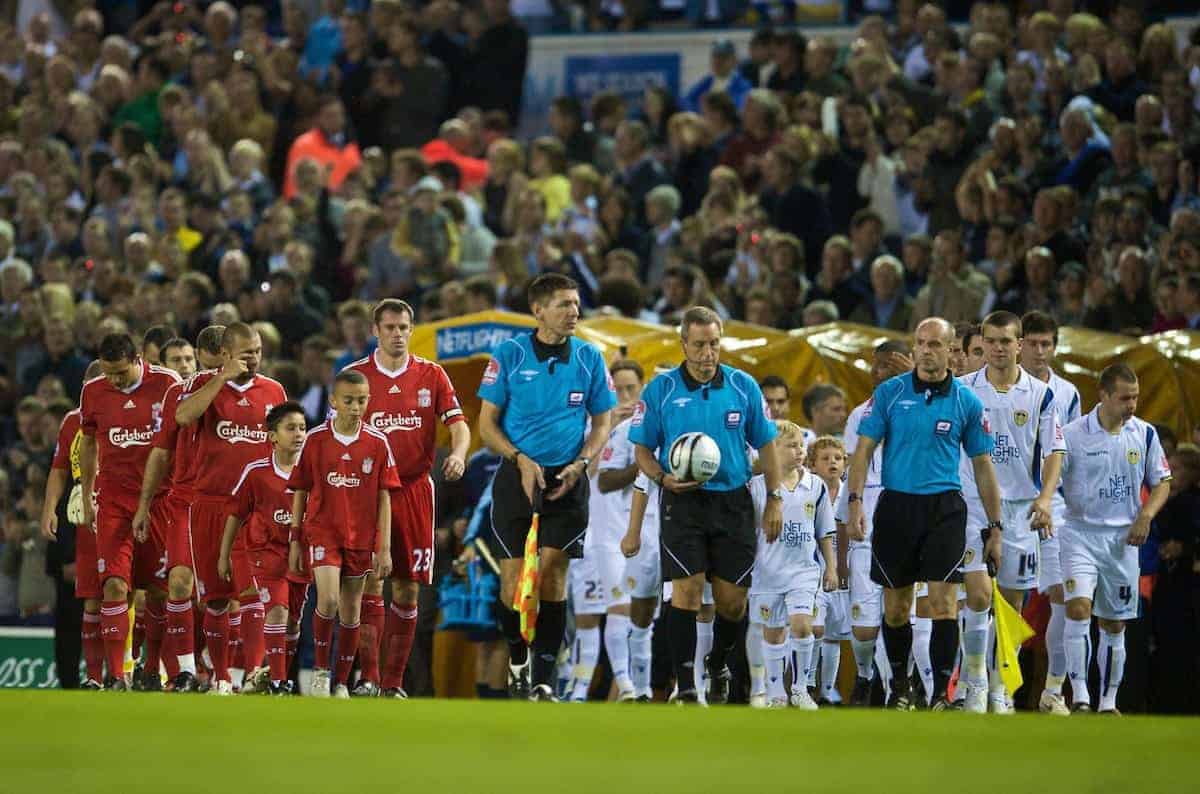 As Liverpool prepare to take on Leeds United in the quarter-finals of the EFL Cup on Tuesday night, we look back on the last meeting between the two sides seven years ago.

Liverpool had finished runners-up in the Premier League the season before and had reached the quarter-finals of the Champions League before being knocked out by rivals, Chelsea.

It was the Reds best chance to win the title for over 20 years under Rafa Benitez, before Brendan Rodgers’ side almost achieved the feat in 2014.

Steven Gerrard had captained the side to their second European final in two years in 2007 and they were still considered one of the biggest clubs in Europe going into the 2009-10 campaign.

However, summer exits for Xabi Alonso and Sami Hyypia marked the start of a downfall for the club and the season ahead would bring further disappointments. A number of new faces joined, including Glen Johnson and Alberto Aquilani, but many would prove to be a failure.

By the time they faced Leeds in September 2009, they had won five out of their first seven fixtures of the season but losses against Aston Villa and Tottenham highlighted concerns.

Fernando Torres had might another bright start to the season but he would later suffer from a number of injuries and his final full campaign with the Reds would be littered with set-backs.

Liverpool were presented with a tough challenge from the then-League One side and they had to grind out a result at Elland Road to make it through the third round of the Carling Cup.

Leeds were on top form in the league and went into the game on the back of 15 straight home victories so it was no surprise Liverpool were presented with a challenge.

Benitez named a side consisting of a number of fringe players, including Philipp Degen, Sotirios Kyrgiakos and Ryan Babel and they were almost embarrassed by the organisation of their opponents.

The first half steered in Leeds‘ favour and they were unlucky not to have taken the lead when Lubomir Michalik’s headed goal was disallowed. The decision was a controversial one and the assistant referee, who claimed Jermaine Beckford was offside and interfering, came under huge criticism from the Whites’ support.

Leeds had other opportunities too but Michael Doyle, Roberto Snodgrass and Beckford all sent their efforts wide and Liverpool’s weakened side were given chances of their own in the second-half.

The Reds went into the half-time break breathing a sigh of relief after an opening 45 minutes filled with mistakes, Leeds‘ attacks and a number of near-misses.

Ngog was having a tough day on his own up front and had to work hard to find space among the Leeds defenders. But in the 66th minute he did after he gathered a miss-cued shot from Javier Mascherano, turned the defender and found the back of the net with a composed side-foot finish.

It was the Frenchman’s second goal during the campaign in only his third appearance, though it wasn’t enough to retain his place against Hull City the following week as Torres came back into the side to score a hat-trick.

The lone striker had done his job and after 78 minutes he came off for Steven Gerrard as Benitez made three late changes to seal the win. Martin Skrtel and Glen Johnson replaced Degen and Babel, as Liverpool hung on to take home an unconvincing 1-0 victory.

Benitez was pleased with the result and after making nine changes to the starting line-up by resting a number of senior players, he seemed relieved to come through unscathed.

“We won with a lot of players not playing and I am really pleased with my team, with the squad,” he said. “These kind of games are very important to keep the quality of character. I think it was a fantastic win for us.”

Liverpool’s second string had done enough to win the game but it was a performance to forget from the Reds and they will be hoping to produce a better performance on Tuesday when Jurgen Klopp‘s side hope to sweep aside the in-form Championship club.

Liverpool’s Carling Cup run didn’t last long and they lost to Arsenal 2-1 at the Emirates in the next round. Benitez named a side mixed with youth and experience against the Gunners and they were punished.

The 2009-10 season was a long one and it was the start of a gradual downfall for Liverpool, who had enjoyed European success just four years previously.

The Reds didn’t even make it through their Champions League group, finishing 3rd to Fiorentina and Lyon but did battle on in the Europa League before losing to Atletico Madrid in the semi-final.

The Spanish outfit went on to win the competition but Liverpool’s failure to do so ultimately cost them in the end as they finished in 7th position in the Premier League and missed out on a Champions League spot.

It would take six years for Liverpool to get back into the competition after Tom Hicks and George Gillett’s arrival at the end of the season kick-started a period of off-field turmoil for the club.

Liverpool would wave goodbye to Benitez in June 2010 after the Spaniard’s fall-out with the unpopular club owners escalated beyond repair.

The Reds’ top-goalscorer, Fernando Torres, along with midfielder Javier Mascherano, would later join him through the exit door after Roy Hodgson was appointed manager following Benitez’s sacking.