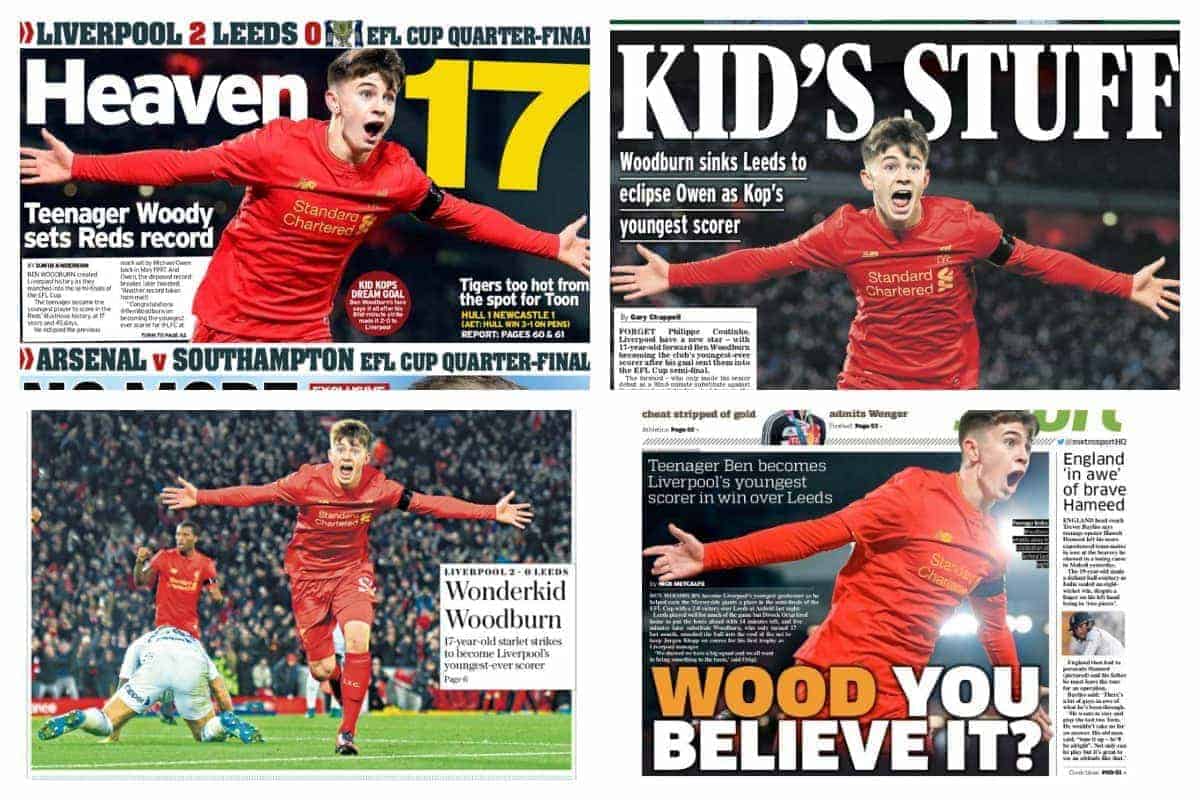 The media were unimpressed by Liverpool’s performance but were full of praise for the youngsters involved, especially Ben Woodburn, as the Reds reached the League Cup semi-finals with a 2-0 win over Leeds.

The Reds moved a step closer to earning a first piece of silverware under Jurgen Klopp with victory at Anfield.

Patience proved key again as two goals in the final 15 minutes, like against Sunderland, from Divock Origi and a record-breaking strike from Woodburn ensured the Reds progressed from a difficult tie against Garry Monk’s men.

Klopp can be pleased with the efforts from a much-changed team, especially with the youngsters who all caught the eye with impressive displays.

Though far from at their fluid best, they deserve credit for getting the job done.

Liverpool will now eagerly await Wednesday’s draw, and here is how the media assessed a night when history was made at Anfield.

Despite the positive result, reporters were largely disappointed by Liverpool’s performance, particularly the displays of the senior players involved, with certain journalists feeling the Reds were second best on the night

The Mail’s Ian Ladyman was unimpressed by the performances of Liverpool’s senior players in particular:

“This was an occasion when Liverpool had not played well. Too many of the senior players asked to play in an under-strength team failed manager Jurgen Klopp.

“As it turned out, it was the likes of Origi, Emre Can, Sadio Mane and [Georginio] Wijnaldum who were the passengers here.”

“Without that attacking threat, the home side lacked fluency and potency in the final third until they clicked in the final 15 minutes to reach a record 17th League Cup semi-final.”

The Liverpool Echo‘s James Pearce felt Georginio Wijnaldum particularly struggled in the advanced role he was deployed in:

“Wijnaldum found himself operating further forward on the left of a front three with Origi and Mane but Liverpool created precious little.”

The Telegraph‘s Chris Bascombe feels Klopp could be concerned after those incoming did little to prove their ready to deputise as injuries mount:

“Liverpool’s attack was toiling and its midfield lacking snap. The worry for Klopp is many of these players are those that need to step up during the five-week absence of Philippe Coutinho.”

“Klopp says he will look for another hitman when the transfer window opens—and he needs one on the evidence of tonight.”

ESPN’s Mark Ogden believes the below-par display gives Klopp a decision to make with his selection in the next round:

“But having got the result he wanted, will Klopp stick to his selection policy in the semifinal in order to keep his squad fresh for the league, or will he choose to wheel out the big guns?

“This time, Klopp has to decide whether to risk fielding weakened teams in a two-legged semi-final, rather than risk jeopardising title hopes or go for broke in order to give the club the best possible chance of winning silverware.”

However, certain reporters took a more positive outlook to the night’s work, taking the win in context as an excellent season for Liverpool continues.

Melissa Reddy, writing for Goal, praised Liverpool for delivering another result despite the changed team:

“Klopp promised ‘something special’ from his side ahead of the season, and they have certainly been delivering—regardless of how many alterations the manager makes to his line-up.”

The James Pearce also focussed on Klopp’s side getting the job done, as an excellent season moves forward again:

“Liverpool are 15 games unbeaten, a point off the top of the Premier League and one step away from a Wembley final.

The Mirror‘s David Maddock believes another latter-stage progression in the competition shows Liverpool are rising again:

“It is also their sixth semi-final in all cups in four years, and hints strongly at where Liverpool are going. As Klopp said afterwards, these are times of genuine hope for the club, and a time to dream.”

But Bascombe felt that even though Liverpool boasted a much-changed side, the performance was still not good enough:

“As in the previous round, Klopp’s selection reflected how the Premier League is the greater priority. Nevertheless, that was hardly an excuse for the sloppiness exhibited by the home side for so much of the evening.”

Meanwhile, Ogden thinks Klopp’s squad lacks the strength in depth needed to compete on all fronts, despite Liverpool coming through the last two rounds to reach the semi-finals while deploying rotated sides:

“Because on this evidence, the likes of Ragnar Klavan, Alberto Moreno and Divock Origi (despite his late goal) fall short of the quality required to make a difference at the highest level.” There was, as expected, plenty of positivity over the displays of Liverpool’s youngsters, with heaps of praise being reserved for record-breaker Woodburn, following a goal that will live long in the memory.

First of all, the Independent‘s Simon Hughes praised the trust shown by Klopp in Anfield’s emerging talent:

“It would be an understatement, though, to say these are times laden with opportunity for young players under Jurgen Klopp, who spent virtually all of his post-match press conference simultaneously trying to dampen expectations, especially of Woodburn—while also spreading the praise amongst others.”

The Liverpool Echo‘s Andy Kelly reflected on a proud night for Liverpool’s academy:

“It was a night to focus on youth—Jurgen Klopp‘s lineup told us that—and like Woodburn and Alexander-Arnold, Ejaria seems intent on making his way at a rapid pace.

“What a gem of a night for Liverpool’s Academy.”

Kelly also saw a “classic” display from the hero of the night, Woodburn:

“It was a classic Woodburn performance. He hadn’t been that eye-catching after replacing Kevin Stewart on 68 minutes but there he was—right time, right place, right result.

“Fifteen years to the day after Robbie Fowler left Anfield to join these quarter-final visitors, has another new hero of the Kop been born?”

“Ben Woodburn may get all the morning headlines but he probably wasn’t Liverpool’s most impressive teenager on the night.

“That honour belonged to Trent Alexander-Arnold.

“Keen for the ball, happy to hold it, looking to burst forward when the occasion demanded it.”

“Probably nothing to worry about at this stage but Sadio Mane was once again not at his best. With Philippe Coutinho out for several weeks, Liverpool will need Mane back on top form soon.”

Finally, Kelly rounded off by noting an assured display from stand-in stopper, Simon Mignolet, who he feels isn’t giving up the battle for the No. 1 shirt:

“But Mignolet looked solid. One weakish punch aside he looked like a man on a mission.

“He wants that place back. He’s not going away.

“Some good low saves were made when required and he looked calm and assured.”