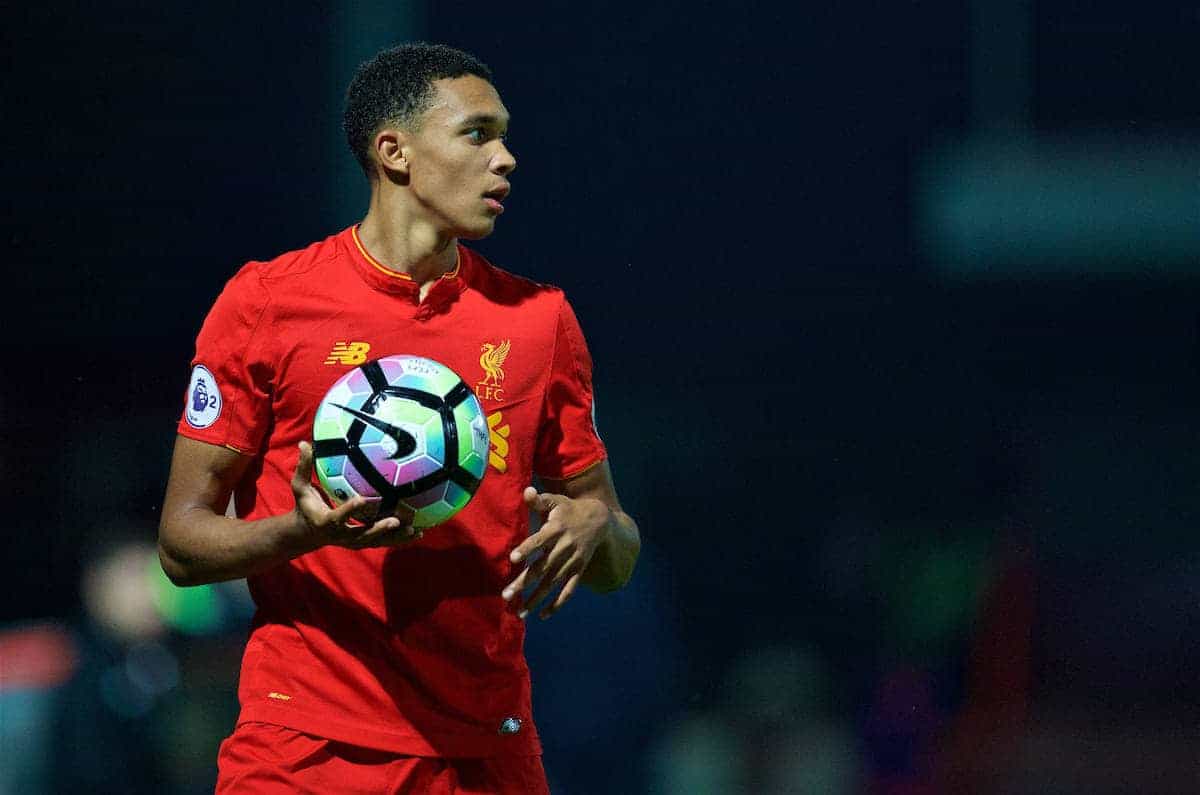 Academy star Trent Alexander-Arnold made his debut in Liverpool’s 2-1 victory over Tottenham last week, hinting at a bright future.

The versatile player was part of a much-changed Reds side that sealed progress to the quarter-finals of the competition, playing 68 minutes of an enthralling encounter.

Following the likes of Ryan Kent, Sheyi Ojo, Danny Ward and Ovie Ejaria in making his first appearance for the Reds under Klopp, Alexander-Arnold became the 17th player to be handed his debut by the German.

Taking to the field just 18 days after his 18th birthday, he also became the youngest player to make his Liverpool bow during Klopp’s tenure, itself serving as a marker of his quality.

In Alexander-Arnold, Klopp has a star of the future, and a multi-talented young player fit for moulding into his system over the coming years.

Lining up alongside Lucas Leiva, Ragnar Klavan and Alberto Moreno in a new-look back four for Klopp, Alexander-Arnold was by far the least experienced player in the Liverpool defence.

Stationed at right-back, the youngster was tasked with emulating the efficiency of Klopp’s regular selection, Nathaniel Clyne, who sat out for the first time this season.

Required to both stymie Spurs’ attacking forays down the left wing and provide support for the likes of Georginio Wijnaldum, Marko Grujic and Divock Origi in attack, Alexander-Arnold’s role was a demanding one.

Aside from one exuberant early foul on Spurs left-back Ben Davies, which Mauricio Pochettino believed warranted a sending off, Alexander-Arnold was largely solid.

He made one successful tackle, three interceptions and one clearance, which is a positive output given he was hampered by an early yellow card.

Furthermore, in possession Alexander-Arnold showcased his composure, making more touches (49) than all but five Liverpool players, creating two chances, though he was unable to deliver an accurate cross and completed just 78.6 percent of his attempted passes. His opposite number, Moreno, made four successful tackles, two interceptions, two clearances, 83 touches (the joint-most of any player), completed 90 percent of his passes and made two accurate crosses.

But to compare the two would be reductive, with the Spaniard closing in on his 100th appearance for the Reds.

It was reasonable display that showcased his rampaging style at full-back, though limited in his use of the ball and over-enthusiastic in his defensive play—in short, it was a typical 18-year-old’s debut.

Tellingly, though Davies was preoccupied by Liverpool’s bold attacking play, the Welshman and left winger Georges-Kevin Nkoudou made no key passes or accurate crosses between them, rarely reaching the byline to provide service for striker Vincent Janssen. That Alexander-Arnold, making his Liverpool debut at the age of 18 and lining up against two experienced talents, was not mercilessly exploited, is an indicator of his quality.

Quite where he goes from here remains to be seen, with Alexander-Arnold’s versatility and so-far untapped potential ensure his future is difficult to project. As Steven Gerrard’s description of Alexander-Arnold in his biography My Story attests, the teenager is an interesting prospect, physically and tactically.

“Trent Arnold has a terrific chance of making it as a top professional,” the former Reds captain wrote, “he’s quite leggy but he’s got a lovely frame and seems to have all the attributes you need.”

Standing at just over 5’7″, Alexander-Arnold is built with a wiry frame, and this allows him to cover ground quickly and efficiently.

Clyne is the same height, and it is easy to draw comparisons with the England international in their approach in both defence and attack.

Neither are afraid of a challenge, and both are willing and able to drive up the field to support forward charges, with their pace allowing them to track back swiftly to recover.

This is likely why Under-23s manager Michael Beale has utilised Alexander-Arnold at right-back throughout the campaign so far, and this will have informed Klopp’s gameplan against Spurs. But as his performances during pre-season proved, he is also able to thrive in different roles.

A surprise inclusion for the Reds’ summer friendlies, Alexander-Arnold often found himself deployed in a box-to-box role in Klopp’s three-man midfield in the 4-3-3; the same attributes were on show, but with a more ambitious remit.

He started in midfield against Tranmere Rovers, Fleetwood Town and Wigan Athletic, before dropping back to right-back against Huddersfield Town, AC Milan and Mainz 05, the challenges grew tougher, but Alexander-Arnold coped with the pressure.

Learning from both Clyne and Jordan Henderson, as he told This is Anfield in September, Alexander-Arnold looks set to hone this versatility, which will be a major benefit to Klopp.

Alexander-Arnold is clearly a player who features heavily in Klopp’s plans for the future, with his swift promotion from the Under-18s to his senior debut a marker of the German’s faith in his ability.

With Klopp a manager who favours tactical flexibility, and each of his players tasked with contributing in both defence and attack, Alexander-Arnold’s versatility will boost his prospects.

That he passed his first test, during pre-season, and then on a more demanding stage in the League Cup, should be encouraging to Klopp, who can now trust the 18-year-old to deliver.

However, it remains an early stage in Alexander-Arnold’s development, who will need to work on building his physique and developing his tactical awareness to establish himself at the top level.

Fortunately, as Klopp explained prior to the No. 66’s debut, he is well placed to oversee this.

“Leave them at the club under our wing and then bring them in the right moment. That’s the plan.”

At 18, having already made great progress, Alexander-Arnold is poised to blossom under the wing of Klopp, Beale, Pepijn Lijnders and, possibly in the future, Gerrard himself on Merseyside.