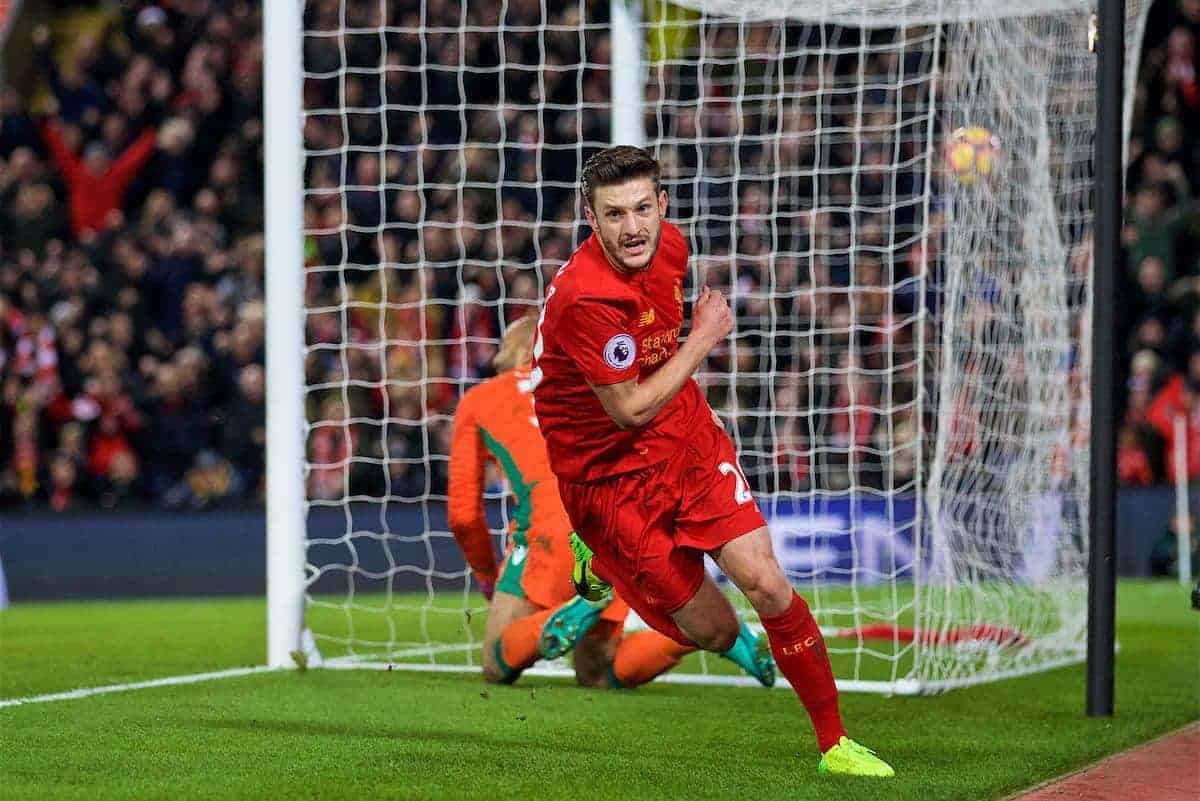 Hitting his seventh goal of the season in Liverpool’s 4-1 win over Stoke City on Tuesday night, Adam Lallana stood out as the star man.

Lallana scored the Reds’ equaliser at Anfield, cancelling out Jonathan Walters’ opener, before Roberto Firmino and Daniel Sturridge netted either side of an own goal from Giannelli Imbula.

The victory kept Liverpool on track to challenge for the Premier League title, returning to second place in the table.

After the game, This is Anfield named Firmino as Man of the Match, but with supporters providing their own ratings, it was Lallana whose performance was most highly praised.

The 28-year-old was voted as an 8.1, the only Liverpool player to receive a rating of 8 or above.

Firmino wasn’t far behind, with 7.6, with the Brazilian scoring his first goal in seven games for the Reds, after a period of poor form on the left wing.

James Milner was voted Liverpool’s third-best player on the night, at 7.5, while Sturridge’s contribution off the substitutes’ bench was recognised with a rating of 7.4.

Sadio Mane (7.3), who has two more games left before he departs for the Africa Cup of Nations, and Jordan Henderson (7.1) were the only other players rated above a 7. Despite the Reds failing to keep a clean sheet due to Walters’ early header, Ragnar Klavan was awarded a reasonable rating of 6.9, while Divock Origi‘s performance up front was arguably underrated at 6.8.

Georginio Wijnaldum, who completed 88 percent of his attempted passes, was also given a moderate rating, with 6.7.

Nathaniel Clyne (6.4), Simon Mignolet (6.3) and Dejan Lovren (6.2) did not fare as well, however, with Liverpool’s defensive stability lacking after shutouts against both Middlesbrough and Everton.

Furthermore, Sturridge’s fellow substitutes, Emre Can (6.2) and Alberto Moreno (6.1), did little to change the course of the game, and were rated accordingly.

Lallana has stood out as one of Liverpool’s most important players this season, and has been widely hailed as England’s best player, with Klopp rejuvenating the No. 20.

Liverpool’s next outing comes against Manchester City on New Year’s Eve, and on the back of three consecutive wins, Lallana and Co. can be confident of sealing another three points at Anfield.