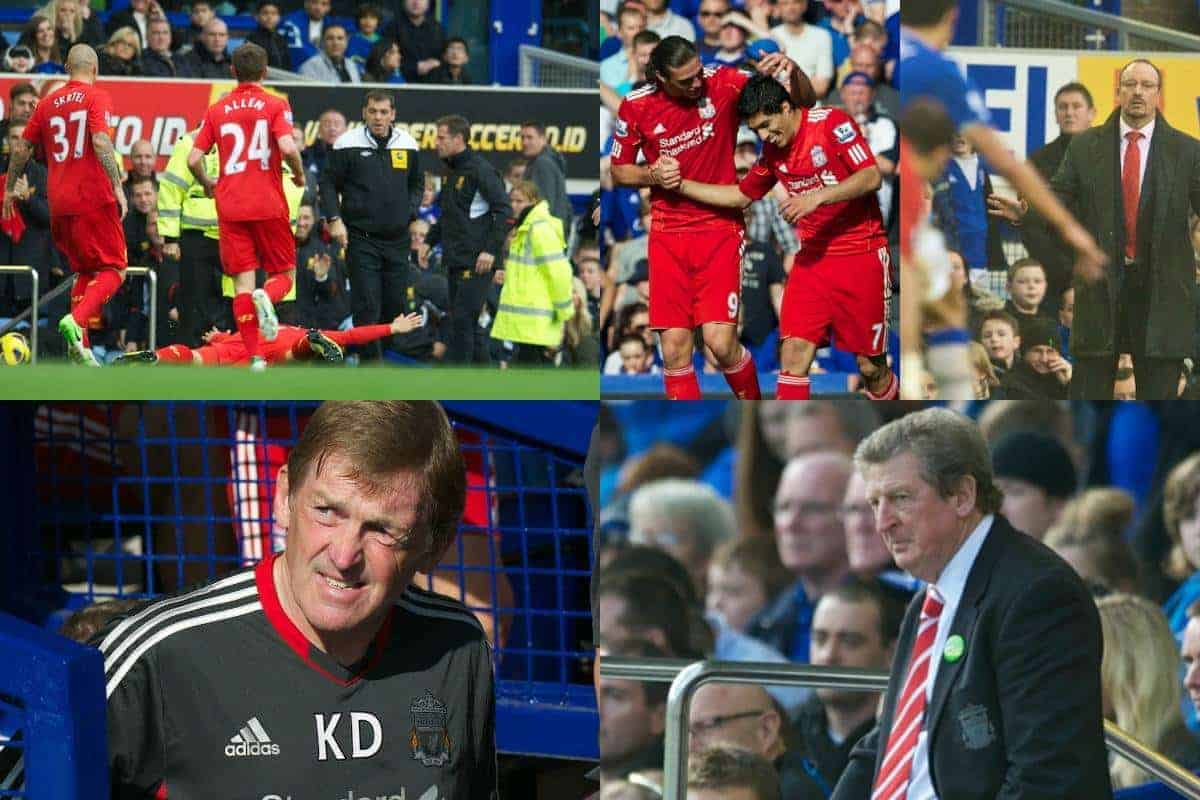 As Jurgen Klopp prepares for his first Merseyside Derby on enemy territory, we take a look at how Liverpool’s former Premier League bosses fared in their opening Goodison Park clash.

Liverpool begin the Christmas schedule with what promises to be a mouth-watering first Merseyside Derby of the season. Souness’ first Goodison Park trip as manager came the season before the Premier League’s inception – a 1-1 draw in December 1991 – so we’re slightly cheating with this one.

But the historic first modern-era Goodison derby brought a new feel to the fixture, and a turn for the worse in fortunes as the Reds collapsed to a 2-1 loss.

Mark Wright headed home Mike Marsh’s corner to put Liverpool ahead after 62 minutes, but the lead and the Reds’ grip on the contest was short-lived.

Mo Johnston equalised with a curling effort that went in off the post just three minutes later, setting up a grand slam finish.

And it was the Blues who found a winner, as ex-Red, Peter Beardsley, who switched Anfield for Goodison Park a season earlier, came back to haunt Souness by firing home a sickening late winner.

Evans was no stranger to the local rivalry when he took his Reds across Stanley Park for his first taste of the away tie as a manager.

But it proved a forgettable experience for the Anfield legend, whose side were beaten 2-0 in Joe Royle’s first game in charge of the struggling Blues.

After a goalless first-half, Duncan Ferguson opened the scoring with a powerful header before the hour-mark at the Gwlady’s Street end.

And two minutes from time, Paul Rideout capitalised on David James’ error, firing into an empty net to seal victory for Everton.

The result dragged the Blues off the foot of the table and ensured of another quiet walk home for the travelling Reds. Houllier made his Goodison derby bow while sharing the hot-seat with Evans, but after the partnership split the Frenchman faced the battle alone.

Houllier’s high-flying Reds arrived looking to avenge a 1-0 loss suffered at Anfield earlier in the season, but were held to a goalless draw.

The stalemate all but handed the title to Man United, but a miserable afternoon could have been compounded further in one of the most controversial moments in derby-day history.

Sander Westerveld’s attempted punt forward rebounded off Don Hutchinson’s back and into Liverpool’s net in the final minute.

But just as Everton thought they’d nicked a bizarre winner, the Blues discovered referee, Graham Poll, had already blown the full-time whistle – much to the home side’s fury but to Houllier’s relief. Maiden Goodison derbies have proved a baptism of fire for plenty of Liverpool managers, and this was the case for Benitez.

The Reds arrived buoyed after sealing Champions League progression on one of Anfield’s most famous night’s against Olympiakos in midweek.

But they couldn’t repeat the trick, as Lee Carsley’s curling strike beat an unsighted Chris Kirkland and proved enough to condemn the Reds to defeat.

In a rare sequence of events, the loss left Liverpool languishing in 7th place in the table, 12 points behind the 2nd placed Blues. In a list featuring numerous painful derby defeats, this one is probably the worst of the lot. I’ll keep it short-lived.

The Reds, in an increasingly sizeable mess under Hogdson and having recently been purchased by NESV (now FSG), slumped to an appalling 2-0 loss as they were totally out-played by David Moyes’ side.

Goals from Tim Cahill and Mikel Arteta either side of half-time did the damage on a day that caused embarrassment for everyone associated with Liverpool – though bizarrely not Hodgson.

Indeed, the delusional manager outrageously assessed his side’s performance as the best of the season, compounding the misery of one of the worst ever derby defeats. With some dire losses out of the way, we finally have a sweet success to look back on.

King Kenny marked his recent full-time Anfield return with a 2-0 win at the scene his first stint in charge ended 20 years earlier.

It was Dalglish’s £58 million strike-force that secured the bragging rights in fiercely contested grudge match.

The Blues went down to 10-men in the first-half as Jack Rodwell was sent off , before Dirk Kuyt then missed a penalty, firing his spot-kick wide prior to half-time.

But just as thoughts turned to potentially being held to a draw by the 10-men Blues, record-signing Andy Carroll repaid a portion of his fee as he converted Jose Enrique’s cross with 20 minutes left.

And 12 minutes later, Luis Suarez was rewarded for his persistence as he pounced on a defensive mix-up and slotted home to silence the Gwlady’s Street and seal the points.

Recent Goodison affairs have thrown up some thrilling contests and Rodgers’ first saw one of the most eventful and dramatic play out.

Liverpool roared into a two-goal lead as Suarez’s shot was deflected in – prompting one of the greatest derby-day celebrations as he dived in front of Moyes who criticised the Uruguayan ahead of the game.

Suarez then headed home Steven Gerrard’s free-kick on 20 minutes to double the advantage, but the Blues staged an instant fight-back.

Quick-fire goals from Steven Naismith and Leon Osman levelled the scores before the interval, leaving everyone anticipating a spectacular second-half.

It wasn’t until stoppage-time that the drama arrived, as Suarez saw what appeared a match-winning goal wrongly disallowed for offside, denying Rodgers a Goodison Park success at the first attempt.