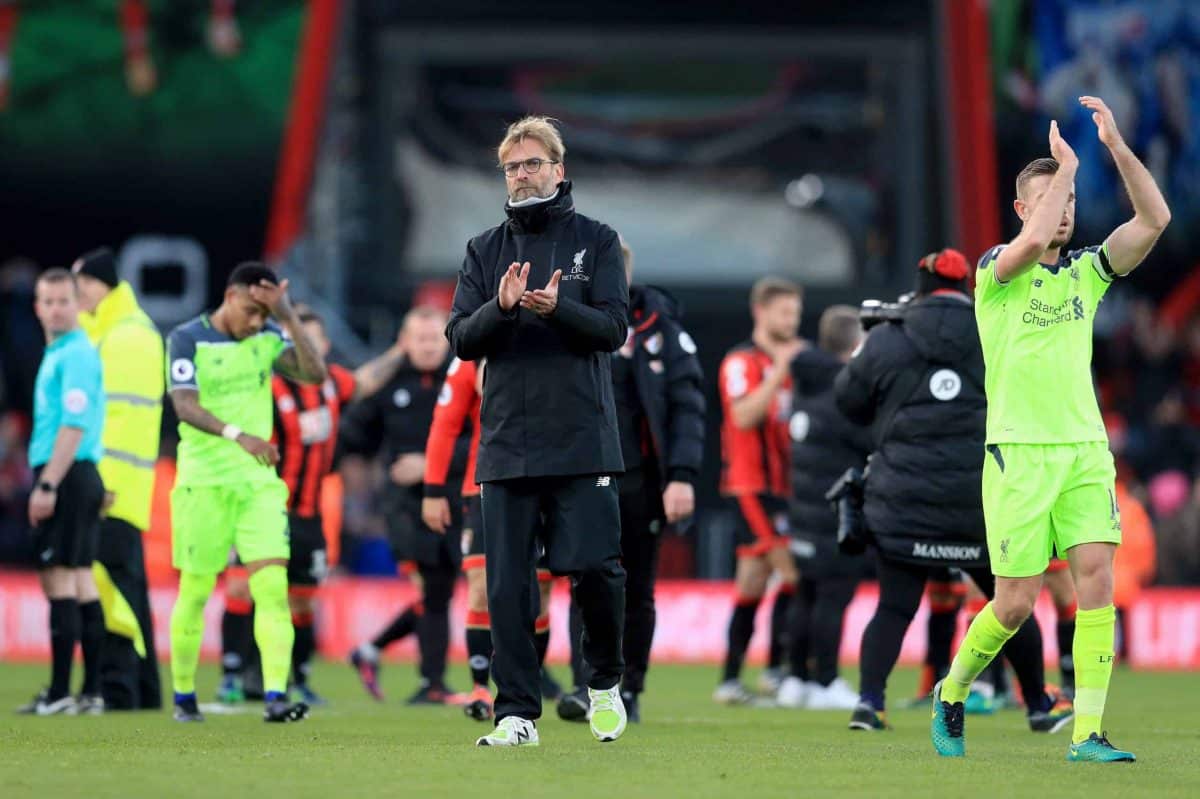 Liverpool boss Jurgen Klopp refused to blow his top at his players after they twice relinquished two-goal leads to lose a seven-goal thriller at Bournemouth.

The Reds seemed to be cruising at half-time courtesy of goals from Sadio Mane and Divock Origi, and were 3-1 up midway through the second half, before three goals in the final 15 minutes saw the hosts run out 4-3 winners.

Klopp, who was admonished by referee Robert Madley in the second half, was barking orders in his usual fashion and also stormed out of his technical area to berate Mane at one point.

But, after his side fell to just a second league defeat of the campaign, he insisted he was satisfied with his players’ effort. “I’m not angry,” he said.

“I was angry during the game a few times, but I saw that my boys didn’t want to do the wrong thing, but they did and lost the momentum in the game, and it’s not simple to come back.

“That’s why you have to keep momentum all the time you can. I cannot change it. So why should I be angry?”

Callum Wilson pulled one back from the spot after substitute Ryan Fraser was brought down, but Emre Can restored the two-goal cushion soon after, only for the impressive Fraser to strike his maiden Premier League goal and then cross for Simon Cook to level with a well-taken effort.

And there was more to come in stoppage time as Chelsea loanee Nathan Ake bundled home a winner for Eddie Howe’s side to prevent Liverpool closing to within a point of Ake’s parent club at the top of the table.

Klopp continued: “The guys just weren’t clear enough in the game. We couldn’t influence the referee’s decision on the penalty. We could have seen a few situations differently, a player could have been sent off for a second yellow card for holding (Roberto) Firmino – but we have to accept that happens.”

Explaining his conversation with the referee and fourth official Stuart Attwell, Klopp added: “I was not happy about the penalty decision.

“It was not possible for me to do absolutely nothing. What I did was obviously too much. So I got a green card, before the yellow card, so I didn’t do it again.

“At first I said it wasn’t a penalty. And then Sadio shot the ball up into the stand, and I tried to tell him to play football again. I left my technical area, that’s all. He (Madley) told me not to do it again.” For Bournemouth, this was a first victory over Liverpool in their history, and took the Cherries into the top half of the standings.

A 3-1 defeat at Arsenal last week meant Howe could not celebrate his 300th game as Bournemouth manager, but his 301st match at the helm is one that will live long in the 39-year-old’s memory.

“I don’t think I’ll ever forget this one,” he said. “It was a real contrast of emotions. Right up there with the Everton game last year where we were really poor for the first part and came back for a point (a 3-3 draw).

“At half-time we were in real trouble. Liverpool were excellent. We weren’t very good. So that makes the comeback all the more impressive.

“After promotion, we never wanted to lose our togetherness, never-say-never attitude and commitment which got us into the Premier League.

“Money can harm that, but this is evidence we’ve maintained that spirit and, if anything, harnessed it. That bodes well.”