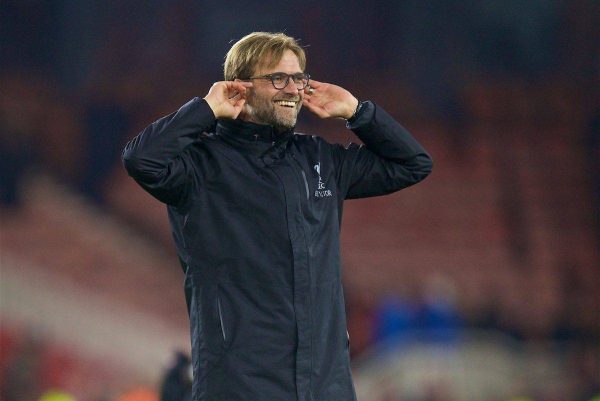 Jurgen Klopp was forced to make some big calls for Liverpool’s clash with Middlesbrough, but a 3-0 win proves they all paid off.

What makes a good leader? There are many qualities that separate the truly exceptional from the mediocre. The obvious go-tos are vision, credibility, passion and the ability to inspire; the latter is sometimes called charisma.

Bill Shankly, one of the great leaders in the club’s history, was fairly emphatic on the subject. “If a man can’t make decisions, he’s a bloody menace,” he said.

Klopp was faced with a mountain of decisions prior to the game at the Riverside and he got every one of them right. The pre-match focus was of course on Liverpool’s goalkeeper: Loris Karius has shouldered the responsibility for much of the Reds’ defensive woes, and his manager had launched a staunch defence of the young stopper in the aftermath of the disappointing draw against West Ham at the weekend.

The manager is right to point out that a defence consists of five players, not one. He’s also correct to argue that defending is the responsibility of the whole team when they don’t have the ball. However, since when has being right in principle mattered in the pressure cooker of Premier League football?

Loris Karius is only 23. He’s adapting to a new league and every mistake he has made has be analysed to the nth degree. His qualities have been dissected on social media and a gaggle of ex-players have wasted no time in wading into the debate. Such was the backdrop to Jurgen’s team selection quandaries.

The choice might appear simple. Stick or twist? However, appearances can be deceptive. Dropping the ‘keeper, no matter how much it is sugarcoated as a protective measure, is likely to knock the player’s confidence. A look at Karius’ face on the bench tells its own story and the lad is clearly devastated. However, if he had played and made another error the damage could have been more serious for both the player and the Reds’ aspirations.

Managers are paid to make these decisions and the best don’t shirk that responsibility. Klopp is one of the best. The young German’s replacement, Simon Mignolet, had a superb game and made a series of confident saves at crucial times. If Karius is looking for solace after his omission, he would do well to look at his competitor for the No. 1 spot for inspiration.

It wasn’t so long ago that Mignolet himself was regarded as a liability. At the Riverside he looked like he had benefited greatly from his manager’s decisiveness in taking him out of the firing line. He’s clearly not been happy about it, but he has worked hard, kept a good attitude and waited patiently for his chance. Now he has to do everything in his power not to squander it.

There is a route back into this side for Karius and the Belgian keeper has lit the way. It is now the young German’s turn to be patient and work hard. His chance will come again.

Klopp has handled the situation perfectly. He’s shown he has his players’ backs, rounding on their critics, and he now has two quality ‘keepers fighting hard for the shirt.

However, this wasn’t the only decision the manager had to make: the mystery injury suffered by Joel Matip meant many of us went into the game fearing the worst. He could have kept faith with Lucas Leiva at centre-back—the Brazilian hasn’t done a bad job there—but it’s not his natural position. Enter Ragnar Klavan, who must have wondered at times what he had done to upset the manager.

It says a lot about the player and the spirit in the dressing room that Klavan has also kept his chin up, putting in a sterling performance against Middlesborough.

Fortunately for Klopp it gets a lot easier making decisions in attack. Here the managers choices are limited, as evidenced by his youthful bench. Reinforcements are still needed but his first choices in attack against ‘Borough didn’t put a foot wrong.

Adam Lallana, another player who is the living embodiment of the efficacy of his manager’s judgement, was peerless. He scored two, had a crucial hand in a third and even managed a key block in the first half.

The days when he struggled to see out a game have gone and now he only leaves the pitch early to soak up the adulation of the supporters. His was a man-of-the-match performance, by a country mile.

Now we come to Divock Origi, another player who has had to be patient and bide his time—and oh, how it has paid off for him. Liverpool clearly miss the creativity of Philippe Coutinho; any team would. However, in Origi they have pace, power and goals and he has repaid his manager’s faith in him with five goals in five games.

The scary thing for our opponents is that the lad has nowhere near peaked yet. Supporters everywhere will have held their breath as he left the field late on, nursing an apparent injury.

This was an immensely important win for the Reds, especially when you factor in Arsenal dropping points to Everton the night before. Failure to capitalise would have been a setback, especially in light of wins for Chelsea, City and Spurs.

It is also huge from a psychological perspective, coming less than a week from the Merseyside derby.

Liverpool have shown that they can whether a storm of criticism. Their manager has shown that, with the spotlight cranked up to the max, he can get the biggest decisions right. And the men who wear the shirt showed us all that they can put the setbacks behind them, learn from their mistakes and get right back on track.

There is, of course, one other important take-home from this result: the Reds were up against perhaps the stingiest defence they will face all season. This was not a bus, it was a great wall.

They had been frustrated in the first half, as the home defence held sway. Boro could even have been level, but for Mignolet. However, in the second half Liverpool blew Aitor Karanka’s side apart. They were simply breathtaking at times.

Liverpool are back in second place and they thoroughly deserve to be there. After the nightmare of Bournemouth and the frustration of West Ham, the supporters and the manager have rightly demanded a response. At Riverside they delivered, and some.

As we approach the halfway point in the season believe me when I say Liverpool are right in this title race. Same again next week, Reds.