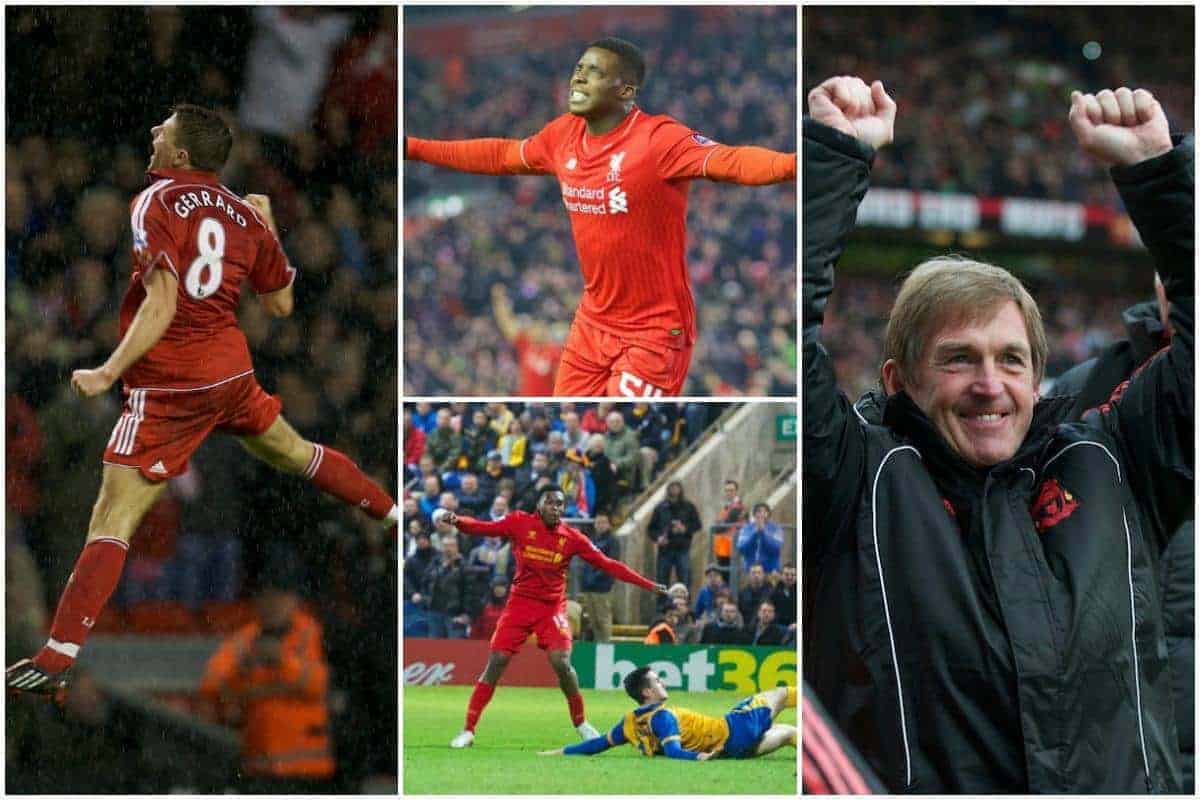 Liverpool take on Plymouth Argyle in the FA Cup third round on Sunday, as the Reds look to lift the world-famous trophy for the first time since 2006.

The Pilgrims visit Anfield this weekend aiming to spring a shock of huge proportions, with 68 places between them and Liverpool.

Jurgen Klopp is searching for his first trophy with the Reds, and although a weakened team is expected, it is a competition he will be taking seriously this season.

The FA Cup third round always has a certain magic to it, even if its importance has dwindled in recent times, and Liverpool have experienced some highs and lows in it during the past decade.

Here is a look that three that left us beaming, and three that caused us misery.

Klopp got his first taste of FA Cup action away to Exeter City last January, and was given a real scare by the Grecians.

A young Liverpool side was rescued by left-back Brad Smith with 17 minutes remaining, with the 2-2 scoreline taking the tie to a replay. Jerome Sinclair had struck earlier.

Youth was once again the order of the day at Anfield, and the Reds’ youngsters delivered in impressive style, with Sheyi Ojo and Joao Teixeira scoring their first Liverpool goals in a 3-0 win.

West Ham knocked Klopp’s men out in the fourth round, however, with Angelo Ogbonna’s last-gasp header in the replay denying an inexperienced Liverpool the chance to go through on penalties.

They had to settle for final appearances in the League Cup and Europa League instead.

Although this has to be seen as a ‘bad’ day at the office, there was so much positivity on the day, despite Liverpool losing to bitter rivals Man United.

The abysmal reign of Roy Hodgson had come to an end, and amidst much joy, club legend Kenny Dalglish was announced as his replacement.

The ovation King Kenny received from the travelling Reds at Old Trafford was a memorable moment – the entire mood among the supporters had changed.

Being dumped out of the cup by United is never pleasant, but Dalglish’s return helped prevent spirits from being too low.

When Daniel Sturridge signed for Liverpool from Chelsea in January 2013, it was seen as a £12million gamble by Brendan Rodgers.

The striker had flattered to deceive at both Stamford Bridge and Man City, and this was seen as the last throw of the dice in his career, in terms of joining a top club.

When Liverpool visited Mansfield Town in the FA Cup third round, Sturridge showed straight away that he was out to prove a point.

The England international finished clinically just seven minutes into his debut to give the Reds the lead, and Luis Suarez also struck in the second-half.

Still bizarrely divisive, despite being a footballer of magnificent talent, Sturridge has scored 59 goals in 106 appearances for Liverpool to date.

Rafa Benitez endured some miserable FA Cups matches during his time at Anfield, and Reading provided the Spaniard with one of these experiences in 2009/10 – a season that proved to be his last on Merseyside.

A 1-1 draw at the Madejski Stadium took the tie back to Anfield, and a strong-looking Liverpool starting line-up was expected to have enough to progress.

Gylfi Sigurdsson, then a relative unknown, scored a stoppage time penalty to take the game to extra-time, and Shane Long won it for the visitors after 100 minutes.

It was one of those games that left a really bad taste, in what proved to be a shambolic campaign both on and off the pitch.

Liverpool and Luton Town had already conjured up an FA Cup classic in 2006 – the Reds won 5-3 at Kenilworth Road – and they were again drawn against one another two years later.

Benitez’s men were again given a really tough game at Luton’s ground, with John Arne Riise’s own goal – he would score a more high-profile one against Chelsea a few months later – earning the hosts a replay.

The return fixture was all about Gerrard, though, who at this point in time was among the very best players on the planet.

Liverpool’s iconic captain struck a hat-trick on the night, and further efforts from Ryan Babel and Sami Hyypia earned the Reds a 5-0 win. The match was also notable for being Jamie Carragher’s 500th appearance for the Reds.

Having beaten lowly Havant & Waterlooville 5-2 in the fourth round, they were knocked out in humiliating fashion by Barnsley in the fifth round. Brian Howard’s late winner still hurts.

Having beaten West Ham in an epic 2006 final at the Millennium Stadium, Liverpool were looking to defend their crown in 2006/07.

Benitez and his team were immediately given a stern test, however, with Arsenal drawn against them in round three at Anfield.

It proved to be a disappointing evening, as the Gunners strode into town and fully merited their win. Tomas Rosicky scored twice and Thierry Henry outpaced Jamie Carragher to score a brilliant solo effort, as the north Londoners clinched a 3-1 victory.

The match was more notable for ‘The Truth’ protest against The S*n newspaper and Kelvin Mackenzie. ‘The Truth’ mosaic was held and ‘Justice For The 96’ was continually chanted for the opening six minutes of the match.

“I’m not sure what the fans were singing at the start of the game but when it stopped the noise they made meant no-one could hear what was going on on the pitch,” said Thierry Henry after.

Just three days later, Arsenal returned to Anfield in the League Cup and pulled off an astonishing 6-3 win. At least we reached the Champions League final that season.