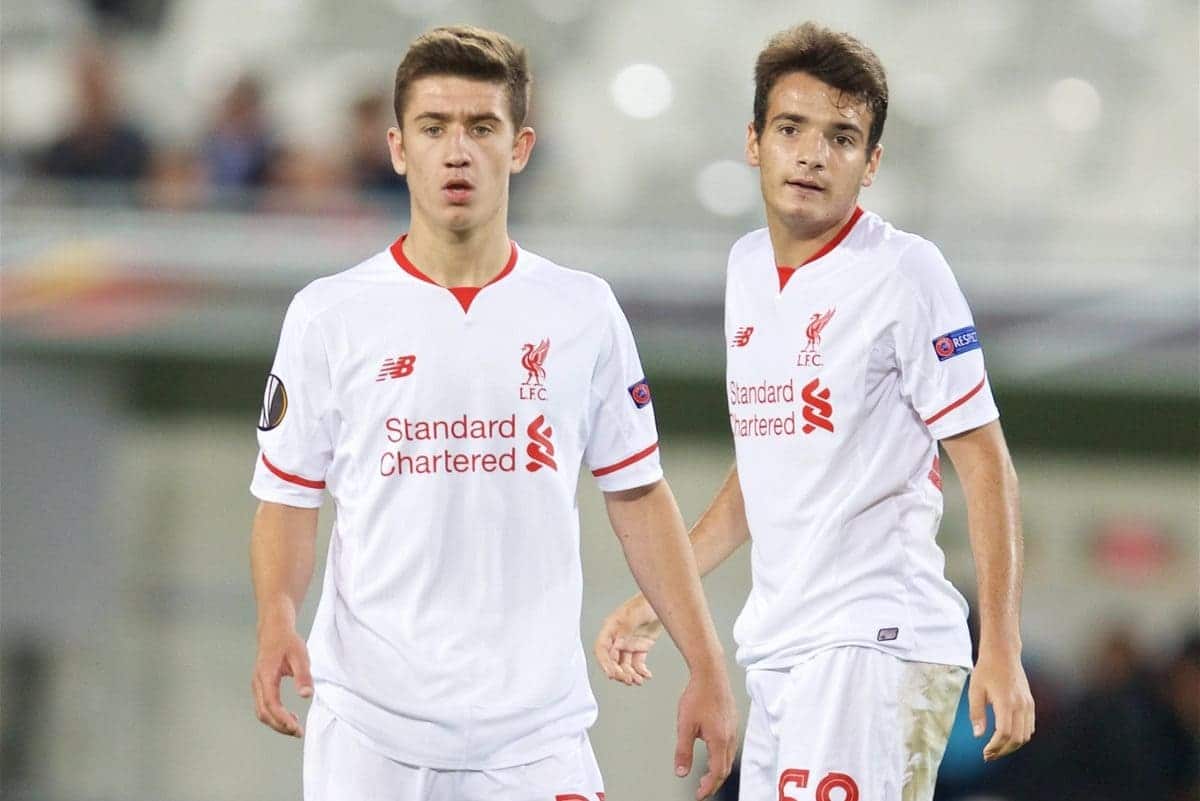 With the winter transfer window now open, we take a look at five Liverpool youngsters who would benefit from making a loan move this January.

Klopp has taken a different approach to the loan system since his appointment at Anfield, initially saying he preferred to keep players at the club, then realising the need for competitive football for youngsters outside of under-23s football.

A total of 12 players have been loaned so far this season – with deals now only allowed to be longer-term and not short-term monthly agreements, so anybody heading out this month will do so for the rest of the season.

With the trio of Trent Alexander-Arnold, Ovie Ejaria and Ben Woodburn getting their education as part of the first-team squad, it’s unlikely they will head out this winter.

However, there are a few Reds who would benefit from temporary moves away in order to continue their footballing development.

Liverpool currently have ten players loaned out – with Jack Dunn and Adam Bogdan (due to injury) having returned from their respective spells.

Pedro Chirivella looks set to complete six-month switch to Dutch outfit Go Ahead Eagles, and here are five more Reds who would benefit from a loan move this month.

The youngster seemed primed for a similar role this campaign – especially when Jon Flanagan joined Burnley on a season-long deal.

But the emergence of Alexander-Arnold as Klopp’s go-to full-back has seen Randall slip down the pecking order, with the 21-year-old uninvolved in first-team duties in 2016/17.

With Anfield’s next crop of talent pushing through, Randall has even seen his action for the under-23s limited, featuring just six times.

He is stagnating on Merseyside currently, and at this stage of his career, regular football is a must with the defender needing further experience on the first-team stage.

This won’t come at Liverpool, but could materialise in the Championship or even a top-end League One side.

Wigan and Preston North End have previously been linked with a move for the former Shrewsbury loanee, and a six-month switch would be welcome. Wigan are struggling in the Championship so a move to Deepdale where Preston are midtable would preferred.

Hopes for 2016/17 were high for Brannagan, following a productive campaign sprinkled with first-team involvement as he made nine appearances.

It was expected that he would feature in Klopp’s squad this season, but the 20-year-old has found himself playing in the Premier League 2 instead.

While crucial for his progression, Brannagan’s quality and aspirations for a long-term Anfield stay means he needs a competitive first-team stage to take his game to the next level.

That Brannagan is currently side-lined for a month with ankle ligament damage – which could see him return at the late stages of the transfer window – could scupper loan plans altogether.

But if he recovers and can make a temporary move, this should be a priority for both club and player.

Brannagan was poised for a loan this month, with League One high-flyers Bolton the possible destination, before injury intervened, and this would be something to resurrect.

A six-month spell would provide a solid platform for him to find regular match action and form. Maguire was one of the numerous academy players Klopp used to negotiate last winter’s injury crisis, featuring against Exeter in the FA Cup.

But the left-back has failed to push on since that solitary taster of first-team action, unable to progress beyond Liverpool’s development sides.

Maguire has featured seven times for the under-23s so far this season, and with the emergence of Spaniard Juanma at left-back he’s not going to get more chances unless he moves to centre-back.

At 21, he needs to begin proving his abilities at a competitive level in a first-team environment.

He failed to do so in a brief spell at Leyton Orient in 2015, but the left-back now needs to start progressing away from Anfield to have any chance of proving he can have a long-term Reds future.

Like fellow young full-back, Sam Hart, who is on loan at Port Vale, a move to League One would be a positive step, and one Maguire would benefit from. Despite an impressive start, including a hat-trick in the League Cup, the move didn’t go to plan, with Dunn making a premature return to Anfield in mid-November.

The striker appeared set to feature in the under-23 squad, but he hasn’t played a single minute of competitive action since returning.

At 22, and having failed to break into the first-team, Dunn needs to kick-start his career with a consistent spell in the Football League to prove his capabilities.

Dunn’s talent was evident in flashes at Morecambe – he scored six goals in 19 games – and there’s no reason why he can’t showcase this on a more regular basis at a more suited club.

This should come at a higher level however, and finding a League One team seems a logical move. It briefly appeared that Brewitt was set to leave Liverpool once and for all last summer, when he was accidentally named on the club’s released list.

The young centre-back remains on Anfield’s books however, but January could provide the perfect time for Brewitt to make a first temporary move of his career.

The 19-year-old has played only two competitive games for the under-23s this season, and his prospects for further match action are unlikely to improve with Tiago Ilori and Mamadou Sakho occupying the central roles.

This provides a good time for Brewitt to begin taking steps into first-team football, and onto the competitive stage to learn and develop under the pressure the Football League brings.

Brewitt spent time on trial at Chesterfield back in October – where goalkeeper Ryan Fulton is plying his trade – suggesting both club and the teenager are open to the idea of a loan move.

It would certainly be a wise decision for all parties, and a League One club like the Spireites would be as good a place to start as any.