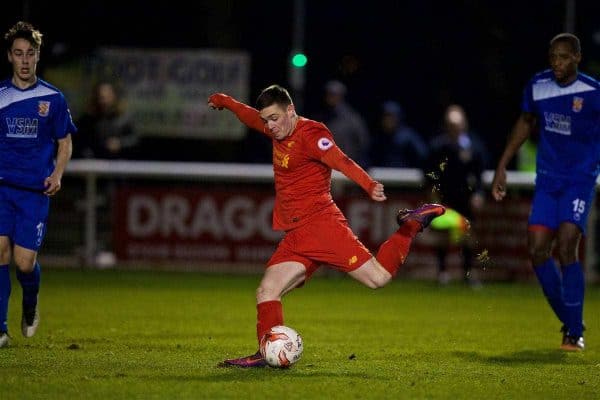 A Jack Dunn hat-trick contributed to Liverpool U23’s 6-0 win against Bangor City, as the Reds took a look at a possible new signing.

Dunn entered the game midway through the second half and scored his hat-trick in under 15 minutes.

The 22-year-old attacker has recently returned from a loan spell at Morecambe, and made an instant impact on his comeback for Liverpool’s reserve side.

The Reds led 2-0 at half time thanks to goals from captain Harry Wilson and striker Toni Gomes, playing in front of 2,000 fans in this friendly at the Bangor University Stadium.

Sheji Ojo started for the young Reds, with Jordan Williams perhaps the only other recognisable name in terms of first team experience.

The game was also notable for the inclusion of trialist Cian Harries, a 19-year-old left sided defender who is currently on the books at Coventry City.

The side will be looking at centre-back options at youth level with Mamadou Sakho, Joe Gomez, and Tiago Ilori likely to want first team football, whether at Liverpool or elsewhere.

Ojo was replaced by Madger Gomes at half time prompting rumours that he could be in line for a game with the first team against Plymouth on Sunday.

Welsh native Wilson added another goal in the second half, scoring from the rebound after having a penalty kick saved.

It was another impressive display from the 19-year-old who must surely be due an appearance on the bench for the first team sometime soon.

Dunn was the late star, though, and his goals pleased U23s coach Mike Garrity who also had positive things to say about Ojo.

“I was delighted for Jack to get his hat-trick and that will give him a lot of confidence,” Garrity told the official site.

“Sheyi did well in his 45 minute outing and is getting sharper with each game he plays. Overall we were pleased with the lads’ attitude and their work ethic was fantastic.”

The U23s next game will be a friendly against Barnet on Tuesday the 10th of January, before they face Manchester United U23s at Anfield on Monday the 16th of January at 7pm.