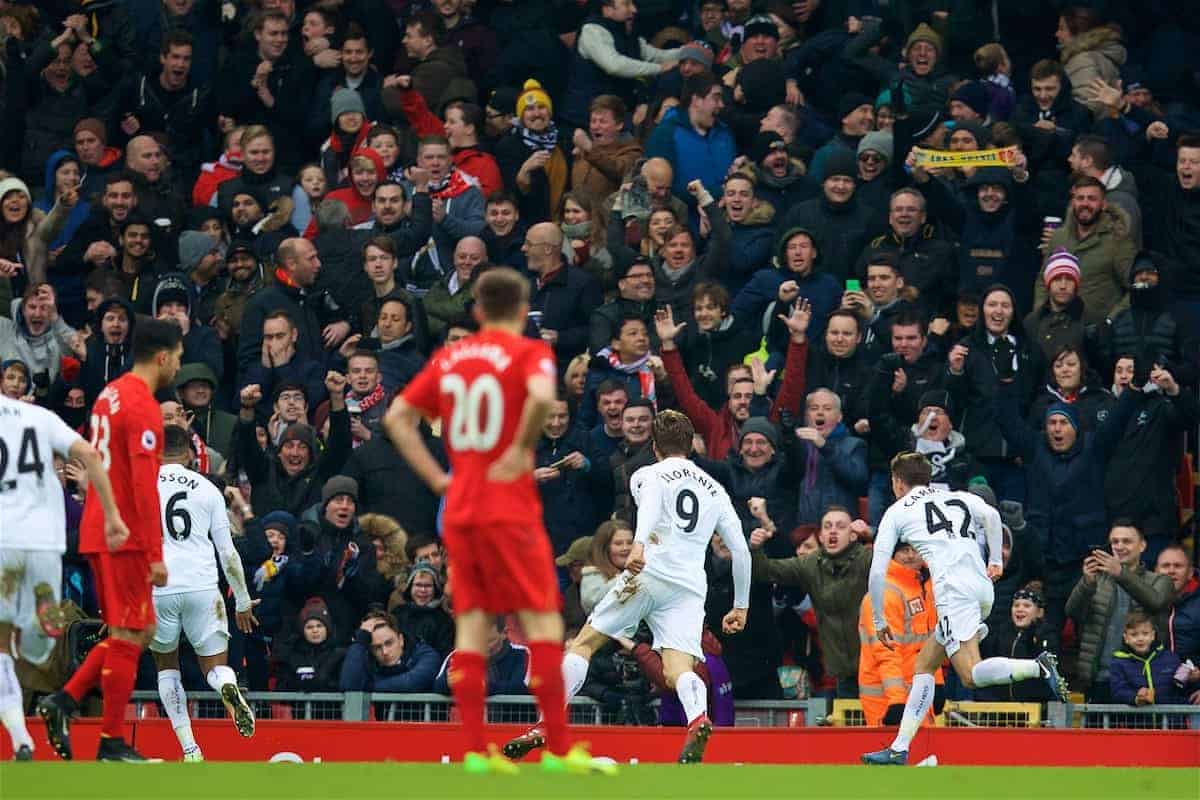 The media were critical of Liverpool’s defending and were disappointed by the Reds’ continued struggles in attack without Sadio Mane in the damaging 3-2 loss against Swansea.

Liverpool’s title dreams suffered a huge blow following a costly first home defeat for over a year to the relegation-threatened Swans.

Fernando Llorente’s double gave the visitors a commanding lead but Roberto Firmino’s brace brought Liverpool back level all in the space of 25 second-half minutes, before Gylfi Sigurdsson snatched all three points for Paul Clement’s men.

The Reds paid the price for some desperately poor defending, but Klopp will also be angered by his team’s overall performance with Liverpool failing to play with the required intensity for large parts.

It was a must-win game for the Reds in order to stay within touching distance of leaders, Chelsea, but Klopp’s men now find their dreams of title glory all but over.

Here’s how the media assessed a costly afternoon at Anfield.

Reporters discussed a terrible result for Liverpool’s title aspirations, with journalists offering mixed views on the Reds’ ambitions for the rest of the season.

Writing for JOE.co.uk, Tony Barrett thinks anything other than victory over Chelsea will see Liverpool fighting for top four rather than the title:

Anything other than a victory in their next home game against Chelsea and Liverpool will spend the rest of this season looking to hold onto their place in the top four rather than harbouring realistic prospects of finishing top of the pile.

This was another crazy game when Liverpool’s talent for shooting themselves in the foot shone brightly. A top-four place is their ambition now.

The Telegraph’s Chris Bascombe was among those to note Liverpool’s infuriating complacency against the ‘lesser’ sides which has ultimately derailed the title charge:

Take a look at the calibre of teams they have dropped points against.

Burnley, Bournemouth, Sunderland, West Ham and now Swansea. Liverpool have been good enough against the ¬title challengers, but found wanting against those whose ambitions are staying in the division.

As expected, the Reds’ defence came in for criticism in post-match reports, with journalists unimpressed by the collective and individual displays.

Summing it up nicely, Liverpool’s backline was likened to a “a help yourself buffet” by Mirror Sport:

But crucially for Liverpool’s ambitions of winning their first title since 1990 the present day defence resembles a help yourself buffet.

Liverpool just don’t have the concentration required at the top level.

The defence literally had nothing to do first half, and yet within seven minutes of the break found themselves two down from Swansea’s first two attacks.

Kelly was critical of Klavan’s performance in particular:

Poor all day, his indecisive clearance inadvertently provided Swansea’s winner. Booked in the first half and a shade fortunate not to get a second yellow after another obstruction. Joel Matip has few fears about regaining his place.

However, Maddock sympathised with Klopp for being without Joel Matip due to FIFA’s ineptitude:

They can feel well and truly let down by FIFA though.

It is ridiculous they have been without Joel Matip for the last three games while the governing body came a decision over his international status.

This Is Anfield’s James Nalton feels Matip must return to the team instantly, and Klopp should consider partnering him with Joe Gomez:

Jurgen Klopp must surely reinstate him in defence for the games against Southampton and Chelsea, and he just has to decide who from Lovren and Klavan will partner him—but on today’s showing, he might go with Joe Gomez.

The watching journalists also assessed how Liverpool paid the price for failing to make their dominance count, bemoaning the Reds’ lack of speed in possession and creativity from midfield. The Liverpool Echo’s James Pearce believes the Reds have lost their attacking swagger and fear factor:

The reality is that Liverpool have lost the swagger which demolished opponents back in the autumn. They look jaded. The fear factor is no longer there.

Maddock was among those critical of the Reds’ slowness on the ball:

They also lacked the energy and urgency that has been their trademark this season, especially in their passing.

Meanwhile, Bascombe felt complacency was prevalent on and off the pitch at Anfield:

Until then Liverpool were playing what could best be described as presumptuous football in a lethargic stadium.

Klopp’s players dominated the ball, and occasionally created chances, but there was an air of expectation utterly ill-suited to Liverpool’s position – as if it was a case of waiting for the inevitable victory rather than putting in the necessary application to make it happen.

And while Firmino scored his first goals in six games – the first a header from Milner’s cross, the second a fierce finish after he had chested down Georginio Wijnaldum‘s delivery – a total of five shots on target and an Adam Lallana deflected effort against the bar is scant product from nearly 75% possession. Maddock felt Klopp made an error by not playing Adama Lallana in midfield, where his creativity can prove key:

Jurgen Klopp may have made a mistake with his midfield. He took Lallana out to play him further forward, but that made the Reds too safe against opponents who swamped that area.

There has to be more creativity – and more risks taken – deeper, to unlock sides who defend so deep.

Meanwhile, Kelly felt Klopp shouldn’t have selected both Emre Can and Georginio Wijnaldum:

His [Klopp’s] persistence in selecting both Georginio Wijnaldum and Emre Can caused problems but, with Sadio Mane unavailable, the manager seems to have few answers.

And discussing Liverpool’s struggles in attack, numerous journalists attributed this to the absence of key man, Sadio Mane. Despite having Philippe Coutinho back in the side – and ending the game with Divock Origi and Daniel Sturridge on the pitch – the Reds were short of attacking invention and strength in the absence of Sadio Mane, who is at the Africa Cup of Nations with Senegal.

Liverpool have badly missed the pace and threat offered by Mane since he last played for them on Jan. 2 at Sunderland. Never was that more evident than against an entrenched Swansea side on Saturday afternoon.

Mane can effortlessly glide past opponents and, even when not at his best, requires close attention from defenders due his movement and speed. Without him, Liverpool simply do not have anyone that can fill the void.

Barrett is unimpressed with how Liverpool have failed to prepare for Mane’s absence:

But while Liverpool deserve some sympathy for the Matip farce, they have had six months to find a way of dealing with Mane’s inevitable call up for Senegal and they are yet to find one. Given the winger is the main provider of Liverpool’s attacking pace and the one who creates most space for others, it was wholly predictable that they would lose rhythm without him.

Numerous reporters felt the defeat once again highlighted Liverpool’s lack of squad depth and noted how it has severely hindered the Reds at a crucial time. It is here that their lack of squad depth is being exposed in a way that their critics always predicted it would.

But as soon as there is any wear and tear they can struggle to cope with the demands needed to win the league, rather than just light it up when all is going well.

Bascombe believes Liverpool are too reliant on their starting XI:

It is starting to look suspiciously that if Klopp’s first choice eleven is not on the pitch, they cannot function at the required level to compete for the title.

The fact is that Klopp’s squad is at least one wide attacker short and Liverpool would have benefited from an injection of quality at the turn of the year.

Without Mane, the balance of the team just isn’t the same. Klopp doesn’t have anyone else capable of filling that void.

Though it’s difficult to sign top players in January, Liverpool look in need of an extra squad member or two to add pace up front or guile in midfield, and maybe even an upgrade alongside Matip in the back four.