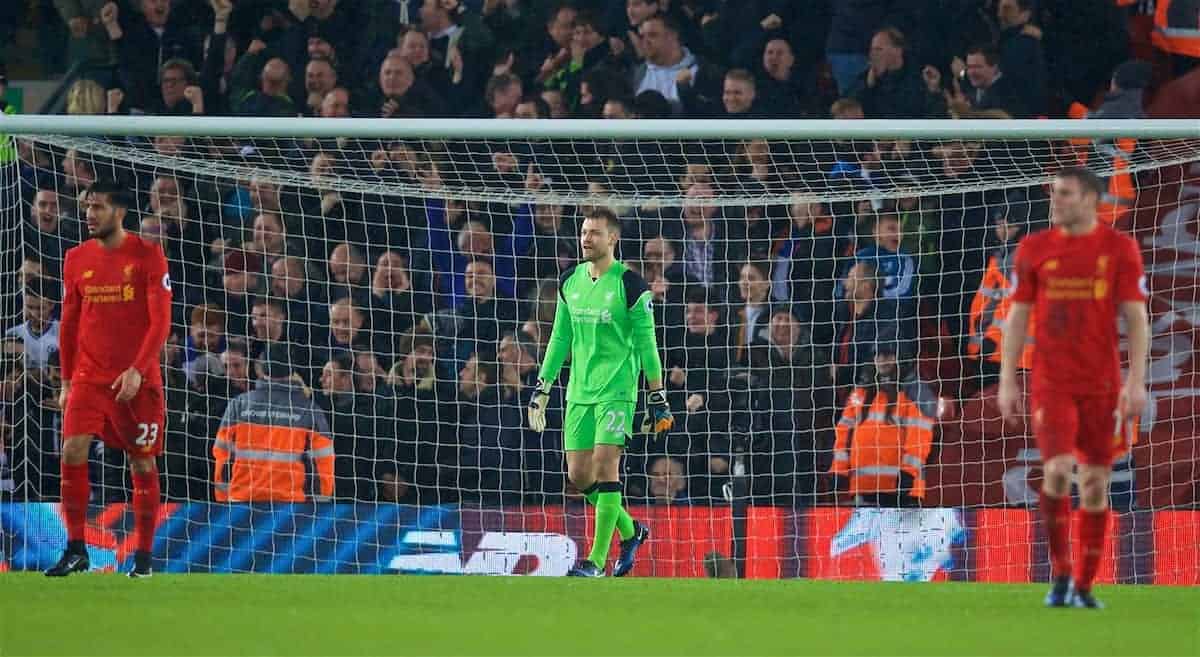 Liverpool goalkeeper Simon Mignolet and goalscorer Georginio Wijnaldum both showed their disappointment to only come away with a point against Premier League leaders Chelsea.

Chelsea‘s David Luiz scored a fantastic free-kick to give the visitors a half-time lead, with Wijnaldum heading in an equaliser just before the hour mark.

The drama did not stop there as Diego Costa earned his side a penalty when he was tripped by Joel Matip in the area, but the Spain international saw his spot-kick thwarted by Mignolet as the Blues maintained their nine-point advantage at the top of the Premier League.

But despite the heroics of the Belgian, both Mignolet and Wijnaldum believed that the hosts should have sealed the three points against their title rivals.

Wijnaldum told BT Sport: “I’m happy how we came back in the game—it is always a difficult match against Chelsea.

“I thought we started the game very well and played good football in their half and the biggest chance was the free-kick.

“I think we were disappointed and didn’t do things that we did before like pressing, and then we scored the goal.

“It is a good point but I am disappointed and my team-mates also because we could have had more. But I think 1-1 is a good result.” Mignolet added: “Straight after the game, the feeling is that we are disappointed.

“And if you do that against Chelsea, who are leading the Premier League, getting a lot of points and playing good football, then it shows how hungry we are and I think we deserved the three points.

“We can focus on the Premier League. We have big challenges coming up but if we play like we did today then definitely pick up more points and we would like to do that.

“I think we showed that we are a very good side and set this as a benchmark.”

On Luiz’s free-kick, he said: “I didn’t hear the whistle, then he hit it earlier.

“It was a good free-kick in the end but obviously you have to give yourself a chance to save it but that didn’t happen.”