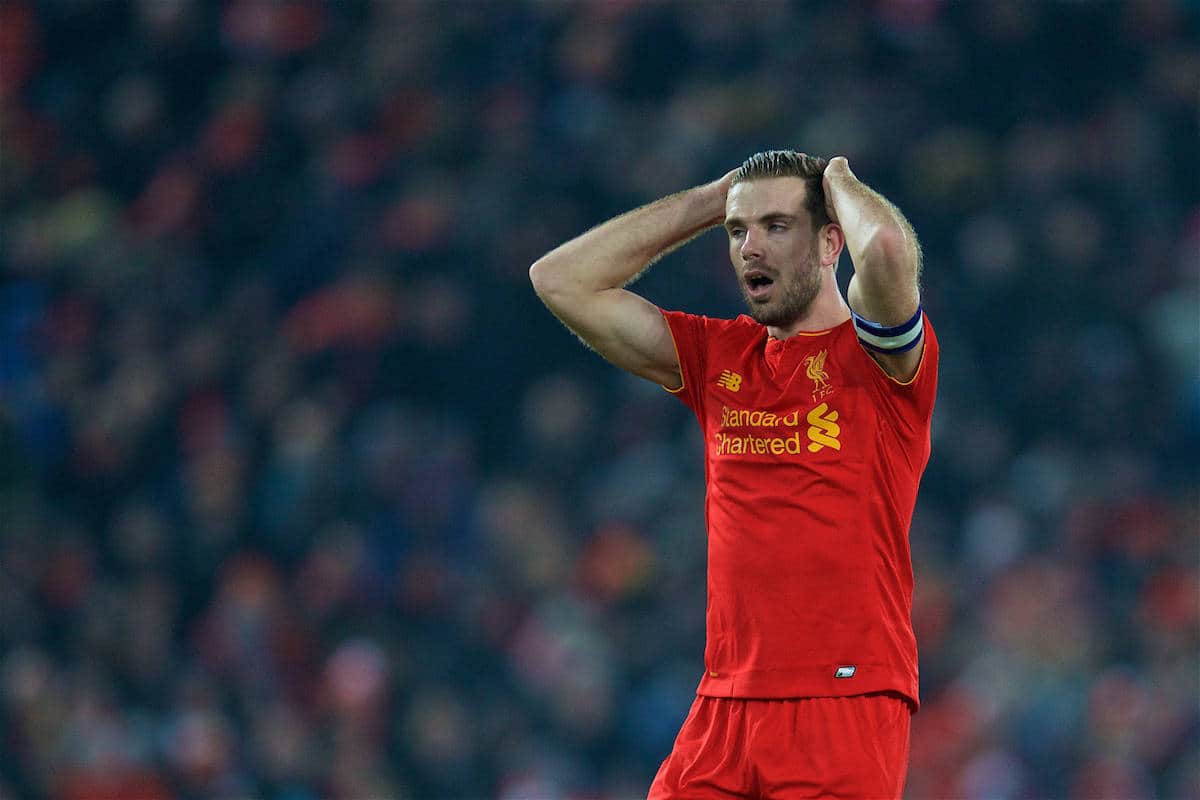 Another insipid showing from Liverpool saw Jurgen Klopp‘s side fall to a 1-0 defeat to Southampton and out of the League Cup on Wednesday night.

Having held crisis talks with his side in a bid to resurrect their form, Jurgen Klopp led the Reds back to Anfield to take on Claude Puel’s Saints as they pushed for a place in the League Cup final.

A 1-0 victory in the first leg at St Mary’s gave Southampton the advantage as they took to Merseyside, and they will have been buoyed by Liverpool’s miserable 3-2 loss at home to Swansea City on Saturday afternoon.

The Reds’ only victory of 2017 heading into Wednesday night’s semi-final came away to Plymouth Argyle in their FA Cup third-round replay, highlighting their struggle for consistency.

But fuelled by some German inspiration, Liverpool welcomed Southampton back to Merseyside, with Klopp fielding a strong starting lineup, but it was more of the same from the Reds. Looking to avoid Southampton setting in with a deep defensive line at Anfield, Liverpool looked to go direct early on, moving the ball forward quickly in an effort to exploit gaps at the back.

The Reds began to find rhythm in the final third after the 15-minute mark, and Daniel Sturridge wriggled free and sent a low shot towards Fraster Forster’s goal, but his England team-mate was able to collect.

Southampton began to take their chances on the break, with the pace of Nathan Redmond exploiting Trent Alexander-Arnold‘s adventurous positioning, but Loris Karius was on hand to make a great save to deny Dusan Tadic.

With the Saints’ defence settling in and inexperienced centre-back Jack Stephens finding his feet, Liverpool struggled to craft meaningful opportunities in the final third.

Martin Atkinson blew for half-time with the home side having barely tested Forster, with Puel the happier of the two managers at the break.

Klopp kept faith in his starting lineup at half-time, making no changes, while injury to Jay Rodriguez prompted a change of emphasis in the Southampton attack, with Shane Long taking his place.

Liverpool were shaky from kickoff, with poor touches and misplaced passes hampering their momentum, but Emre Can almost found a leveller with a powerful long-range strike, but despite Forster spilling, he was able to claw it off the line.

Beginning to enjoy more space in the final third as they opted to go wide whenever possible, the Reds began to create, but Sturridge and Philippe Coutinho both missed opportunities.

With the tie growing fraught and Liverpool not looking like securing the vital goal, Klopp sent on Divock Origi, with the Belgian taking Can’s place and joining Sturridge and Roberto Firmino in attack.

Origi had a late penalty call waved away by Atkinson, before Southampton broke and Long was able to convert following scintillating move, with Liverpool suffering yet another frustrating loss.