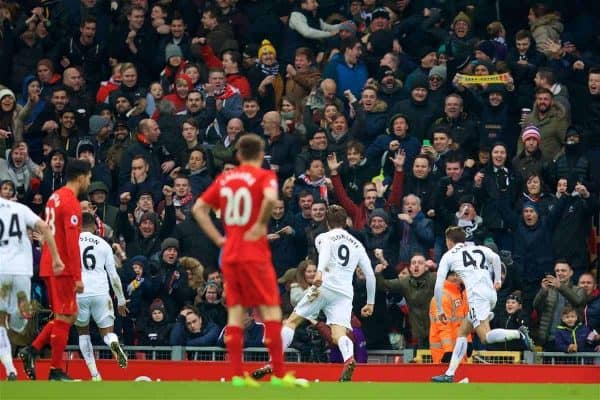 Liverpool were dealt a major blow in their title chase after they suffered a hugely disappointing 3-2 defeat against Swansea in Saturday’s early kick-off at Anfield.

Joel Matip was given clearance to take part by FIFA so he was named in the squad for the first time since December 11 while Philippe Coutinho started his first game since November 26th.

Jordan Henderson made his 50th Premier League appearance as Liverpool captain while Dejan Lovren featured in his 100th league game.

There wasn’t too much too get excited about in the first half as Liverpool dominated possession but were unable to breakdown Swansea’s defence.

However, the second-half started with a bang as Fernando Llorente poked home Swansea’s opener within moments of the restart before doubling the lead with a powerful header just minutes later.

Liverpool responded though and Roberto Firmino scored with a header in the 55th minute before Daniel Sturridge came on to replace Coutinho.

The hosts pressed for an equaliser and it was Firmino who came up with the goods once again with a sensational half-volley.

However, Swansea scored the winner and Liverpool had to settle for a hugely disappointing 3-2 defeat.

Here’s how fans saw the game on social media.

Fans were delighted to see Coutinho and Matip involved…

Perfect team selection apart from Matip not starting, although I can understand why… Come on you Redmen!!!! #LFC

Matip is on the bench! Come on lads! #LFC #YNWA

I think a goal will come eventually but without a Mane type to take on and beat someone to create space we struggle.

We need another pacey attacker, Mane is litterally the only fast player we have

Yikes. Going to be a loooong second half now.

The mistake magnet's at it again

Awful defending from the corner, but what was Lovren thinking in unnecessarily conceding such a cheap corner? Brainless panicking

Swansea regained the lead though and fans were frustrated once again…

Never winning the league with this defence, you just can't keep gifting goals. It's embarrassing.

Worked so hard to get ourselves back in the game and sloppy defending sets us back again.

Our best defender is a midfielder.

Something of a reality check. Getting in the top four this season would be huge for #LFC and there's a long way to go. Need to regroup now.

done trying to find reasons to justify our defence. It's absolutely shambolic. No defending any of that back today all woeful. Feel for migs

Nightmare of a game and performance for so many different reasons. System we started not working against teams visiting Anfield.

Fans should take some blame today. Silent all of the first half, didn't get behind the team until we scored.

I love Klopp and think he is a genius but even he can only take this group of players so far. Bit I don't get is the reluctance to buy #LFC

I guess it was just one of those games… Need to make sure we thrash Chelsea to make up for it… ? #LFC #YNWA

Do we need a signing or two? I think we do.
Will we make any? I doubt it.
Big summer ahead if we are to take the next step

#LFC haven't won a Premier League game since Mane went on international duty. That saying we should beat a team bottom of the league.

Our disastrous start to 2017 continues