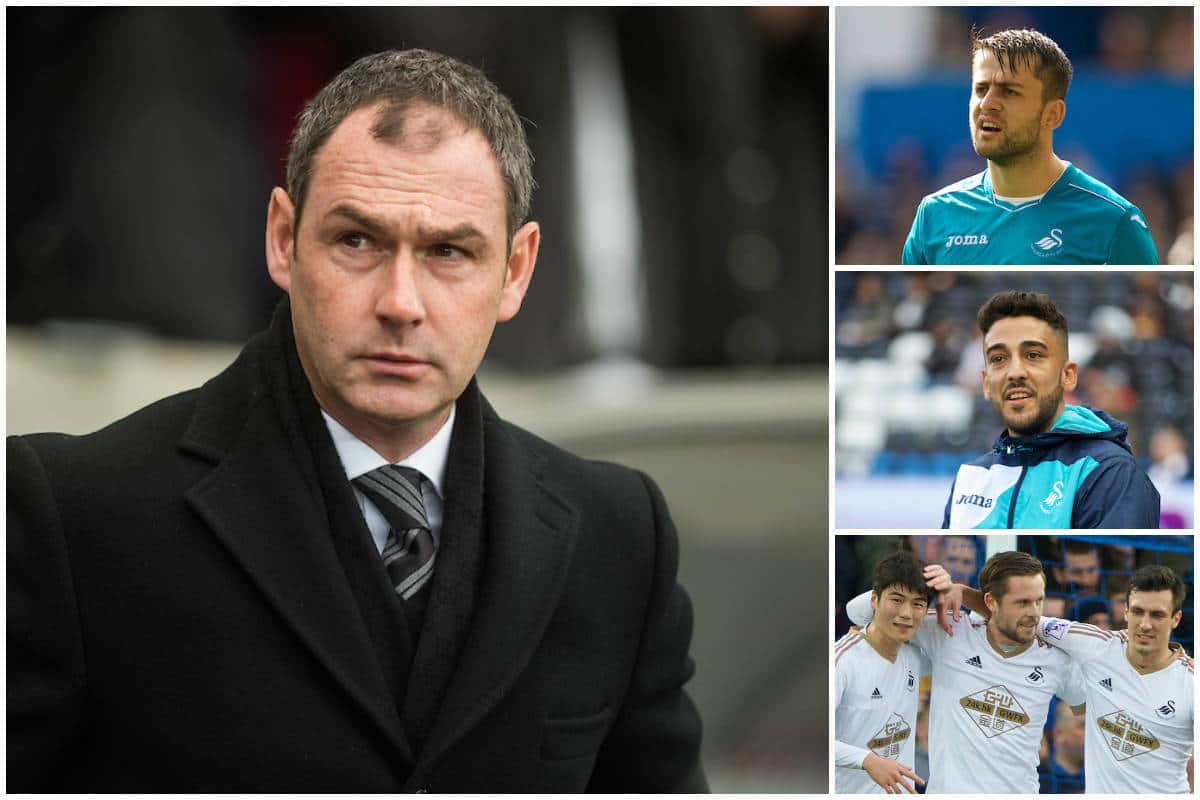 Liverpool host bottom club Swansea City on Saturday, and here’s everything you need to know about the struggling Swans ahead of their trip to Anfield.

Well, that’s the question. How will Swansea play? They are on their third manager of the season—Francesco Guidolin left earlier this term, Bob Bradley lasted about a day and a half—in Paul Clement and so far there hasn’t been much opportunity for him to showcase how he’ll change things around.

His first full game in charge saw the Swans hammered by Arsenal (he was on the sidelines for the win over Palace, but only in the second half) and the team still looked short of real quality.

That said, three additions in the January transfer window could feasibly change everything: formation, speed of play in attack and effectiveness in the final third, particularly if Luciano Narsingh hits the ground running.

In principle they’ll be 4-2-3-1 or 4-3-3, with a lone runner in attack and looking to build by playing wide as quickly as possible. Aerial prowess continues to be a thorn in Liverpool’s side, particularly in the absence of Joel Matip, so both Borja Baston and Fernando Llorente could be a handful if Swansea are allowed to send over crosses and set pieces—though only one of them is likely to be on the pitch at any one time.

The real gem of Swansea’s side, of course, is Gylfi Sigurdsson, and both from set pieces and in striking from range he can be a difficult opponent to stop.

They are still a methodical side in their buildup, not relying on the counter-attack to create and score goals, so organisation after transitions is all-important for the Reds.

As a side note, young forward Oliver McBurnie has been scoring at youth level recently and could be given a chance to impress, perhaps off the bench.

Swansea concede the fourth-highest shots per game in the Premier League and have conceded 49 goals, far and away the worst defensive record thus far at an average of 2.3 per match.

That is all kinds of ridiculous, and is the first port of call for Clement to sort out if avoiding relegation is on the cards.

Where do they concede from? There is, for starters, a disproportionately high volume of goals scored against Swansea from inside the six-yard box: knock-downs not reacted to by white shirts, the goalkeeper parrying the ball out or crosses which are met by onrushing attackers running between static defenders.

Be alert, be on the move, and especially against a team without confidence or self-belief and it’s a natural consequence that goals can follow.

Elsewhere, Swansea have been cut wide open with passes from deep with their high defensive line and a pacy striker in behind—not an issue if Divock Origi starts, but perhaps less likely for the Reds to exploit via Roberto Firmino. Sigurdsson is the obvious reference point for Swansea, and he could play as a false nine—as he has been doing under the previous bosses—or back in his roving midfield role. He’s the one most likely to make things happen for the away side, and shutting him down is imperative.

For Liverpool, it’s fantastic to be able to cite Philippe Coutinho as the main man.

His return from injury is well-timed with a semi-final second leg and a big game against the league leaders on the horizon, so let’s look for him to showcase what the Reds have missed with a virtuoso display of creativity and attacking intent. New boy Narsingh is a doubt with a calf strain, while Neil Taylor and Mo Barrow are out injured. Marvin Emnes has been recalled off loan and new signings Tom Carroll and Martin Olsson are in the squad.