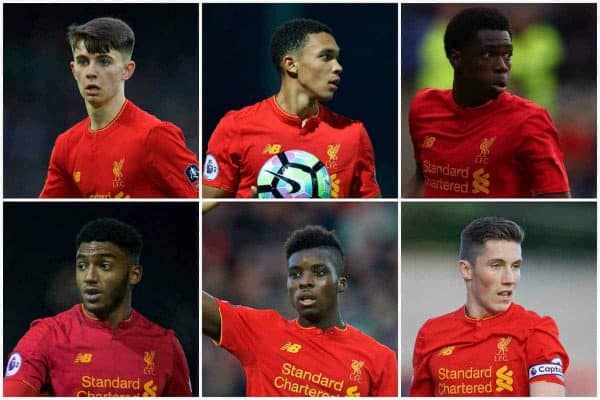 Ovie Ejaria and Trent Alexander-Arnold were the standouts as Liverpool scraped through to the next round of the FA Cup with a 1-0 win over League Two Plymouth Argyle.

He was eager to come off his line and deal with things, clearing a ball into touch within the first few minutes and regularly coming to claim crosses.

Made a good save from a Graham Carey shot from distance, and had another similar save to make at the start of the second half.

Could regularly be seen receiving the ball outside his area as he helped the defenders keep possession.

Trent Alexander-Arnold – 7.5 (Man of the Match)

Made a good intervention late in the first half, covering across after Lucas had been beaten and a cross in had evaded Gomez. He got to the ball before Paul Garita at the far post.

Went on to make numerous similar interventions throughout the game, covering behind Gomez and Lucas.

The team was made up of a mixture of youth players and first-teamers, and Alexander-Arnold looked like one of the latter.

Involved in a physical battle with Garita which was a good test for the young defender.

He more than held his own against the Cameroonian striker in terms of strength, but was occasionally caught out when the ball was crossed.

Looked good in possession, and could be a good alternative to Joel Matip in the right centre-back slot.

Made an important clearing header late in the game when Plymouth were gaining momentum.

Scored his seventh goal for the club, and his first since September 2010 to give Liverpool an early lead and ease the nerves. It was a good, well-directed header, scored after he found himself unmarked at a Coutinho corner.

He was back making an important block in defence shortly after, but though he was comfortable when defending from deep, he was troubled when the opposition ran at him further up the pitch.

Despite occasional troubles in defence the team managed to keep a clean sheet, it was his header which sees Liverpool through to the next round of the cup which is what matters in the end.

Good post match interview too. When he was told that it was 7 years since his last goal he commented that he scored last week in training.

Plenty of opportunities to cross from the left, linking up well with Coutinho, and though these balls in were almost dangerous, they weren’t quite on the money.

Was a good outlet down the his side of the pitch, and won a penalty later in the game with a burst into the area, bravely challenging for the ball.

Struggled to settle into the game, and couldn’t get into the passing rhythm needed from the deep lying midfielder.

Had a good chance to play Sturridge in on goal in the first half but his pass was far too strong.

Beaten to the first header which almost led to a Plymouth equaliser with 15-minutes to go.

Looked more comfortable in the centre of the park than Stewart, and kept things ticking over when the side were in possession.

Showed good control and played some neat passes in midfield, coming out of the game with a passing accuracy of 97%.

Played the first half of the game in the right attacking berth and struggled to get into the game.

Klopp changed things at half time, moving him into the centre where he could get more involved, and his pivotal role in the second half shows that he’s one of the more trusted youth players in the side, despite being one of the youngest.

Had the chance to win the game with a penalty in the last five minutes, but it was poorly taken and easy for the Plymouth keeper Luke McCormick to save. He’d missed four penalties previously for Lille apparently – and his poor technique was clear to see.

He started the game in the central attacking midfield position behind the striker, and it took him some time to adapt to the role.

Moved out wide to the right in the second half, but looked better when eventually moved to the left after the introduction of Wilson.

Played a good 1-2 with Sturridge in the second half, flicking the ball into the path of his team-mate who was able to have a good effort on goal as a result.

Finished the game as striker which is an indication of Klopp’s trust in the forward to fit into his system in numerous positions, and had a late shot after his penalty which blazed over.

Got the assist for the goal, taking the corner which was headed in by Lucas.

He played some good through balls for Sturridge, and some expansive passes out to the right for Alexander Arnold which put the side in good positions to attack.

Brought off midway through the second half, but this was another step towards match fitness following his injury absence.

Saw a right-footed effort sail over inside the first ten minutes, and was always a willing runner as he looked to get on the end of Coutinho’s through balls.

Should have been awarded a penalty but the referee wasn’t interested, despite it looking like an obvious foul.

Had a few more efforts on goal but needed a little bit more chemistry with his team-mates in order to get a really good chance on the back of one of his runs in the channels.

Finally made his Liverpool debut, having impressed in the youth teams for some time now.

Almost scored inadvertently minutes after coming on, as he closed down the opposition keeper, but the ball rebounded off him and over the goal.

Showed some good touches, and good awareness of his team-mates as he let a Gomez pass pass by him to Woodburn which started an attack.

Unlucky not to win a free kick in a dangerous area towards the end of the game, and in his frustration he went to ground easily shortly after and was booked for diving.

Klopp has commented in recent press conferences that though he takes the FA Cup very seriously, he is forced into fielding academy players due to the fixture congestion.

As a result he made only two changes to his starting XI from the game against Plymouth at Anfield 11 days ago, bringing Coutinho in for Emre Can, and Sturridge in for Ojo.

This meant a slight chance in formation, with Sturridge up top on his own, Woodburn on the right, Origi just behind Sturridge, and Coutinho returning to his position on the left.

The team struggled to mix, and there looked to be more understanding later in the game when more of the youth players were on the pitch, as they’ll be used to playing together.

It wasn’t a pretty result, but the team are through to the next round of the FA Cup having given some young players priceless experience over the two games.