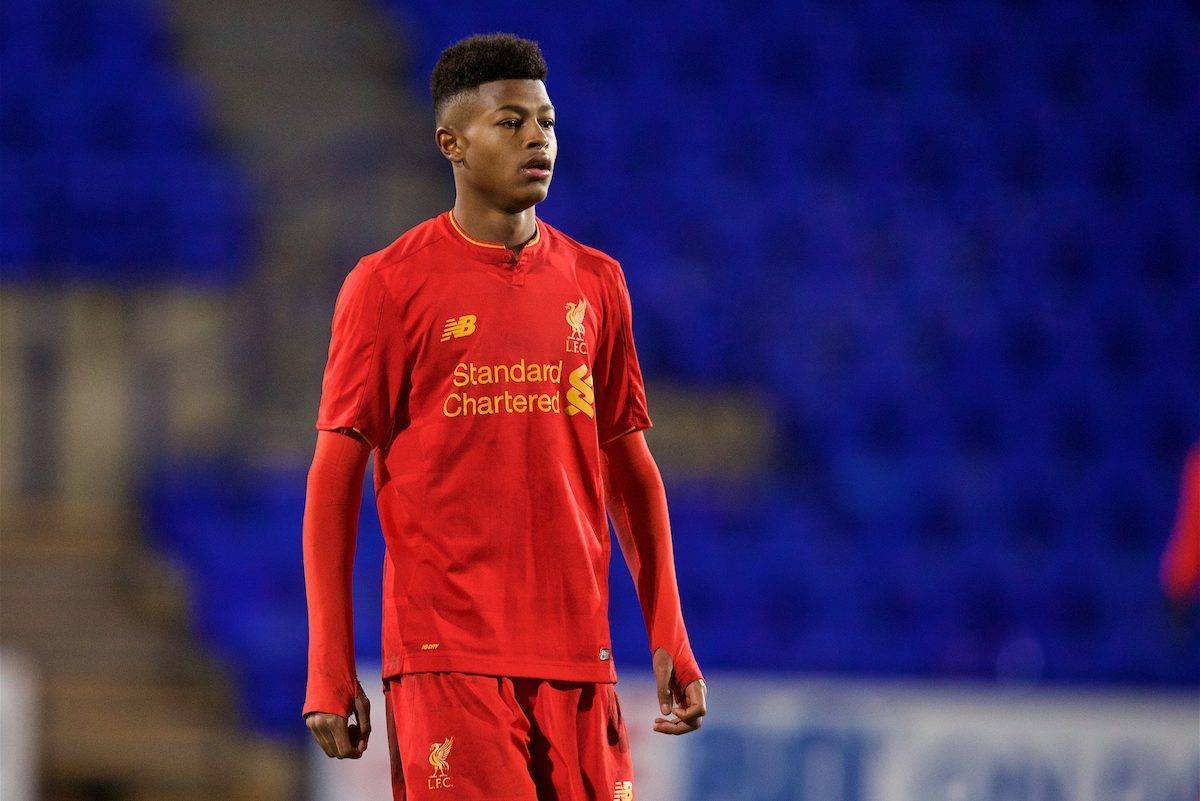 As Liverpool’s youth production line continues its positive progress, 17-year-old Rhian Brewster looks primed to be the next to break through in 2017.

Since Jurgen Klopp‘s arrival as Reds manager, the German has preached a heavy emphasis on the development of the club’s young players.

This has already continued into the new year, with Harry Wilson making his bow for the Reds in their 1-0 replay win over Plymouth Argyle in the FA Cup third round, and it won’t be stopping there.

The academy is set for another surge over the next 12 months, as Alex Inglethorpe and Pepijn Lijnders look to oversee their young stars’ transition through the ranks.

Brewster, who turned 17 earlier this month, arguably stands out as the most high-potential candidate, and while his progress is unlikely to be rapid, the youngster’s prospects in 2017 are hugely promising.

Signed from Chelsea in 2015, Brewster arrived at Liverpool on the recommendation of former U23s coach Michael Beale, who knew him from their time together in southwest London.

It is easy to see why Beale was so taken by the teenager, as despite being built with a nimble frame, he boasts the burgeoning quality to shine among more physically adept team-mates and opponents at youth level.

Quick off the mark and sharp of mind, Brewster can play as a poacher-type striker, but is also capable of performing a number of roles across the attack, and can often be seen drifting out to wide areas.

This makes him a difficult player to mark, while also making him the ideal player to operate in an interchanging forward line, suiting Liverpool’s system through the academy ranks.

Brewster mostly played U16s football in 2015/16, before stepping up to the U18s this season, making his first appearance as a substitute against Manchester City in August, and has been one of the most impressive players.

Most notable in 2016, however, were his heroics when called up to the England U17s squad, shining as a regular goalscorer for Steve Cooper.

Brewster netted six times in five games for the Young Lions, including a hat-trick in a 5-0 win over Croatia and a brace in an 8-1 victory over Germany in the Croatia Cup in September and October.

October was a big month for Brewster, with the forward also called into Klopp’s squad for a behind-closed-doors friendly against Bradford, while he scored a hat-trick in a similar fixture against Accrington Stanley the following month.

It was an impressive year for Brewster, but the spotlight is set to increase as he moves into 2017.

Filling the Void for the U23s Making his debut for the Liverpool U23s on January 22, Brewster lined up in an otherwise experienced squad, including Joel Matip, Joe Gomez, Alberto Moreno and Kevin Stewart.

In a 3-0 victory over Ipswich Town, Brewster netted the second, and was hugely impressive throughout, operating as Mike Garrity’s No. 9, supported by Sheyi Ojo, Ben Woodburn and Harry Wilson.

That Garrity opted to field Brewster as his centre-forward despite the presence of Woodburn in his starting lineup could be indicative of his future plans, with his hands tied by movements elsewhere.

Despite still being just 17, Woodburn is currently edging away from the U23s and closer to the first team, with his involvement against Ipswich something of a part-time venture.

Furthermore, with Brooks Lennon left out ahead of an impending loan switch to MLS side Real Salt Lake, Brewster has emerged as Garrity’s best regular option as his focal point in attack, with Ojo and Wilson also primed for the first team.

Lennon isn’t expected to play again for the U23s while he finalises his move back to America, presenting a big opportunity for Brewster in 2017—which Garrity implied after the win at Prenton Park. “I just thought it was the ideal opportunity to throw him in and see what he’s about. We’re delighted that he got his goal. He’s got a real eye for goal,” he told the Liverpool Echo.

“He did very well. He’s got a lovely personality and is a great character. He’s a wise old owl [for his age]. It’s about getting him working in the right way.

“He’s not trained with us at all but maybe moving forward the plan will be to nudge him towards our training group.”

Just as Woodburn made the swift rise from U16s to U18s to U23s in 2016, Brewster could be set to follow a similar trajectory, and just like Woodburn, this could soon grab Klopp’s attention.

Having handed 11 academy players their debut since his arrival as manager in 2015, Klopp’s focus on nurturing young talent is clear, as was evident on his second full day at the club.

After his unveiling on October 8, Klopp made his way to the club’s Kirkby academy two days later, to oversee the U18s’ 1-0 victory over Stoke City, with Ovie Ejaria scoring the winner.

Presenting a fitting symmetry as Brewster makes another step up through the ranks into the U23s, it was that win over the Potters that saw the young forward make his U18s debut, coming on as a second-half substitute.

While it is clear Ejaria caught Klopp’s eye more immediately, Brewster’s involvement will have been a talking point as the German watched on alongside Inglethorpe, Lijnders, Beale and Peter Krawietz.

Out of the spotlight with the U16s and U18s, Brewster has been able to continue his development without considerable pressure, which is something Klopp has been keen to stress throughout his tenure.

“We have a special kid. I won’t name him,” Klopp told Jonathan Northcroft in a recent interview for the the Times.

“But everyone was asking about him…now, now, now. Nobody has time any more.”

While there are a number of candidates that would fit the description of “special kid” in the Reds’ academy, it is very possible that this player could be Brewster.

With Klopp looking to diffuse any hype about his young players, Brewster should be expected to burst through onto the senior stage any time soon.

And still 16, nor should he be expected to star in every game at U23 level.

But as Alexander-Arnold, Ejaria and Woodburn have shown this season, there is a clear route through the ranks at Liverpool now, and Brewster can build himself the best platform in 2017.