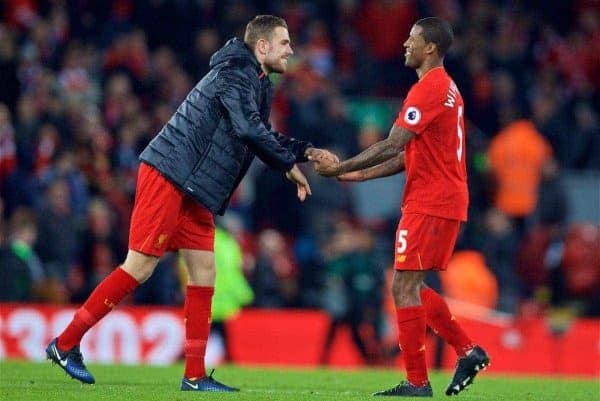 “When the stakes were high, they delivered to a man” – How the media assessed Liverpool 1–0 Man City

The media felt Liverpool’s superior work-rate and ability to win despite not being at their best proved the deciding factors to claiming a huge three points against Man City.

Jurgen Klopp’s side signed off a year of rapid progress with a deserved 1-0 victory to maintain their Premier League title pursuit.

Georginio Wijnaldum’s powerful header from Adam Lallana’s cross after just eight minutes proved to be the decisive moment at an atmospheric Anfield.

It was not a vintage display from the Reds – in fact James Milner labelled it the worst of the season – but in the middle of a gruelling schedule, the work-rate and desire produced – especially in a draining second period – was magnificent.

Klopp will, rightly, be delighted with his team’s efforts as they ended 2016 with a fourth straight win, and attention now turns to ensuring rewards for the huge improvement overseen by management and players arrive in 2017.

Before that happens, here’s what the media made of another victorious night for Liverpool.

Reporters felt Liverpool were far from their vintage best, but still praised the Reds for their desire to out-work Pep Guardiola’s men in pursuit of victory, which proved the difference between the sides.

What never shifted was the impeccable attitude of Liverpool’s players whereas their opponents, in stark contrast, took an age to get going.

The Telegraph’s James Ducker felt Klopp’s side showed greater strength and aggression in the physical battle:

Guardiola has worked specifically in training over the past fortnight on winning second balls but his team remain too passive at times and lack the aggression of Klopp’s Liverpool.

With a lead to hold, Liverpool were then solid and organised with Ragnar Klavan and Dejan Lovren doing the simple things that City’s back four repeatedly struggled to manage.

Jurgen Klopp‘s team also worked harder than City, winning most of the second balls and pressing the blue shirts every time goalkeeper Claudio Bravo had the ball at his feet.

The Liverpool Echo’s James Pearce praised the Reds for delivering when it mattered most:

Liverpool have played better and enjoyed more emphatic wins this season but none quite as crucial as this. When the stakes were high, they delivered to a man.

The message sent to Stamford Bridge was loud and clear: Liverpool are going nowhere. They are in this race for the duration.

Their sheer determination, enthusiasm and the momentum they generate demand they be taken seriously.

Klopp, in 15 months, has revitalised Liverpool and given hope to supporters longing to end the wait for a first title since 1990.

Klopp has become the new Anfield talisman. Under him, the transformation of his team and the mood around the club continues.

Reporters praised Liverpool for finding another way of winning yet again when not at their blitzing best, with certain journalists feeling this could prove significant for the Reds’ title hopes.

Writing for Joe.co.uk, Tony Barrett thought the Reds won with a performance their detractors felt was beyond them:

This was exactly the kind of victory, gritty, resolute and determined, which Klopp’s own detractors had claimed was beyond his team.

In the midst of a hectic fixture schedule, Liverpool had ground their way to victory simply by doing the basics better.

McNulty was among those to note how Liverpool proved they can win in different ways, the reason why they must be taken “very seriously”:

They have also shown they can win in different ways. Recent victories over Middlesbrough and Stoke showcased a free-flowing style.

At Everton and against City, they toughed it out – and answered questions about a supposedly vulnerable defence. It is evidence that Liverpool must be taken very seriously as title challengers.

For Goal.com, Melissa Reddy praised Klopp’s side for forcing victory despite being denied the chance to play their usual free-flowing game:

And Guardiola found himself on the long list of managers wondering just what the formula is to foil the Anfield outfit. City had disrupted the Reds’ usual fluidity, not allowing them the freedom to create, yet the hosts still forced a win.

The Telegraph’s Chris Bascombe believes the Reds are making a welcome habit of winning such games:

Liverpool do not often win games in this way – their defensive excellence came to the fore after they’d secured a decisive early lead – but they’re making a habit of winning these types of games.

The Mirror’s Mick Gadd took encouragement from the way Liverpool saw the game out:

For all their flair, the most encouraging sign for Liverpool fans will be how they closed out a game against an opponent who should have had a more emphatic answer to their early opener.

The players in red never gave their opponents a moment’s peace in the first half but after the break, when they switched to a more conservative system, they can also take great encouragement from the fact City had lots of the ball but did not create one clear opportunity.

Certain reporters assessed Klopp as the winner of the battle of the managerial heavyweights against Pep Guardiola, and offered thoughts as to where the tactical fight was settled.

Ducker thought Klopp provided Liverpool with greater motivation than Guardiola did for City:

Liverpool started the game sharper, faster, hungrier, everything Klopp would have wanted and expected.

Guardiola is renowned for demanding total focus and concentration from his players so why are they routinely starting matches so sleepily, so half-baked and leaving themselves with an uphill task?

ESPN’s Steven Kelly felt Klopp’s decision to introduce Emre Can in place of Divock Origi was a shrewd move:

His decision to play safe with Emre Can instead of Divock Origi paid dividends when Liverpool were under intense pressure to protect their narrow lead.

The German will be pleased with how his players stuck to a thankless yet vital task.

The Liverpool manager opted to drop Lallana into midfield from his position on the left and introduce Divock Origi upfront. Lallana made the change seamlessly while Origi provided another pacey outlet in attack alongside Sadio Mane and Firmino.

The surprise was Guardiola waited until the final five minutes to change things.

Ogden feels Klopp has coaxed greater individual performances out of the Reds than Guardiola has managed:

Liverpool, in contrast, are a team of players who have stepped up another level under Jurgen Klopp‘s management. He has got into the heads of Adam Lallana, Jordan Henderson, Dejan Lovren and Roberto Firmino, all of whom are more influential and consistent performers than they were under Brendan Rodgers.

Finally, the watching reporters gave their verdicts on who shone at Anfield, with praise forthcoming for match-winner, Wijnaldum, and defensive duo, James Milner and Ragnar Klavan.

Gadd felt Wijnaldum’s winner was the reward for his “quietly excellent” performances:

He has, however, been quietly excellent in the last few games, with his goal here a just reward for those efforts.

The former Manchester City player is so much more than a fill-in at full-back. Tasked with keeping Raheem Sterling quiet in this game, no easy job even if the winger rarely shines against his old side, Milner still found time to get up in support of the players ahead of him and distribute the ball with his usual reliability.

Ogden highlighted Klavans performance and believes he is proving a magnificent piece of business:

James Milner, facing his former club, was once again excellent at left-back, while centre-half Klavan suggested he has the qualities to become a mainstay at the heart of Liverpool’s back four.

Considering City have spent in excess of £100m on new centre-halves in recent years, acquiring Klavan for just £4.2m is testament to Liverpool’s scouting and an indictment of City’s.

Bascombe reserved special praise for the Reds’ defensive unit as a collective:

The much maligned Liverpool defence came to the fore, undermining claims that will be the Merseysiders’ undoing [in the title race].

Finally, Ducker reflected on a complete team effort and noted the impact of the Anfield crowd:

By contrast, Liverpool, unfazed and undaunted, are rising to the big occasion under Klopp. Having such a vociferous home crowd must aid that process, though.