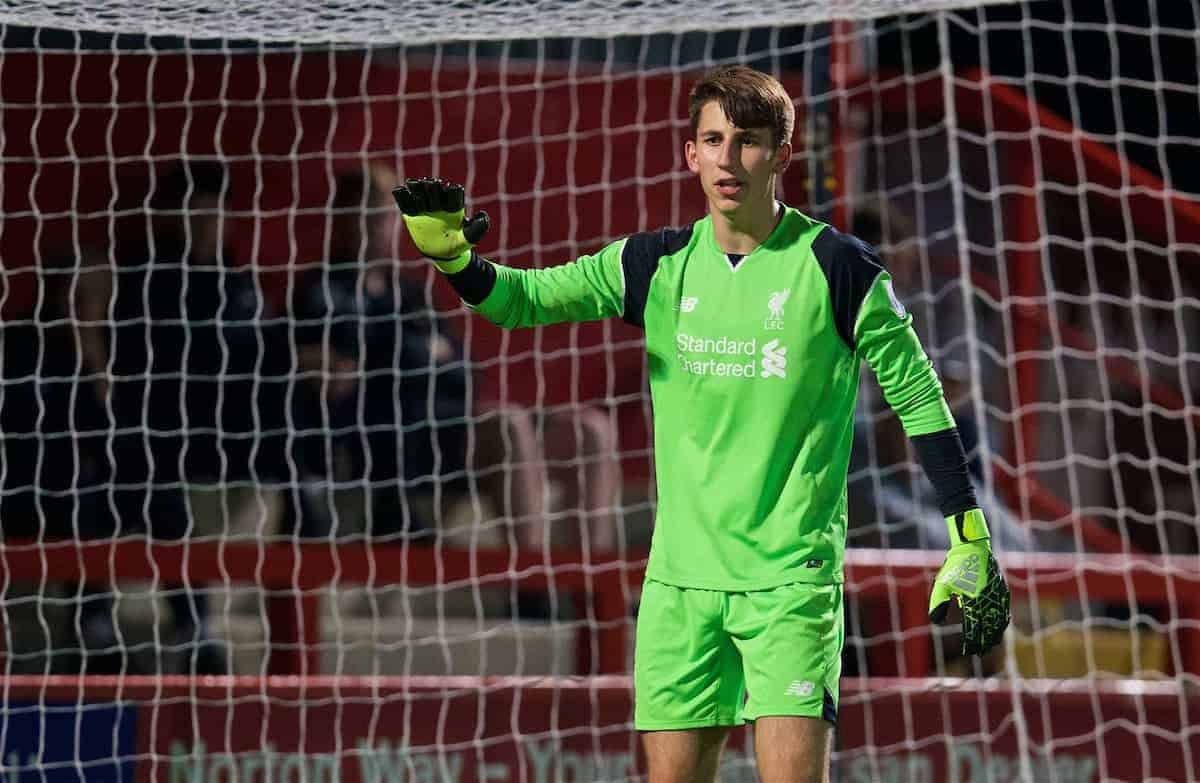 Jurgen Klopp currently has both Simon Mignolet and Loris Karius as options at first-team level, with the pair competing for the role of first-choice goalkeeper, while Alex Manninger provides experienced cover.

But with the German describing is job as a “long-term project,” there will always be one eye on the future of the club, and that is no different between the sticks.

Fortunately, the Reds have a plethora of young goalkeeping talent in their academy, all vying for a future as Liverpool’s No. 1.

They can count two of those in loanee duo Danny Ward (Huddersfield Town) and Ryan Fulton (Chesterfield), but for now, Edwards’ focus is on those currently in the club’s academy.

And speaking to LiverpoolFC.com, Edwards discussed the Reds’ vision for their young stoppers, most notably a trio currently turning out for the U23s and U18s: Grabara, George and Kelleher.

Edwards described Grabara, who joined from Polish side Ruch Chorzow at the beginning of 2016, as a “big, big lad,” identifying the 17-year-old’s “decision-making” as his key attribute.

“He picks up the danger early and he makes the decision to either catch the ball or punch it clear with his strong hands away from the danger area,” he said. “That is a good trademark to have.”

He also praised Kelleher for having made “a very promising star,” while George was hailed as “an outstanding young goalkeeper.”

With Ben Williams and Dan Atherton also name-checked by Edwards as ones to watch, there are clear reserves of shot-stopping talent in the Liverpool academy.

At 18, 18 and 19 respectively, it is likely to be a long time before Grabara, Kelleher or George secure themselves a regular first-team role, but the foundations are there for them to do so.

As Edwards continued, he detailed the work he undertakes to ensure this is the case, with senior goalkeeping coach John Achterberg playing a key role.

“We have regular meetings with the first-team goalkeeping coach John Achterberg when we speak about the progress of our goalkeepers,” he continued.

“John is someone who always gives youth a chance and our young goalkeepers regularly get the chance to go up and train at Melwood with our senior ’keepers.

“This is brilliant for our young lads because they then get to see the level they need to be at and get even better in order to stay there.

“John is very hands-on, we speak with him three or four times a week and he is aware of everything that is going on.”

While Achterberg often comes under criticism from Liverpool supporters due to the struggles of the likes of Mignolet, Karius and even Pepe Reina in recent years.

But it is clear Klopp has great faith in the Dutchman, and he will be central to the hopes of Grabara, Kelleher, George and their young colleagues as they push for a senior role in the future.