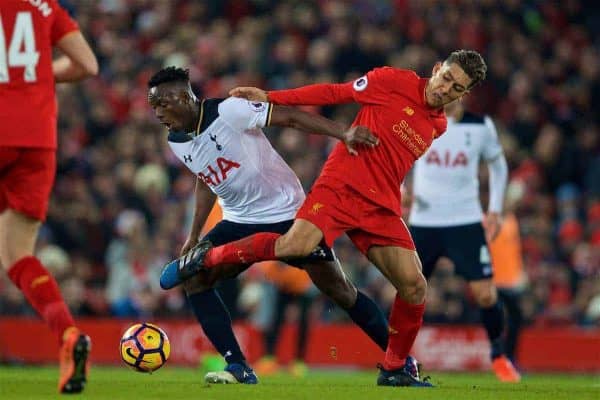 Liverpool produced a phenomenal display, littered with individual brilliance, to secure a 2-0 win over top-four rivals Tottenham on Saturday evening.

Before the game, there were suggestions that Jurgen Klopp could have opted to drop Mignolet and bring Loris Karius back into the fold, but this proved not to be the case, and it was clear why.

The German may have had strong words with his first-choice stopper in midweek, but he was rewarded with an exceptional display, marked by a series of strong saves and, crucially, a swift, front-footed approach in possession.

Liverpool’s full-backs have struggled of late, but Clyne was in excellent form bombing down the right flank on Saturday evening, provided his side with one of their most invaluable outlets.

Recent appearances had seen Matip more hesitant at the back, no doubt due to his time on the sidelines, but this victory saw Klopp’s defensive stalwart return to form.

He was strong and timely in his defensive work, and as progressive as ever in possession, providing that line-breaking presence with a host of incisive balls forward into attack.

With Dejan Lovren still suffering a knee injury and Ragnar Klavan recovering from a six-day illness, Klopp was forced to deploy Lucas alongside Matip at centre-back again, prompting concern within the Kop.

While the duo struggled against Hull City last weekend, they shone in Saturday’s win, and Lucas was particularly impressive, nullifying the threat of Harry Kane adroitly. A fine showing.

It would be remiss to describe this as a bad performance from Milner in any respect, but the vice-captain was one of Liverpool’s least effective on a night where they were brilliant all-round.

Milner provided a welcome outlet in attack in the first half, but suffered a drop-off in efficiency after the break, and it was a surprise not to see Klopp bring on Alberto Moreno.

After calls from ex-Liverpool players to install a new midfield general at the base of Klopp’s 4-3-3, Henderson produced a statement display in the No. 6 role, underlining his credentials once more.

He was quick and decisive in possession, and provided his team-mates with a solid defensive shield, outshining the likes of Victor Wanyama, Mousa Dembele and the frustrated Dele Alli.

With Lallana set to sign a new four-year, £150,000-a-week contract in the coming days, Saturday required a big performance from the 28-year-old, as scrutiny increased over his input.

He mustered just that, pairing his tireless defensive work with a slick attacking zeal, and he was unlucky not to get his name on the scoresheet in the first 20 minutes, thwarted by Hugo Lloris.

Georginio Wijnaldum – 9 (Man of the Match)

A truly masterful display by the Dutchman. Wijnaldum provided Liverpool with speed, direction and incision in his box-to-box role, playing with a confidence belying his muted role of late.

This was arguably the summer signing’s best performance since joining the club, and while Sadio Mane will hog the headlines for his brace, it was Wijnaldum who fuelled this most vital of victories.

Mane’s absence during the Africa Cup of Nations was unquestionably the catalyst for Liverpool’s downturn in fortunes since the turn of the year, and it is excellent to have the 24-year-old back.

He tore Davies apart throughout the evening, with his pace and direct attacking style troubling a typically rigid Spurs defence, while his finishing was top-notch. Could have scored four.

Saturday marked four years to the day since Coutinho made his Liverpool debut, and while he has established himself as one of the club’s most important players since that outing, he was quiet against Spurs.

Coutinho is still struggling to find fluency after a long spell out with injury, and though he did still contribute to some excellent buildup play, he will be disappointed not to do more.

Speaking after the game, Klopp lavished considerable praise on Firmino, saying: “I don’t think I’ve seen a better performance from a striker without scoring.”

While the No. 11 failed to get his name on the scoresheet, he provided exactly what Klopp required in terms of industry, creativity and movement in the final third.

It is no surprise he has kept both Daniel Sturridge and Divock Origi out of the starting lineup.

Trent Alexander-Arnold (on for Mane, 90+2′) – N/A – His introduction gave Anfield a chance to applaud Mane.

Klopp has come under widespread criticism of late, but the German kept faith in his side despite calls for wholesale changes from supporters and prominent pundits alike.

Making just once alteration to the side that lost 2-0 to Hull last weekend was a bold move, but he was vindicated by a host of excellent displays, most notably by the under-fire Mignolet and Lucas.

Furthermore, the decision to replace Can with Wijnaldum proved a masterstroke, with the Dutchman producing exactly what Liverpool needed to navigate what could have been a tough midfield battle.

With the Reds now out of both the FA Cup and the League Cup, Klopp will be afforded more time on the training field with his side, and hopefully this should bring more of the same until May.