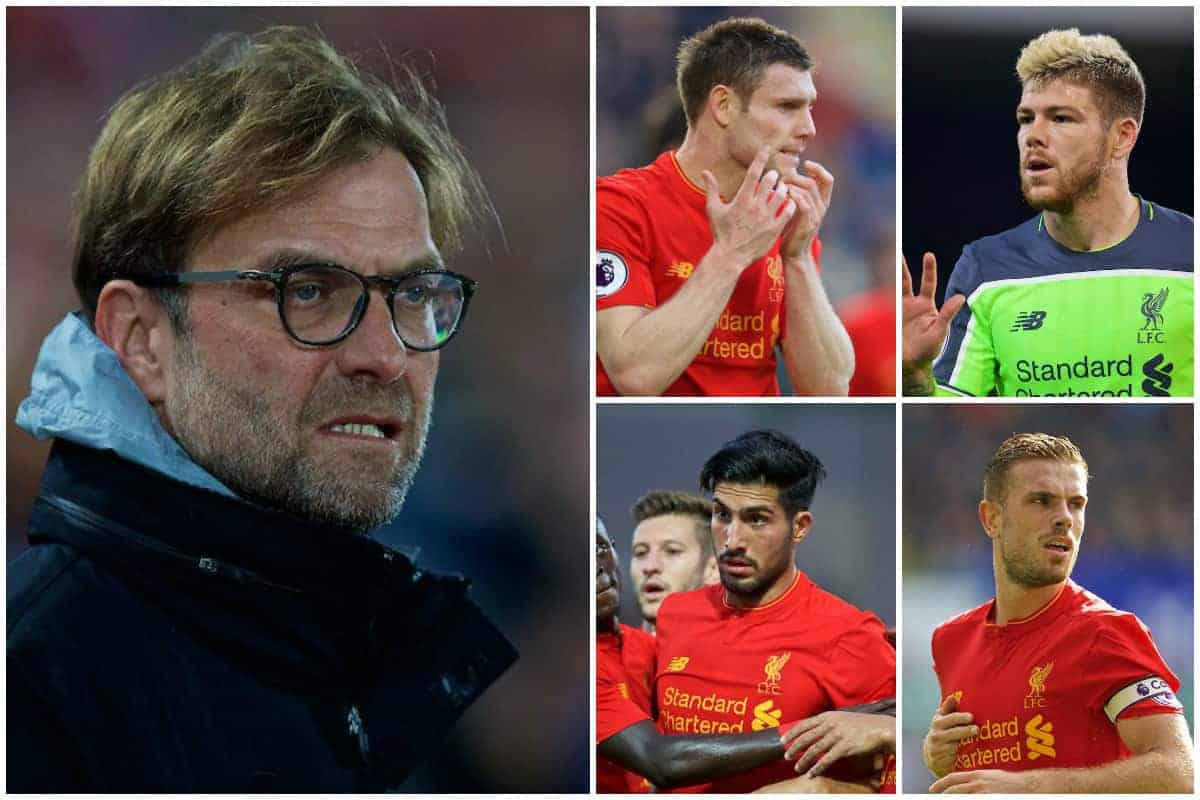 Would moving James Milner into the midfield role on Saturday work? And provide pace out wide with Alberto Moreno at left-back?

Liverpool’s defensive woes are so obvious now that it is still hard to believe Jurgen Klopp utilised two midfielders in the back four against the reigning champions on Monday evening.

With Milner and Lucas Leiva both lining up as part of the defence it appeared to be an experienced back four, but the truth is neither player is experienced in playing as a defender.

The duo may have years of Premier League action under their belts but both learnt their trade in the middle of the park and there are clear disadvantages of playing them, effectively, out of position.

Milner, Liverpool’s stand-in captain in the absence of Jordan Henderson, has been utilised at left-back this season, but since the turn of the year he’s struggled in the role and his lack of pace was widely exposed against Leicester City.

The opportunity for the Foxes to expose Liverpool’s 31-year-old left-back and 30-year-old left–sided centre-back was glaringly obvious, and Jamie Vardy did just that.

Milner and Lucas were left in his shadow for large parts of the game because they couldn’t keep up with his pace. On numerous occasions, Leicester were able to take advantage of counter-attacking opportunities because Liverpool lacked speed down the left side of their defence.

Not only their age, but Lucas and Milner cannot rely on their positioning to combat the threat of pace as they are still relative novices in their respective new roles.

They aren’t Sami Hyypia—being able to make up for a lack of pace with speed of reading the game. Mind, at least Hyypia had a good defensive shield in front of him in midfield.

You could suggest that while Milner as a left-back worked early on in the season, it’s now been figured out by opponents as the season has progressed.

Theo Walcott and Alexis Sanchez in particular possess great pace and if Liverpool are too open at the back, Arsenal will be given opportunities of threat.

Granted, Milner did well against Raheem Sterling when Liverpool recorded that 1-0 victory against Man City on New Year’s Eve but since then he has struggled and that display was more in isolation of late.

The most obvious solution would be to replace Milner with a specialist left-back and Moreno is the only viable option who could come in.

The Spaniard has been heavily criticised during his time in Merseyside, and rightly so given a number of poor performances, but one attribute Moreno does have in abundance is pace.

The defender enjoys getting forward and joining the attack but his defensive solidity has let him down time and time again.

He does however, possess the ability to track back quickly even when pushing forward on the wing—and with Walcott the likely opponent, it would make sense to have somebody on the pitch who can match his speed.

This is, of course, not simple given Moreno’s poor display at the Emirates against Arsenal on the opening weekend of the season.

Perhaps this would give him an opportunity to show he’s learned from that eight months on?

Ideally, the occasion to use Moreno would probably be better suited against a team like Burnley, who are likely to sit back and invite Liverpool to keep possession. His pace and width would be a useful tool to help break down the defence.

However, results and tactics have not worked so far in 2017 so a change may not be a bad idea.

Not only would Moreno’s introduction counteract some of Arsenal‘s threat of pace, it would allow Milner to move into midfield.

Without Henderson, Can was the obvious choice to come in on Monday but his sluggish performances of late were reproduced in the opening 45 minutes before he moved back into a new-look back three.

Can has plenty of potential but he is still learning the game and at the moment he appears to be one step behind everyone else on the pitch.

Many fail to recognise Henderson’s importance in midfield but in his absence it is clear to see where Liverpool fail to compensate.

Henderson is positionally strong and he is usually in the right place at the right time; he keeps the ball moving, whether it’s backwards or forwards and he dictates the pace of the game.

Without him, Liverpool lack structure in midfield and the defence is more easily exploited through the middle.

Milner, compared to Can, does have plenty of experience and has played in the holding midfield role on a number of occasions throughout his career.

When he first joined Liverpool, the vice-captain was utilised in that role alongside Henderson, so it makes sense to re-introduce him to the midfield for this important clash. His defensive traits can provide extra support to the back four.

He has struggled on occasions of course, but Liverpool have relatively few options available due to a lack of spending in January and changes need to be made.