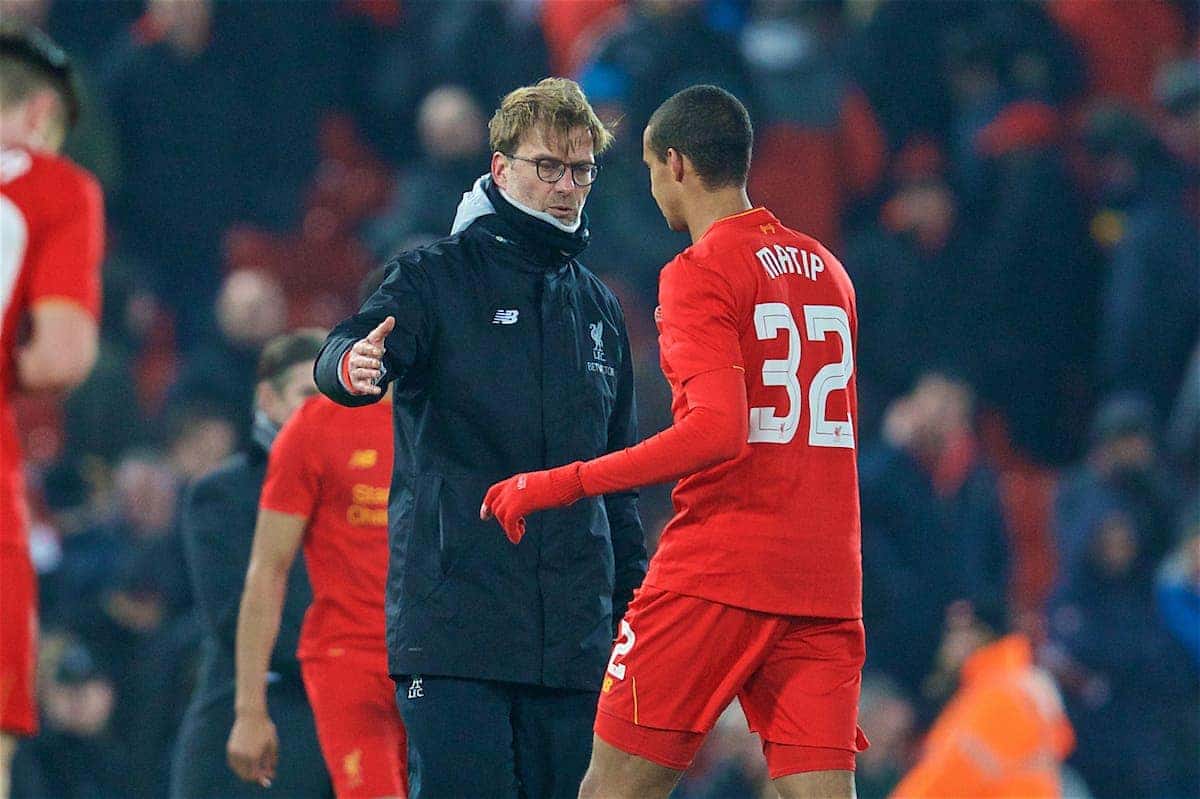 There are undoubted flaws in Liverpool’s squad, but with scoring goals no issue, bringing in a top class centre-back partner for Joel Matip must take precedence this summer.

No team appears to enjoy gifting opponents goals more than the Reds.

The vast majority of the 34 goals they have conceded in the Premier League this season have been soft and it is infuriating for us supporters to watch.

It would be harsh to blame this solely on the defence, with goalkeepers, midfielders and forwards also culpable, but Liverpool’s back-line remains unconvincing and continues to undermine the impressive attack at the other end.

With 20 different centre-back pairings used in Jurgen Klopp‘s 17 months in charge, the manager can no longer ignore the defence this summer and must sign a long-term partner to play alongside Joel Matip.

It has been almost painful watching Lucas Leiva at times, but in fairness to the Brazilian, he should never have been playing at centre-back in the first place.

Although he has only just turned 30, Lucas’ pace is almost non-existent, and he has never fully convinced since Klopp turned him into a defender last season.

That he has been picked ahead of Ragnar Klavan on occasion in Dejan Lovren‘s frequent absences, has been somewhat baffling.

Speaking of Lovren, it has been clear for far too long that he is not somebody you can rely upon.

He has good days, many of which he doesn’t receive enough credit for, but his erratic nature and faux hard-man act bring no calm whatsoever to the team.

There is no reason why the 27-year-old cannot be retained as a squad player next season, able to cover on both sides of centre-back, but a noticeable upgrade is required.

Furthermore, the Croatian’s frequent injury problems are another thing working against him, with seven different issues ruling him out this season already. That’s one for each month of the campaign.

It is worth noting that Joe Gomez remains a promising prospect, but Klopp is being very careful in how he handles the teenager’s return from serious injury. He is not yet ready to start regularly.

Ask most Liverpool supporters who the ideal man to partner Matip would be, and Southampton‘s towering class act Virgil van Dijk is mentioned more than anyone.

The Dutchman is a colossus of a centre-back in almost every department, with height, pace, quality on the ball and leadership all standing out. His performance against the Reds at St Mary’s in November was almost perfect.

Van Dijk is sure to have several potential suitors this summer, so it is easy to see him going to one of Liverpool’s wealthier rivals instead, as we have become depressingly accustomed to.

That would be a blow, but there are plenty of options elsewhere, should their ideal man not be acquired.

Bayer Leverkusen’s Jonathan Tah is an attainable target, and the 21-year-old is both a player of enormous potential and someone who can deliver in the present.

At almost 6’4″ tall, Tah would bring aerial ability that Liverpool lack, barring Matip, and also more strength and composure than the likes of Lovren, Lucas and Klavan.

Real Sociedad’s Inigo Martinez would be another good buy, and was someone we tipped to fill the Sakho void last summer, while Lazio’s Stefan de Vrij is a quality defender who has been on both Chelsea and Tottenham‘s radar.

No good partnerships of late

You have to go all the way back to Rafa Benitez’s time in charge to see the last time Liverpool had a genuinely excellent centre-back pairing.

That was Sami Hyypia and Jamie Carragher – two very different but equally superb defenders who complemented each other and possessed admirable levels of consistency.

Since then, goals have been leaked at a continuous rate and, barring one good defensive season under Kenny Dalglish when Steve Clarke’s influence bore fruit, there has never been a reliable, settled duo at the heart of the Reds’ defence.

When Benitez left in the summer of 2010, his underperforming Liverpool side had still only conceded 35 goals in their 38 league games. In every season since his exit, however, the least goals the Reds have let in is 40.

That Klopp has used 20 different pairings since taking charge proves just how unsettled his defence has been.

Liverpool and their 20 centre back partnerships under Klopp pic.twitter.com/TxOXRJcmmx

It is a genuine shame that Sakho’s off-field issues have understandably seen him shipped off to Crystal Palace – he has kept successive clean-sheets in his first two games for the Eagles – because he and Matip could excel together.

The Frenchman will forever divide opinion, but Liverpool almost always looked better with him in the side, and he remains superior to Lovren.

Whether both good form and an improved attitude at Palace is enough to win Klopp round remains to be seen, but if he doesn’t return, at least one big-money defender is paramount.

Reinforcements in goal, left-back, central midfield and attack are all desirable this summer, but centre-back has to be considered the priority.

While a 20-goal-a-season striker would be nice, Liverpool have no problem scoring goals – more than anyone else in the league so far this season. Mane and Firmino are already in double figures, Coutinho, Lallana and Origi could all join them before the end of May.

History shows that you simply will not achieve success with a poor defence and it has been Liverpool’s main weakness for far too long now.

The Reds’ inability to win matches when not at their best is unrivalled, and it will keep happening if such soft goals are being conceded.

A rock-solid centre-back pairing would help immensely and Klopp has to find someone with consistency, leadership and a good track record with injuries to play with Matip.

Van Dijk would be a sensational piece of business, but if that doesn’t come to fruition, someone of similar ability must arrive.