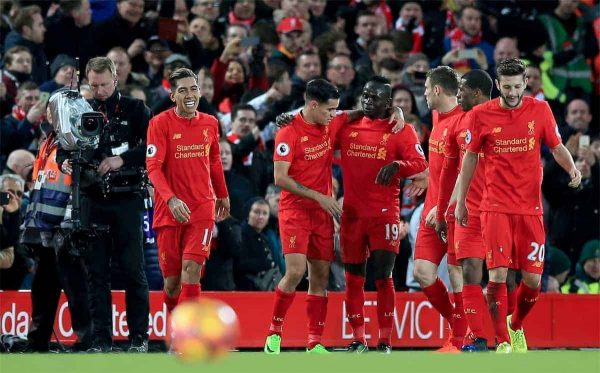 Liverpool returned to winning ways against top four opposition and put in a display which gives hope for the rest of the season.

There was a zip about Liverpool’s play against Arsenal which has rarely been seen in 2017, even in their two victories.

The energy was pulsing through the side as they dominated the game in the first half, both in terms of possession and on the defensive side of things.

Adam Lallana was so frantic in that first period, working hard and closing down every opposition player within sight, that it was a wonder he was able to come out for the second.

Philippe Coutinho was back to his magical best, controlling the game in the attacking third and causing several Arsenal players problems throughout the game.

Roberto Firmino was back on the scoresheet, and also displaying his own array of tricks, while Georginio Wijnaldum continued to prove that he’s one of the club’s most astute signings in recent years.

It was a game in which Sadio Mane terrorised Arsenal left-back Nacho Monreal, and just behind him Nathaniel Clyne put in a performance which may finally see him awarded an 8/10 in the player ratings.

Jurgen Klopp‘s side had been playing their football on mute in recent weeks, but this was a return to full-on heavy metal football.

31-year-old Ragnar Klavan made his first start since Liverpool were knocked out of the FA Cup at the hands of Wolves. That day, like the rest of the team, he failed to perform, so this was an opportunity for the Estonian to atone.

Lucas and Dejan Lovren had to settle for a place on the bench as Klopp looked to solve the central defensive problem by partnering the left-footed Klavan with Joel Matip, who is right-footed.

Klavan began the game with an eye-catching left footed pass pinged across field to Clyne and Mane. This was a sign of things to come as he played several good lofted passes in behind the Arsenal defence.

The back line looked well balanced and the only time Klavan struggled was when Olivier Giroud had to foul him in order to win a header at the start of the second half. The referee failed to spot the infringement, but luckily Simon Mignolet was on hand to save the effort.

With five minutes to go Klavan was able to make an important block from Lucas Perez’s powerful left-footed effort with the score at 2-1, which would have troubled Mignolet had it got through.

He coped well with the Arsenal attack as they pushed for an equaliser late in the game, and the performance should see him retain his place even when Lovren returns to full fitness.

Can in charge and leading the way

As the Kop welcomed the players to their end of the field following the pre-match handshakes, it was notable that no player responded in acknowledgement.

Joran Henderson usually applauds the Kop as he trundles down to warm up with the mascots, but there was none of that here until Mignolet took his place between the posts.

The team began the game as tentatively as they’d entered the pitch, but soon got into the swing of things thanks in part to the fact that Arsenal let them.

Vice captain James Milner wears the armband in Henderson’s absence, but it was the captain’s positional replacement, Emre Can, who was the most vocal of the outfield players, especially when the side were defending.

Simon Mignolet shrieked occasionally from the back, but it was Can who led in terms or organisation and by putting himself about physically in the middle of the park.

He’s sometimes a bit too eager to make challenges, but he picked up what would be considered a good yellow card when he felled Sanchez as the Chilean was about to break.

It was one of those games where the team play so well as a unit, that the collective is the leader, and though the team still lack obvious captain material, it was an impressive showing from Can in Henderson’s place.

The players keep their heads and secure the win

At 2-1 the game was in the balance and it would have been typical of the modern day Liverpool side to crumble in the second half and only claim a point, or even worse, lose the game altogether.

But it wasn’t the case here, and they even went on to score a third.

Alexis Sanchez entered the fray in the second half for the visitors, causing the right side of Liverpool’s defence problems and contributing to Danny Welbeck’s goal.

Arsenal visited Mignolet’s area more often than they had in the first half, and some sloppiness began to creep into Liverpool’s play as free kicks were conceded and the ball was given away.

After one of these free kick concessions, Klopp signalled over to his players, pointing to his head with both hands, encouraging them to concentrate on the task in hand.

It seemed to work, and though there were a few scares the side were able to see the game out well, as they had done against Spurs earlier in the month.

When substitute Divock Origi broke away in injury time, many would have hoped that he’d run to the corner and wind the clock down, but instead he played a perfect cross into the onrushing Wijnaldum who was able to finish well and secure the three points.

The big test could be Burnley

If Liverpool are to remain true to recent form then it’s likely that they’ll follow this win against Arsenal with a struggle at home to mid-table Burnley.

Sean Dyche’s side are yet to win away from home this season so it should be a routine victory for the Reds, but lesser teams have fared well against Klopp’s side in 2017.

The eleven which started here played well enough to retain their place in the side for next week, regardless of players returning from injury, but it will be a different test altogether against the Lancashire club and it’s one which Liverpool need to prove they can pass.