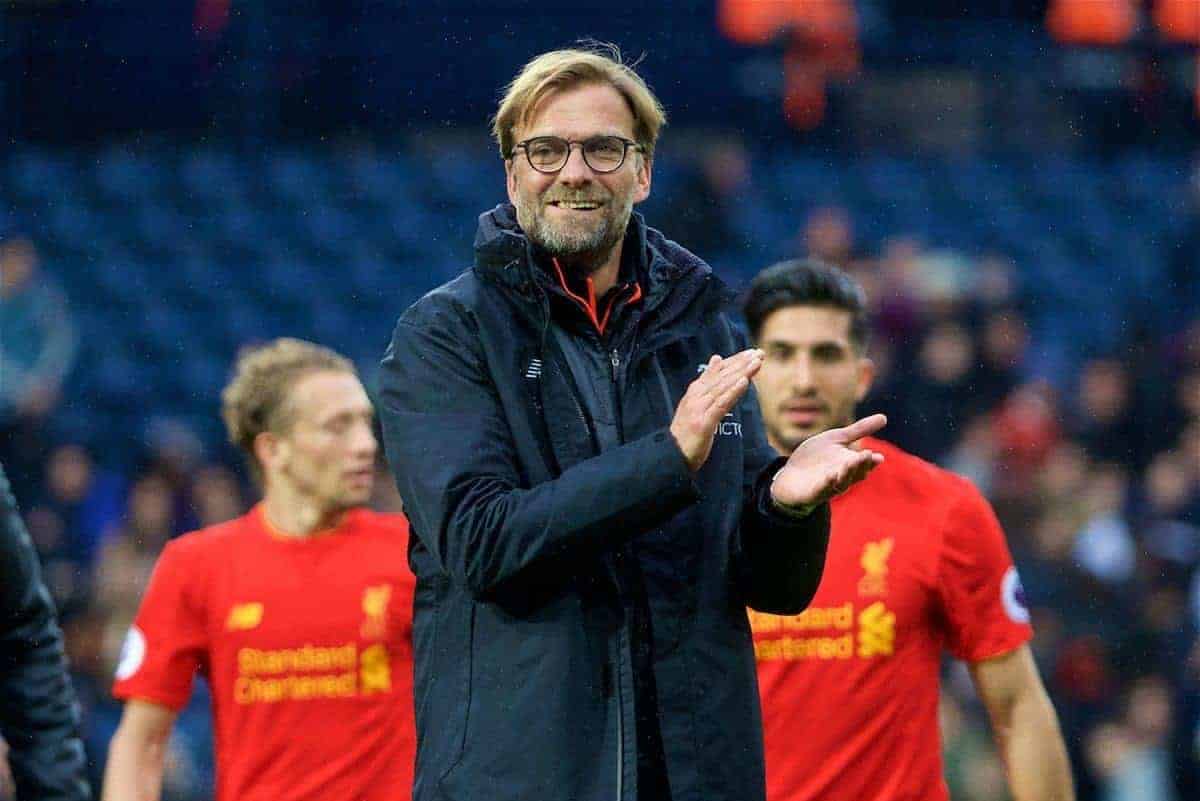 Roberto Firimino’s header secured a 1-0 win to lift Liverpool up to third in the Premier League and helped end Tony Pulis’ hold over them.

It was Liverpool’s first win in eight attempts away at a Pulis side in the Premier League following Firmino’s first-half winner on Sunday.

Klopp’s men moved above Manchester City in the table and he admitted victory was crucial.

“I don’t think we made crazy [celebrations]. But we are very happy, three points today, so 66, that’s a wonderful number for the next six or seven days,” he said.

“And then we want to move onto 69. I really thought that the boys, in a really difficult game, did really well.

“You can always do better but we learned already in the game. I liked it a lot that in the second half we looked better tuned than the first half.

“We knew what do to but in the first half we looked a little bit static. In the second half it looked much better, so I’m really happy about the performance.

“It’s one of the most difficult places to go because you can’t feel comfortable in one moment of the game.

“Somebody asked which scoreline would have kept me a little calmer in the last few minutes, and I said: ‘Only 4-0 after 86 minutes’.”

And Klopp admitted he could see how Pulis had frustrated Liverpool on their travels for so long.

“I can understand why. It’s a difficult place to come but that doesn’t make us more happy,” he said.

“It’s really three very important points at a difficult place and that’s improved our base for the rest of the season, so I’m happy about this.”

Firmino won it seconds before half-time, heading in James Milner‘s free kick after Lucas had flicked it on.

Alberto Moreno should have made it 2-0 in injury time after goalkeeper Ben Foster joined the Albion attacks but missed an open goal from 40 yards after Foster and James McClean lost the ball.

Albion have now failed to score in their last four games—losing five of their last seven—and boss Pulis was disappointed with his side’s failure to convert the chances.

“It’s missed chances. We’ve had the opportunities again and especially against the top teams you have to take your chances,” said Pulis.

“We’ve had three really good opportunities where I would have expected them to score but you can’t criticise them.

“My one disappointment about our performance was the first 20 minutes of the second half.

“They scored bang on half-time with a goal that we’re disappointed with because we think [Craig] Dawson was fouled. But we’ve still got to defend better.”