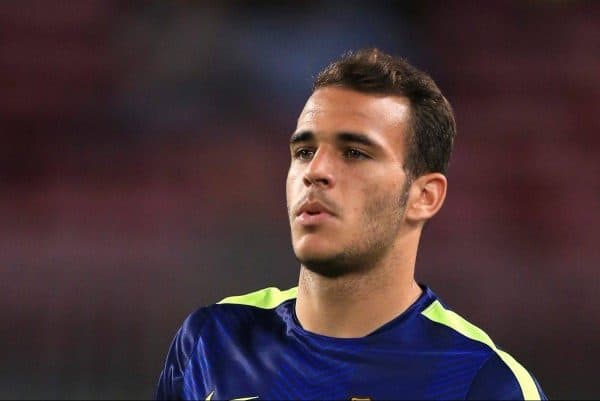 Liverpool have been mentioned among a host of Premier League clubs weighing up a bid to trigger Malaga striker Sandro Ramirez’s release clause.

Jurgen Klopp is currently weighing up his options ahead of the summer transfer window, working with his backroom staff, including sporting director Michael Edwards.

High on his agenda will be bolstering his attacking ranks—particularly in the wide areas, but a striker could also be on Klopp’s radar.

With Daniel Sturridge expected to leave, and Danny Ings‘ fitness yet to be determined, this would leave Klopp with just Roberto Firmino and Divock Origi as his senior options up front.

And this could lead the Reds to make a move for Malaga’s former Barcelona striker Sandro, if reports in Spain are to be believed.

AS claim that the 21-year-old has a release clause of around £5 million in his current contract.

Liverpool are touted as one of the club’s interested, along with Stoke City, Tottenham and Southampton.

Though Malaga are eager to keep Sandro at La Rosaleda Stadium, and the striker has previously committed his future to the club, they have “more or less assumed” he will leave.

Whether AS are to be believed remains to be seen, but Sandro would certainly be an interesting target for Liverpool.

Sandro has become a firm favourite since joining Malaga on a free transfer last summer, and has scored 14 goals in 27 games in all competitions so far this season.

Five of these have come in his last five Liga games, including in a 2-0 win over his former side at the beginning of April.

Primarily a centre-forward, Sandro is also able to operate on either wing, and came up through the ranks at Barcelona’s fabled La Masia academy.

Quick, technically gifted and with an eye for goal, Sandro would provide Liverpool with another reliable presence in the final third, as well as a major threat from set-pieces.

Having been brought up at Barcelona, making 32 appearances for his former club, Sandro is capable of performing in a side who enjoys the majority of the possession.

Furthermore, his season fighting in the bottom half of La Liga with Malaga has given him more much-needed experience.

For £5 million, Sandro would be a bargain signing this summer, and could interchange with the likes of Origi, Firmino, Sadio Mane and Philippe Coutinho as another invaluable option.