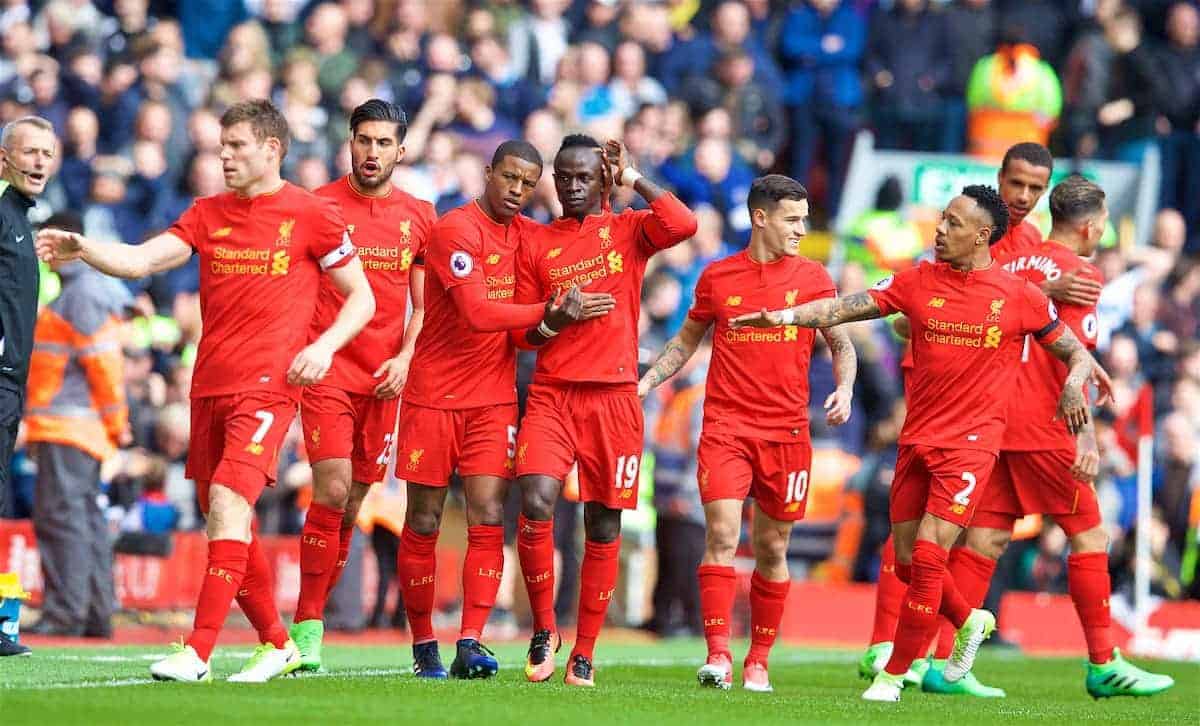 The media felt Liverpool were superior all over the pitch to Everton and heaped praise on Philippe Coutinho for inspiring the Reds to Merseyside derby victory.

The Reds delivered another delightful derby-day domination as Jurgen Klopp’s side breezed past the Blues at Anfield.

Stunning solo efforts from Sadio Mane and Philippe Coutinho either side of Matthew Pennington’s equaliser all in the opening 31 minutes handed Klopp’s men a deserved half-time lead.

Substitute Divock Origi then wrapped up victory on the hour-mark with a clinical finish in front of the ecstatic Kop, deflating the Toffees who simply had no response to breaking the Reds’ dominance.

Klopp showed his delight at the display and result in post-match celebrations with his team on the pitch, but he will hope the win doesn’t come at too heavy a price with worrying injuries for Mane and the outstanding Emre Can.

It was a huge three points for the Reds and the perfect result to mark the passing of club legend Ronnie Moran.

Here is how the media assessed a fantastic afternoon.

The media felt Liverpool were worthy winners despite not being at their best at Anfield, and feel the result has placed the Reds in a strong position in the race for Champions League football. For JOE.co.uk, Tony Barrett felt the Reds won comfortably and were always “one step ahead” of the Blues:

Besides Matthew Pennington’s equalising goal in front of the Kop, there were seldom moments when Liverpool did not seem at least one step ahead of Everton.

It always looked that they had an extra gear to go to and more weaknesses to exploit, a situation which allowed them to play sporadically throughout in the knowledge that doing so would be enough.

Richard Jolly, for The Express, labelled Liverpool “specialists” on the big occasions:

Liverpool are up to third, having shown they are the specialists on the big stage. They do not face any of the top seven again this season. They have not lost to any of them. It is a remarkable record.

Simon Hughes, for the Independent, feels Klopp’s team “should qualify” for the Champions League:

Everton were not well-beaten here but they were beaten deservedly by a Liverpool team that in theory, should qualify for Champions League when you weigh up their current position in the league and the opponents they must face between now and the end of the season.

The Liverpool Echo’s James Pearce thought the result and performance was the perfect to honour Anfield legend Ronnie Moran:

This wasn’t a day for angry recriminations, it was a time for Kopites to bask in the glow of a performance brimming with desire and commitment in all departments.

How better to honour the memory of the great Ronnie Moran.

Reporters discussed where the tactical battle was won and lost at Anfield, with numerous journalists feeling Ronald Koeman got his tactics wrong and Liverpool’s superior quality shone through. The Dutchman is rarely cowed and his open approach attempted to take the initiative away from the hosts. But it was perhaps too bold. It allowed Klopp’s front three the opportunity to play.

When Mane, Firmino and Courtino are left in their comfort zone, Liverpool generally come out on top. It was no different here.

Everton‘s players ran as if they had lead in their legs and their passing was shocking; the 3-5-2 system Koeman devised in an attempt to thwart Liverpool was easily bypassed and, from back to front, there were second best throughout. The Telegraph’s Jonathan Liew thought Everton afforded the Reds too much time and space to build from the back:

Everton allowed Liverpool far too much space to play in their own half. And by the time Mane, Philippe Coutinho and Roberto Firmino start running at you, it is often too late.

Everton failed to funnel their aggression properly and their young squad couldn’t compete with Liverpool’s quality, especially in the attacking third.

Barrett noted how Liverpool simply dominated Everton all over the park:

With Coutinho in this form, all that is required of his team mates is that they do the basics and in the event those in red were all superior to their opposite numbers in blue.

The Independent’s Mark Critchley made an interesting point on how the Reds’ midfield balance improved without Adam Lallana:

If anything, the absence of Liverpool’s most dynamic force left them with a little more mettle, composure and balance in midfield.

Lallana will return when fit, as he should, but Liverpool’s display here showed the benefits of being a little more reserved in the middle of the park.

After witnessing a pleasing team performance littered with accomplished individual displays, reporters offered verdicts on who shone at Anfield, with plenty of praise reserved for Coutinho. Such was the Brazilian’s dominance, Jolly felt the game will be remembered as the ‘Coutinho derby’:

For Liverpool, it could be branded ‘the Philippe Coutinho derby’, a game determined by its silkiest player, one which underlined the balance of power on Merseyside and put nine points between the teams.

Barrett was among the many journalists who felt Coutinho out-shone Blues counterpart Ross Barkley:

Philippe Coutinho’s one-sided duel with Ross Barkley in the second half might not have decided the 228th Merseyside derby but it did define it. In a single incident, the gulf in quality and execution of skill that allowed Liverpool to win with routine ease was encapsulated and personified.

Critchley noted how some good came from the international break for once, with Coutinho benefitting from time with Brazil before replicating his form at Anfield:

Coutinho left to play for his country’s World Cup qualifiers in a rut, struggling as he returned from that sickening ankle injury, but the change of scenery did him good.

Improved displays in Brazil’s wins over Uruguay and Paraguay were followed by a true return to form here, and you wonder whether a brief break away from the rigours of the Premier League was what he needed all along.

Reddy feels the timing of Coutinho’s return to form is crucial, with several key men out injured:

It was not just the perfect fixture for Coutinho to dust off the rust and put his cape back on, but a crucial period too given the injuries to Adam Lallana, Jordan Henderson and the concern over Mane. Elsewhere, the Mirror’s Alex Richards believes Klopp’s side looked much better defensively with Dejan Lovren and Joel Matip as the centre-back partnership:

For all his detractors, Liverpool look a far better side when Dejan Lovren and Joel Matip are in tandem at the heart of defence.

The duo communicate in German when together and Matip – who has been an outstanding pick up on a free transfer – brings the best out of the Croatian.

What a bonus it would be for Klopp if Origi can keep that mojo to the end of the season, especially if Mane’s injury proves anything other than minor.

Lucas was immense as he thundered into tackles, won his aerial battles and kept Liverpool on the front foot. He epitomised the kind of controlled aggression that Klopp had demanded.

Lucas clearly relished every second of it – how glad he must be that he spurned Inter Milan’s advances back in January. Whatever the future holds for him this summer, he richly deserves an Anfield testimonial.

Had another quality performance after his excellent game in the draw with Manchester City a fortnight ago. Is still capable of the odd reckless lapse, but did more than enough to compensate here. Took the fight to Everton every chance he got.