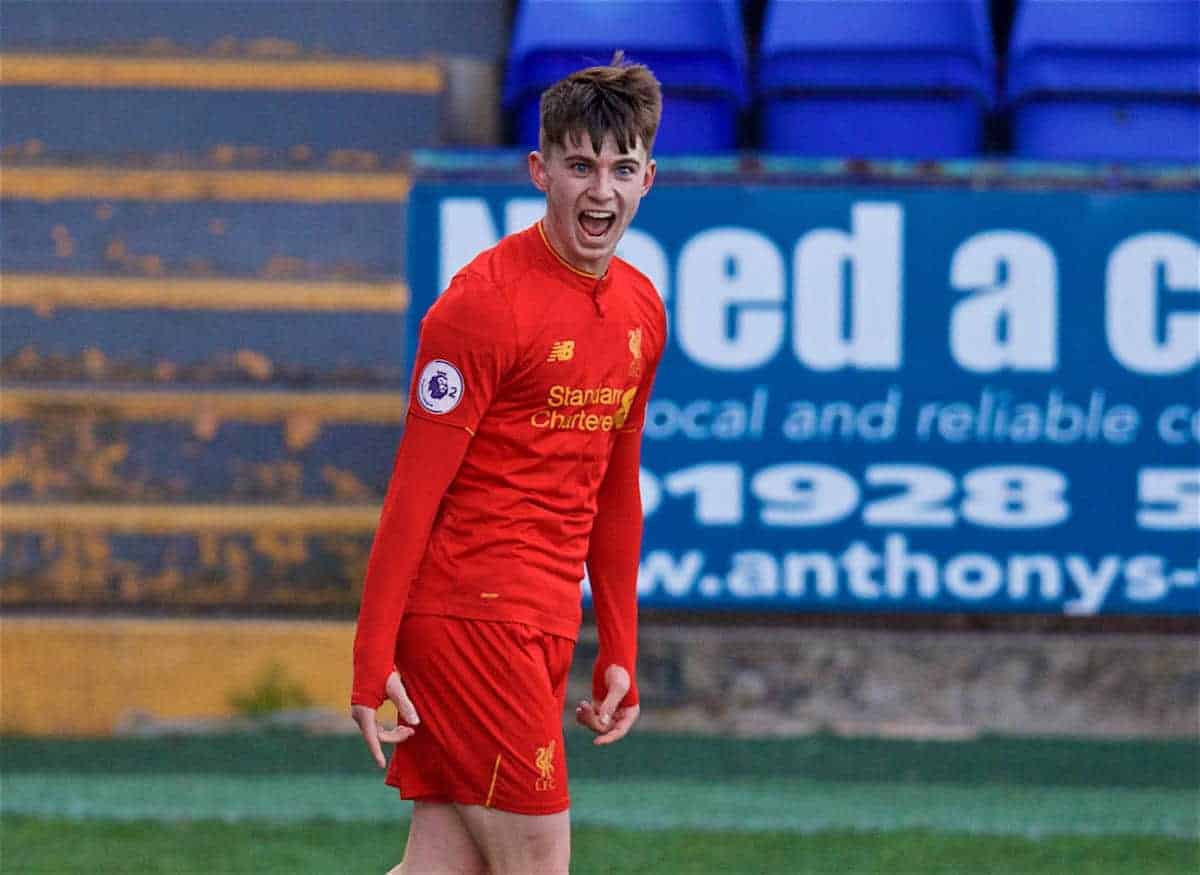 Victory for third-placed Liverpool would narrow the gap on City to two points, with Everton leading the way in Premier League 2. Anything other than a City win would hand the title to the Reds’ Merseyside rivals.

It was a strong-looking Liverpool starting lineup, with the teenage quartet of Joe Gomez, Trent Alexander-Arnold, Rhian Brewster and Woodburn all included, despite being in the senior squad against Crystal Palace on Sunday.

There was no Kevin Stewart in the middle of the park, but Marko Grujic started proceedings, as well as Sheyi Ojo, Harry Wilson and Ovie Ejaria, who returned after two months out.

Ojo almost got on the end of an inviting Woodburn cross early on, while Isaac Buckley-Ricketts fired over with the goal gaping at the other end.

The lively Brewster saw an effort deflected wide, Nat Phillips was denied and Woodburn hit the crossbar, as the Reds’ early dominance continued.

City were awarded a penalty in the 19th minute, however, following a foul on Buckley-Ricketts by Alexander-Arnold. Paolo Fernandes squeezed his spot-kick past Kamil Grabara.

Ojo was desperately unlucky not to equalise soon after, with the winger firing an unstoppable strike against the post.

Liverpool were deservedly level with 26 minutes on the clock, as Alexander-Arnold found Woodburn, and the 17-year-old finished well from a slight angle.

Grabara made two excellent stops to deny Buckley-Ricketts before half-time, outlining why the goalkeeper is so highly thought of at the academy.

Wilson almost squeezed a free-kick into the near post, in what was the final action of an entertaining first-half. Brewster volleyed wide soon after the restart, following a lovely cross by the classy Woodburn, and Thierry Ambrose was thwarted by Grabara.

The Liverpool striker then somehow missed from close-range – a chance you would have backed him to gobble up in his sleep. Meanwhile, Tosin Adarabioyo missed a great chance to put City ahead from six yards out.

Angus Gunn kept out Brewster’s strike to keep the scores level, and the City ‘keeper also denied Ojo after a good run by the 19-year-old.

With 18 minutes remaining, Liverpool were ahead. Brewster found Woodburn, and the Welshman found the net to register his second of the night.

The outstanding Grabara made a huge double save to keep out Ambrose, after Grujic lost the ball cheaply in a dangerous area, but City were soon level. Buckley-Ricketts pounced from a corner, after some set-piece defending as bad as Liverpool’s on Sunday.

Gunn made a fabulous stop to prevent Connor Randall from curling home a late winner, while City nearly snatched it after Buckley-Ricketts hit the post.

Grujic and Alexander-Arnold also came close, and Gomez made a sensational headed clearance off his own line in the dying seconds.

Liverpool snatched victory in the dying seconds, with Virtue pounding after Brewster had failed to convert Woodburn’s cross.

It was a great end to a superb contest, although the Reds’ win did hand Everton the Premier League 2 title. The two sides face each other at Goodison Park in a fortnight. Next Match: Everton – (away, Monday 8th May)