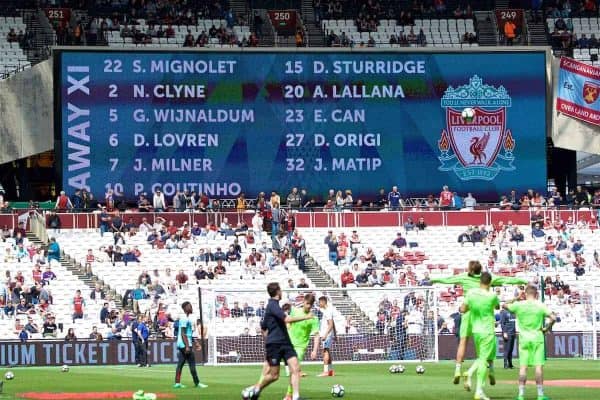 Jurgen Klopp could deploy an unchanged setup for Sunday’s make-or-break clash with Middlesbrough, as he seeks to seal a top-four finish.

Liverpool take to Anfield for the final time this season looking to put the icing on the cake of a positive campaign with Champions League qualification.

One more priceless win against relegated Boro will secure a top-four spot, and after producing a superb display at West Ham to keep control of the race, one last big effort from all at Anfield is needed to get over the line.

Klopp has a strong squad at his disposal, which could be boosted further if Roberto Firmino returns.

But the boss is facing a big call over whether to alter a confident and winning team for the season-defining game.

Having seen his tactical switches inspire the Reds’ most complete performance and result in weeks at West Ham, Klopp could deploy the same again at Anfield.

‘If it ain’t broke, don’t fix it’ as the saying goes, and there seems little reason to change something that worked so perfectly last time out.

Arguably the only reason for change is if Firmino is passed fit, with the influential Brazilian an even better option than Origi to partner Sturridge up top.

However, the level of confidence the side will have gained from last week’s win, and Firmino’s lack of team training this week, makes naming the same team—keeping the Brazilian as a go-to sub—the best move.

A third straight clean sheet will have worked wonders for Simon Mignolet and the back line, while having Coutinho’s creativity deeper and Adam Lallana’s energy advanced sparked the attack back to life.

And with Sturridge and Origi having rediscovered goalscoring form, the pair will be desperate to build on that by firing the unchanged Reds to a defining three points.

Though the switches worked better than even Klopp could have imagined at the London Stadium, the inspired formation change ultimately came due to personnel (un)available.

Come Sunday though, Klopp will have Lucas and possibly a fully recovered Firmino back—and the extra flexibility provided by the latter’s return in particular offers the chance to revert to 4-3-3.

Switching back could be deemed risky, or even needless, given last week’s display—and especially considering how Liverpool were much more comfortable in a shape non-reliant on wide threat.

But it’s ultimately what has taken us to the brink of a top-four finish, and with the players available, it would be understandable if Klopp reverted.

It would mean Coutinho moves back to his left-sided role, with Firmino being restored to the right, leaving Klopp a big decision over who leads the line.

But Sturridge should be given the nod over Origi, having shone on his return and with his superior clinical finishing essential for a must-win game.

Behind the gifted front three, Lallana, Emre Can and Gini Wijnaldum would form an industrious and creative midfield trio, with the German deepest to protect an unchanged defence.

The return to a familiar system would see this XI start the defining game.

The Reds are just 90 minutes away from securing a Champions League return, and Klopp’s men must hold their nerve to claim the vital victory needed to bring those special European nights back to Anfield.