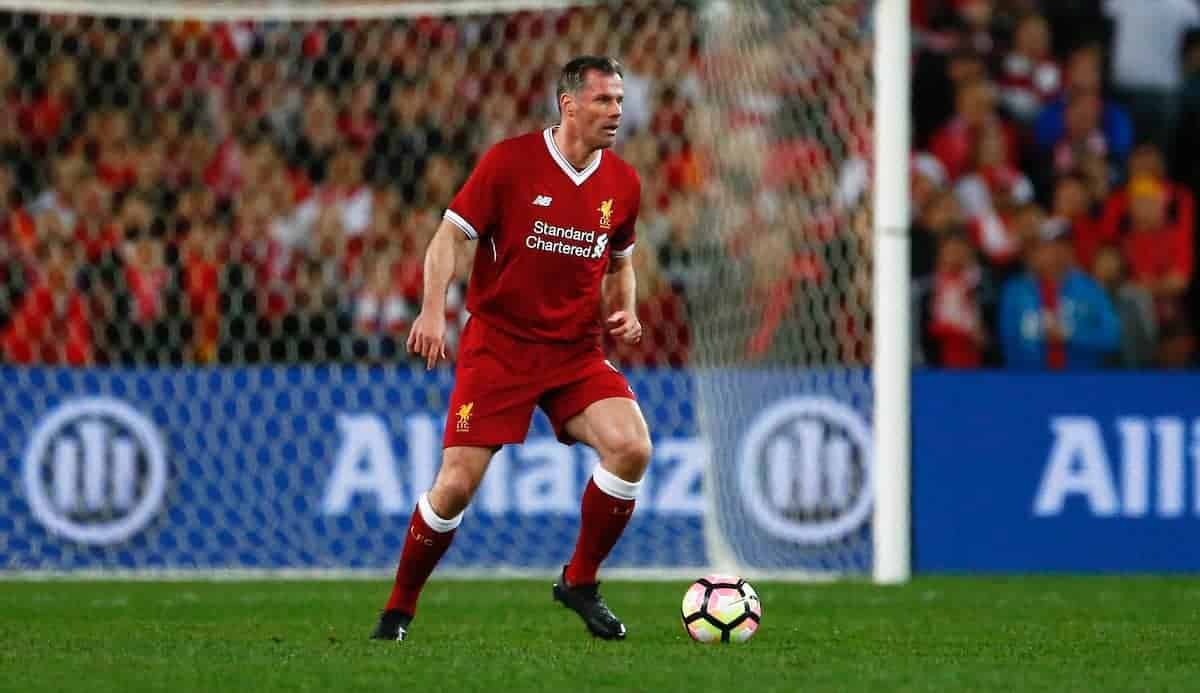 Since retiring in 2013, Carragher has gone from strength to strength on Sky Sports, becoming one of the country’s most popular pundits and columnists.

The former defender is never one to hide his true feelings or suffer fools gladly, and subsequently, his opinions will upset many along the way.

One of those to have taken offence is Sturridge, after Carragher made it clear that he feels Liverpool should sell the striker this summer.

The 39-year-old has opened up about the words the two had out in Australia last month, giving a candid account of exactly what was said.

“I’ve got a funny story about that, and I didn’t mind it actually – I was happy about it,” Carragher told Anfield Extra.

“As soon as I got on the plane, I could see Sturridge wasn’t his normal self with me. And he pulled me in Australia after the game, or at half time when we’d come off.

“He said ‘why did you say they should sell me?’. “I said ‘ooh, fair enough!’ I thought ‘I’m not having you putting me on the back foot’ so I went straight back and said ‘well, what else can they do?!’

“He wasn’t too happy that I’d said that, but my point was that a player of his quality, you either play or you go. If I was him, I wouldn’t want to be on the bench, and from Klopp’s point of view there is nobody else on the bench he could get money for, if he needed say £20m or £25m.

“Listen, you could still keep him. If Daniel Sturridge is happy playing 25 games next season, you are not going to get many sub strikers with his quality.

“But to be honest I’d seen Slaven Bilic speak about him towards the end of the season, so I thought ‘oh, he’ll end up at a West Ham or somewhere’. But you see his quality, it’s difficult to go and buy a striker with that.”

Carragher also stood up for his former teammate, but while he feels he has often been harshly treated for an apparent poor attitude, he stood firm on his thoughts on Sturridge’s future.

“I was happy he said it. It’s fair enough; we give stick out, and plenty of praise too, so who are we to say that someone can’t have an opinion on us?” he added.

“He didn’t come across like a player who was looking to get out, I have to say that! I played with him. He’s always had that thing about him that he’s moody or difficult. I never saw it.

“He was quiet, but no different to a lot of other players. The big thing was getting him on the training pitch every day. It’s well-documented that he’s got to be 100 per cent and that he’s fearing his body is going to let him down.

“But as soon as you get him on the pitch, you can tell straight away. You can just tell with the way he controls the ball, the way he moves, you know you’ve signed a good player.

“When he first came, he could work the channels with his pace and power. I just don’t see him do that now. I remember in the final in Basel late on, he chased a ball in the corner and a defender just ran past him.

“He maybe can’t do it, or he’s looking after an injury. But what he can still do is be electric around the box. You think of Defoe, what he’s done the last three or four years.

“He doesn’t run everywhere but he’s still electric in the box, and that’s what Sturridge will still have; quick feet in the box, get a shot off quick, be sharp, he’ll always have that.”

The coming weeks and months will determine the next chapter of Sturridge’s career, and Jurgen Klopp has a difficult decision to make on the matter.

In terms of natural ability, the 27-year-old is arguably the Reds’ best player, but constant injury problems and a lack of certain attributes in the manager’s system work against him.

Selling a player of Sturridge’s brilliance is certainly a risk, but if Klopp does decide he is surplus to requirements, you could understand why.