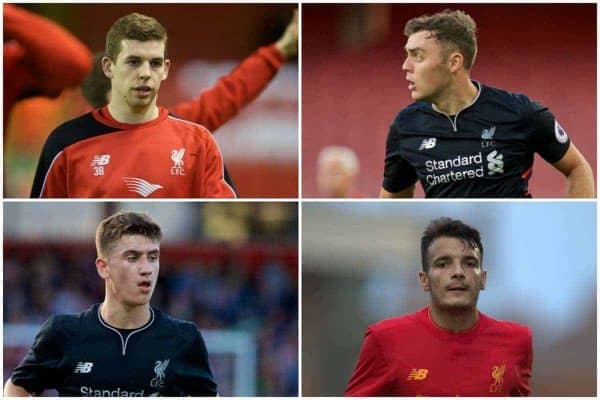 Flanagan, Brannagan and Chirivella all spent much of last season away from the club on loan at Burnley, Fleetwood Town and Go Ahead Eagles, respectively.

Meanwhile, Randall remained on Merseyside, but only made one 45-minute senior outing against Wolves in the FA Cup, as well as two other appearances on the substitutes’ bench.

With Jurgen Klopp set to overhaul his squad following last season’s fourth-placed finish, a host of players are set to leave.

Along with the likes of Mamadou Sakho, Alberto Moreno and Lucas Leiva, the academy quartet are expected to move on in search of regular first-team football.

It’s hardly a surprise then that the Liverpool Echo‘s James Pearce has suggested they will leave after dropping down the pecking order in Klopp’s second season with the club.

All four featured sporadically under the German in 2015/16, making 26 appearances between them, but are now reaching an age where they require a regular role in order to progress.

Flanagan turned 24 on the turn of the year, while Randall will be 22 in October, Brannagan hit 21 last month and Chirivella is a year younger than his midfield colleague.

Chirivella seems the most likely to have a future on Merseyside, having impressed in his 17 appearances for Go Ahead Eagles last season, scoring twice and assisting twice.

The Spaniard took up a deep-lying creative role in the Eredivisie side’s midfield, though he failed to steer them away from relegation, finishing 18th in the Dutch top flight.

Klopp is looking to add to his ranks in the middle of the park, with RB Leipzig’s Naby Keita his primary target and Arsenal‘s versatile Alex Oxlade-Chamberlain also on the radar.

But Chirivella, who made his Premier League debut under Klopp away to Swansea City last season, could still provide Klopp with another option.

A cultured player with a strong awareness and good eye for a pass, Chirivella could serve as an alternative to the likes of Georginio Wijnaldum and Adam Lallana.

However, he is lacking in the physical department, and while he boasts a high work rate, would need to complement this with an improved strength and heightened aggression.

Flanagan made 10 appearances for Burnley last season, and may need to drop down to the Championship this summer, while Brannagan and Randall are likely to do similar if they leave.

Brannagan has interested League One side Wigan Athletic in the past, while both Barnsley and Preston North End have been linked with Randall.