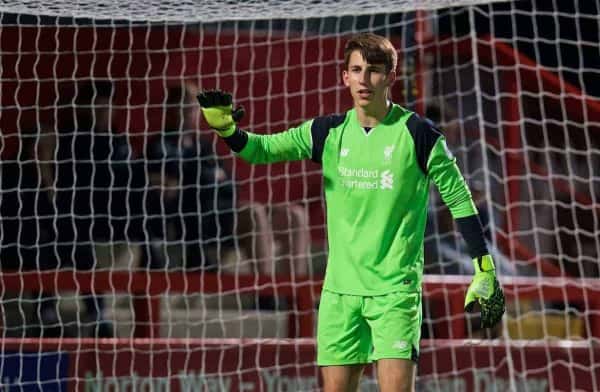 Liverpool goalkeepers Shamal George and Kamil Grabara could leave the club on loan this summer, while George is set to undergo individual training.

The Reds have a host of impressive young stoppers on their books, having acquired some promising talents in recent years.

Along with George and Grabara, Caoimhin Kelleher, Andy Firth, Ben Williams and Dan Atherton are also making progress at Kirkby, dividing their time between the U23s and U18s.

Ryan Fulton will also return from a loan spell with Chesterfield this summer, while Danny Ward is set to join Simon Mignolet and Loris Karius as Jurgen Klopp‘s senior options for 2017/18.

With 10 distinguished goalkeepers on their books from the U18s to the senior squad, there is likely to be a shakeup this summer.

And according to the Liverpool Echo, both George and Grabara are being considered for potential loan moves to spur their development for the future.

Grabara, who joined the Reds from Ruch Chorzow for an initial £250,000 last summer, is reportedly the most likely to leave on a temporary basis.

The Polish goalkeeper rose to the fore following a host of strong performances last season, and often travelled with the first team as part of Klopp’s matchday squad.

But George may also benefit from a spell away from Merseyside, after a series of injuries hampered his progress throughout last season.

The 19-year-old was included as part of Klopp’s squad for Liverpool’s pre-season tour of the United States last summer, and even made an unlikely appearance up front against Huddersfield Town.

Clearly making a mark on his manager, it was disappointing to see George’s progress stall, and goalkeeping coach John Achterberg has urged him to become “more robust” ahead of 2017/18.

“Shamal knows what he has to do. I’ve had a lot of talks with him on it,” he said.

“He was injured a lot last season and missed a lot of football. As a goalie, you need to try to stay fit and help yourself to stay fit.

“The plan for him is to improve his strength and be more robust. The hope is that he doesn’t get those small injuries and can cope with the physicality.

“He’s still a young boy so he has time. He has to help himself to improve from that side of things.”

Spending the summer in the gym and on the training field will certainly aid George in that respect, but a season with a League One or Two side would spur him further.

Liverpool are yet to finalise any loan deals this summer, but Sheyi Ojo, Joe Gomez, Taiwo Awoniyi and Allan Rodrigues are among those who could leave.