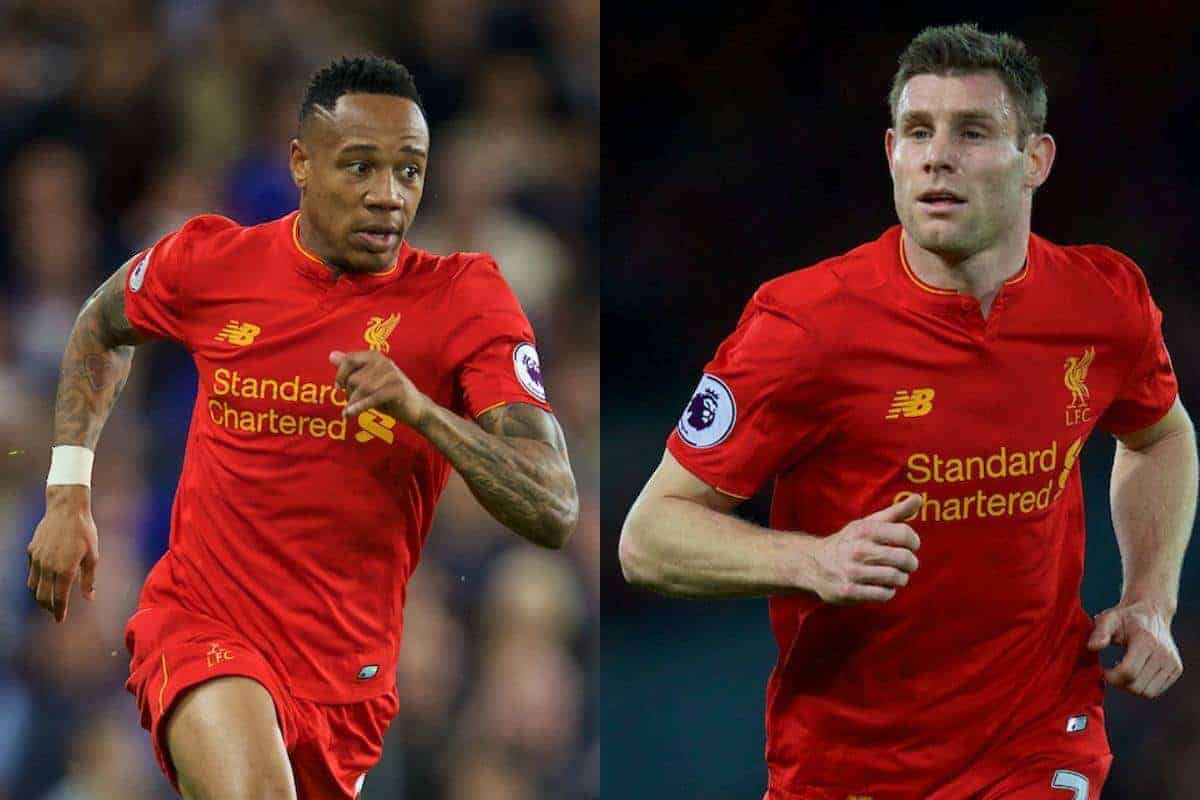 Liverpool’s full backs were blamed for some of the team’s blunt attacking play last season and the club can look to solve this problem from within and without this summer.

In recent seasons full backs have proved vital to the sides who claim football’s top honours.

From the technical prowess of the unmatched Philipp Lahm at Bayern Munich, to the unbridled attacking of Monaco’s Benjamin Mendy, most successful teams have at least one standout full-back.

In 2017 the clubs who won the major trophies on British soil — which this time around included the Champions League — contained some of the best full backs or full-back performances on the continent.

A team’s intent and ambition can be embodied in the quality and style of its lateral players, and those who emerge from defence into attack can be the most potent weapons.

Liverpool’s current pair are solid and are regularly said to be able to ‘do a job’, but rarely do anything outstanding in either defence or attack, which needs to change. Fans had longed for a right-back such as Nathaniel Clyne who offers regular six or seven out of ten performances in the position, but the way the game has progressed this is no longer enough.

The full back needs to be either excellent at defending or creative and productive going forward, with the player on the other side providing the balance depending on the opponent.

One of the best uses of full-backs in recent memory was the Barcelona side which contained defensive left-back Eric Abidal, and marauding right-sided attacker Dani Alves who helped Lionel Messi blossom into the best player of all time.

Abidal may not have been the best individual in the side, but his style allowed Andres Iniesta to flourish in front of him and gave Alves complete freedom down the right.

A solid defensive full back liberates others, while a specialist attacking wing-back can be a team’s most useful attacking weapon. Liverpool have neither.

While Finnan was solid defensively, he also notched up a handful of assists, but Johnson’s replacement Clyne has just two league assists in two seasons and isn’t as defensively solid as Finnan.

It’s only in hindsight that there’s a realisation that the Irishman was more of a regular eight out of ten player rather than anything lower, even though he was helped somewhat by the Benitez system, but the solidity offered by the current right-back lies in the fact he’s alright at everything but not outstanding in either defence or attack.

If it wasn’t for the impressive Trent Alexander-Arnold coming through from the youth ranks, Liverpool should be looking at strengthening the position, but the 18-year-old local lad should be given every chance to succeed Clyne in the No 2 spot.

On the other side of the pitch, the situation is more critical. Klopp doesn’t fancy Alberto Moreno at all, and James Milner’s performances in the position have steadily declined after a brief purple patch towards the end of 2016.

There is no remedy to Liverpool’s left-back ills within the current squad – unless Spanish U23 player Juanma is fast tracked to the first team next season.

Moreno may have worked in certain situations where the team otherwise lacked natural width and pace, but it became obvious that Klopp’s trust in him was non-existent.

This means that the club should be as active in the transfer market for a left back, as they are for a winger and a centre-back.

The German manager obviously believes that full-back is one of the most important positions on the pitch, and this may explain why he’s been picky when it comes to recruiting the right player.

Signing a player in a position which seems threadbare just for the sake of signing one doesn’t seem to be part of Klopp’s mindset, and his use of Milner indicates that he’d rather adapt what he has than rush to sign a player he thinks can’t cut it long term.

Like Pep Guardiola, Klopp is of the belief that full backs now need to have more to the game than just workrate, stamina, athleticism, and a speed.

“This kind of full-back now is much more of a midfield player,” Klopp told Sky Sports in September 2016.

“The kind of football they play, in halfspaces, they are the other winger sometimes, the central midfielder sometimes.

“The rule is: be an option, get the pass or be available for other players.”

Liverpool in attack with the right back drifting into midfield This style has been evident during his first full season in charge at Liverpool, even though the players carrying out this plan haven’t always been successful.

Towards the end of the season, when the German manager entered “win ugly” mode, one full back would always look to hang back if the other one was attacking the opposition area.

Liverpool attacking with one full back overlapping, and another holding a defensive position They were operating on three different planes. The overlap, the extra midfielder, or the defensive insurance.

The theory should work, but the players involved didn’t quite have the quality to carry it out well enough to affect the game, especially in attack. The pair rarely found the byline, and their involvement in the midfield passing triangles was often sloppy.

The last game of the 2016/17 European club season was a prime example of full back play.

Cristiano Ronaldo may take the plaudits for Real Madrid’s European Cup triumph, but their full backs Dani Carvajal and Marcelo played vital roles in three of the four goals they scored.

Carvajal gets the direct assist for Ronaldo’s first – courtesy of a quick passing move which recalled the Messi-Alves combo – and also played a key part in the Portuguese’s second, playing Modric through towards the byline from where he could produce the cross.

The once mercurial Marcelo is ageing well and becoming more disciplined, as shown with his position for the Casemiro goal, but for the fourth and final goal his quick-thinking attacking play down the left-hand side was key. All the way back to his swift throw-in prior to the free kick which eventually led to the goal, to his assist for the goal itself.

Juventus left back Alex Sandro’s one touch cross in the move which led to Mario Mandzukic’s wondergoal was also a highlight. The other team which triumphed in Britain this season were Antonio Conte’s Chelsea.

Their 2017 title winning side have prime examples of both types of full back, and they’re the best around at what they do.

Marcos Alonso was the best attacking wing-back in the league, and was a key part of Antonio Conte’s system once he switched to a 3-4-3.

On the other side of the pitch Cesar Azpilicueta was babysitting David Luiz, while also helping out Victor Moses who was inexperienced when it came to the wing-back role he was asked to play.

Azpilicueta is an excellent and rare example of a defensive full-back in the modern game. His role as a wide right sided defender harked back to the days of the original No. 2 position which would be the first outfield player named on a teamsheet, such were their defensive responsibilities.

His style recalls former Liverpool defender Alvaro Arbeloa, who Jose Mourinho referred to as one of the key components in his Real Madrid side.

“For Arbeloa, I only have my words of gratitude. In my 16 years as a coach I have him in my podium of the most important players of whom I’ve worked with. A good player and an exceptional man.”

The Chelsea pair were overlooked in the PFA Team of the Year in favour of Spurs’ English duo Kyle Walker and Danny Rose, while the team-mates whose performances they enhanced — Luiz and Gary Cahill — were both present.

If Liverpool are to reach these heights they need to solve the left back issue and make sure Alexander-Arnold’s talent isn’t wasted due to a lack of game time at the top level.

This should mean that he plays ahead of Clyne in some games, and in his several outings last season he proved he’s more than good enough to deputise for the current incumbent and eventually replace him as first choice.

Klopp will continue to give his full backs prominent roles in the side, and the recruitment team will have taken this into account when looking at the players the club will negotiate with in the coming months.

The success of this player targeting and subsequent talks could prove vital to the progress of the club in its ongoing quest for its first trophy under the German manager.