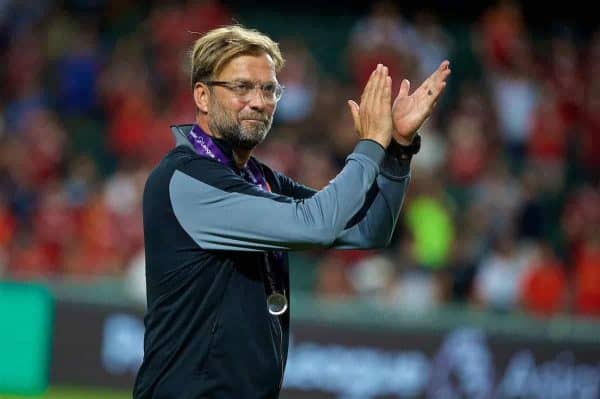 What can we learn from Liverpool’s 30-man Germany training camp squad?

Jurgen Klopp has named a 30-man squad for Liverpool’s pre-season training camp in Germany, giving an insight into his plans for the new campaign.

The Reds flew to Bavaria on Wednesday, and are set to train in the town of Rottach-Egern, 35 miles outside of Munich.

Taking in clashes with Hertha Berlin, Bayern Munich and one of Atletico Madrid or Napoli, Liverpool’s tour of Germany provides them with a sterner test ahead of 2017/18.

With just one further pre-season clash on their return, against Athletic Bilbao in Dublin, preparations in Klopp’s homeland will likely be the most formative.

So what can we learn from the 50-year-old’s squad in Germany?

No Futures For Youth Trio?

Pre-season is a liminal period for many players, as they seek to establish themselves at their current club or, as is often the case, secure a move away.

The restrictions on Klopp’s squad for the Premier League Asia Trophy in Hong Kong ensured some ambiguity, however, with the German only able to take 25 players with him to the Far East.

But for Connor Randall, Pedro Chirivella and Harry Wilson in particular, their subsequent omission from Klopp’s touring squad for Germany suggests the writing is on the wall.

Randall can have been expected to depart after playing no part in either of the Reds’ domestic friendlies, but Chirivella had impressed and Wilson’s strong campaign for the U23s in 2016/17 suggested he could secure a first-team role.

Chirivella has already joined Willem II on loan, and Randall and Wilson are likely to follow suit. The latter would be worth keeping, but he desperately needs a loan for his development.

Another fringe player likely to move on at some stage in the transfer window is Jon Flanagan, but for now, the 24-year-old remains part of Klopp’s squad.

Flanagan’s versatility ensures he is useful cover at both right-back and left-back, and with both Nathaniel Clyne and James Milner carrying injuries, he is required to travel.

This is unlikely to be a beneficial move for the defender, as he finds himself in limbo with under three weeks to go until the start of the season.

Alberto Moreno finds himself in a similar situation, with Liverpool open to offers for the Spaniard having signed Andrew Robertson from Hull City earlier in July.

Clyne, Milner, Robertson, Trent Alexander-Arnold will be Klopp’s primary options at full-back this season, while Joe Gomez is able to deputise on either flank, too.

An Opening For Ejaria

Having returned from England’s triumphant run at the U20 World Cup, Ovie Ejaria reported to Melwood struggling for fitness.

The midfielder is yet to feature for the Reds this pre-season, and didn’t travel to Hong Kong, but his inclusion on the flight to Germany is encouraging.

Ejaria said he was “training with a smile” on Tuesday, and the 19-year-old will now be hoping to reclaim his role as pre-season continues.

With Liverpool so far failing in their attempts to sign Naby Keita from RB Leipzig, there is an opportunity for some of Klopp’s young midfielders, and Ejaria will likely be vying with Marko Grujic.

Given the opening in Germany, he can look to impress Klopp ahead of 2017/18.

Beyond those young players whose futures have become clearer on Klopp’s selection, the German’s 30-man squad provided more clarity over imminent moves.

Adam Bogdan has been overlooked again, as Simon Mignolet, Loris Karius, Danny Ward and Kamil Grabara all travelled, with the Hungarian expected to join Nottingham Forest.

Meanwhile, Mamadou Sakho remains in the cold, with Crystal Palace interested, and Lazar Markovic has travelled to Italy to discuss a possible £16 million move to Fiorentina.

Having not made the trip to Hong Kong, Sheyi Ojo is also left out, with the winger mulling over a loan move to one of Fulham, Derby County, Middlesbrough or Aston Villa.

Ryan Kent is also expected to leave on loan, with Leeds United and Hull City both having offers accepted, but his continued inclusion does suggest he could still play his way into a Reds role.

With Klopp preparing to finalise his squad for the upcoming campaign, his group for the trip to Germany highlighted one clear strength: Liverpool’s attacking talent.

Klopp has so far been unable to field his likely first-choice forward line for 2017/18, but Germany should see Mane and Salah flanking Firmino for the first time, with Coutinho in support.

That this leaves a host of hugely talented attackers is reserve is a testament to the Reds’ strength in depth.

There is still work to do in the transfer window, but Klopp’s 30-man group is certainly one capable of challenging in the Premier League and Europe next season.

The Reds remain interested in both Keita and Virgil van Dijk this summer, though getting those deals across the line could prove difficult.

If one, or both, end up in a Liverpool shirt in 2017/18, however, Klopp will have one of the strongest squads in England.

The 30 players heading to Germany highlight the quality in Klopp’s first-choice selection, as well as a host of more-then-capable deputies and blossoming youngsters.

Clashes with Hertha, Bayern and Atletico or Napoli can continue to showcase this.