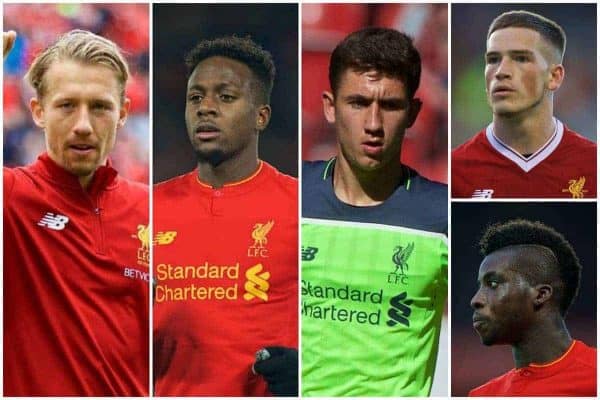 We bring you the latest Liverpool transfer news and rumours on Monday, as the Reds’ current longest-serving player nears the Anfield exit.

Jurgen Klopp and his side have travelled to Hong Kong as they continue pre-season with two clashes in the Premier League Asia Trophy, starting against Crystal Palace on Wednesday.

With the German only able to name a 25-man squad for the trip, along with youth goalkeeper Kamil Grabara, a host of big names have stayed behind.

So what does the future hold for those cast-offs? Here’s the latest from the rumour mill.

Lazio approached Liverpool with an £5 million offer for Lucas Leiva on Friday, and having been left out of the Reds’ 1-1 friendly draw with Wigan Athletic, things have developed swiftly.

The 30-year-old arrived in Rome on Sunday, to a rapturous reception from Lazio supporters, and has now undergone his medical with the Serie A side.

Lucas was pictured during his routine tests on Monday morning, and is now expected to finalise his departure from Merseyside imminently, 10 years after joining from Gremio.

This comes as a bittersweet move for the Brazilian, who arrived as a young midfielder in 2007 and built a strong affinity with the Anfield support.

But with Klopp chasing a deal for one of the Bundesliga’s standout talents, his opportunities would be limited if he stayed.

Speaking ahead of Liverpool’s trip to the Far East, Klopp admitted that he was forced to remain patient in the summer market, saying “it is always complicated.”

This is no doubt magnified by RB Leipzig’s public stance over priority Reds target Naby Keita.

The Bundesliga side hammered this home again on Monday, according to ESPN‘s Raphael Honigstein, who quotes a club source as stressing: “We will not enter into negotiations at all.”

Liverpool have already seen a £57 million bid for the 22-year-old rejected, but are expected to return with an improved offer later this week.

It seems that there is a lot to be read between the lines at the Red Bull Arena, with This is Anfield’s Chris Williams reporting on Saturday that fractures are appearing in Leipzig’s resolve.

Fenerbahce ‘Priced Out’ of Origi Deal

Following the arrival of Dominic Solanke from Chelsea this summer, the role of Divock Origi has come into question, with the Belgian now potentially Klopp’s fourth-choice striker.

Speaking last week, however, the 22-year-old said he was “very ambitious” with his targets for the upcoming campaign, relishing the challenge ahead.

And if reports in Turkey are to be believed, Origi remains an important part of Klopp’s plans moving forward.

Fotospor claim that Super Lig side Fenerbahce were interested in bringing Origi to the Sukru Saracoglu Stadium, but were priced out of a move by Liverpool.

They suggest they have since turned their attention to Chelsea‘s out-of-favour Loic Remy, who came close to joining the Reds in 2014.

While the likes of Pedro Chirivella, Ryan Kent and Sheyi Ojo have been given game time throughout pre-season so far, one youngster who remains on the fringes is Cameron Brannagan.

The 21-year-old returned from a loan spell with Fleetwood Town this summer and has been training with the Liverpool U23s, scoring the winner in their opening pre-season friendly at Rhyl FC.

According to the Independent, Brannagan’s peripheral role has stemmed from a contract dispute with the Reds that could see him sold this summer.

They claim that Liverpool are unwilling to loan Brannagan out unless he agrees an extension to his current deal, which expires in 2018, prompting speculation over a permanent move.

Hull City, Derby Country and Stoke City are all said to be interested in the technical midfielder.

While he has travelled with the Reds to Hong Kong, there remain question marks over the future of Ryan Kent this summer.

The 20-year-old impressed in the opening friendly victory at Tranmere Rovers, but then was left out at Wigan due to competition in Klopp’s attacking ranks.

It has since emerged that Hull City are hoping to secure a loan deal, with the two clubs already in negotiations regarding an £8 million move for Scotland left-back Andrew Robertson.

And Hull manager Leonid Slutsky has seemingly confirmed his interest in Kent, who shone on loan with Barnsley last season.

“We have four more loan options,” he said, “and a player from Liverpool, Chelsea, Everton, clubs like that, of course they’re interesting for us.”

Ojo Not a Fallback Option for Newcastle

Like Kent, Sheyi Ojo is the subject of loan interest this summer, with both Middlesbrough and Newcastle United keen to sign the young winger.

Recently relegated Middlesbrough are said to be Ojo’s most likely destination, given there is a higher chance of the 20-year-old playing regular first-team football in the Championship.

However the Shields Gazette have reiterated the Magpies’ interest in signing Ojo, refuting claims that he was seen as an alternative to Norwich City winger Jacob Murphy.

They report that Rafa Benitez wants to sign both Ojo and Murphy, though it still seems like Liverpool’s No. 54 would arrive as a backup option.

Ojo was excellent in the first half against Tranmere last week, and is questionable whether Klopp should allow him to leave on a temporary deal in the first place.