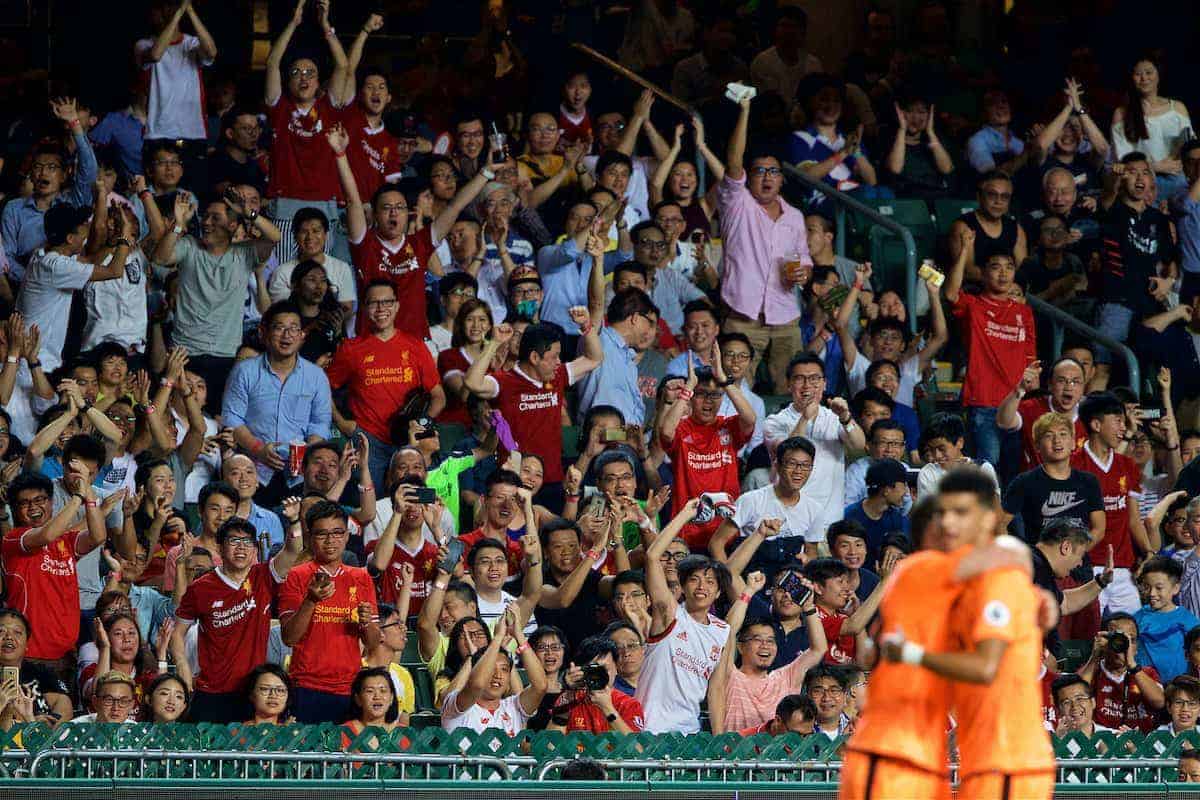 Liverpool produced an encouraging display to record a 2-0 victory over Crystal Palace in their opening game of the Premier League Asia Trophy.

The Reds travelled to Hong Kong earlier this week with a 25-man squad after they opened their summer preparations with a victory over Tranmere Rovers and followed it up with a 1-1 draw at Wigan Athletic.

Mohamed Salah, Jordan Henderson and Joe Gomez all impressed for the Reds in the first half but Liverpool weren’t able to produce a goal and the teams were still level at half-time.

Liverpool continued to dominate possession after the break, though Christian Benteke, Andros Townsend and Wilfried Zaha proved to be a threat for Palace throughout.

Dominic Solanke, Ryan Kent and Philippe Coutinho were among 10 players introduced in the second half and the trio created chances in attack.

Solanke eventually broke the deadlock after 61 minutes when he scored his first goal for the club with a powerful, low drive from the edge of the area.

Divock Origi then doubled Liverpool’s lead with just over 10 minutes to go, sealing a place in Saturday’s ‘final’.

“Most excited to see Sturridge!”

Jurgen Klopp says little can be read into his pre-season selections, but this is the 3rd game running that Ben Woodburn is in midfield. #LFC pic.twitter.com/eaZfBseCNN

Looking forward to this game. Good game time for both TAA and Woodburn again as well. Both have filled out over the summer.

“All eyes on Sturridge? For me I know I’m in dreamland when I say imagine a fully fit Sturridge for just one season?”

Everyone was talking about the new kit too…

That kit looks sublime by the way

Horrible orange strip…. Have we been bought by DUP?

“Look at Henderson, seriously his passing is sublime.”

– Outstanding Terrific Character on the forums.

If you still don't appreciate Henderson's role in this team, just watch the first 10 mins of this game. Superb at switching the play.

We have missed Henderson's passing so much last season. Vital player for us this year.

And Salah’s skills and pace were certainly attracting attention…

That touch from Salah was absolutely unreal ?

“Salah is going to cause all sorts of mayhem this year.”

– David Finch on the forums.

Salah is so quick, Delany didn't even try to catch him then ?

Couldn't even take him out when he was trying to either! ???

At the back, Gomez made a strong impact…

Joe Gomez has dealt better with Crystal Palace's than Lovren ever could. Fantastic first half from him and Matip. #lfc

“Gomez is really wanting to give Klopp something to think about.”

Solanke’s goal was a cracker…

What a hit Solanke! Absolute beauty!

What a stunning goal from outside the box. Brilliant from Dom Solanke

A goal and assist for Origi today.

Good play from Origi being in the right place at the right time! #LFC

Let us your know your reactions in the comments section.