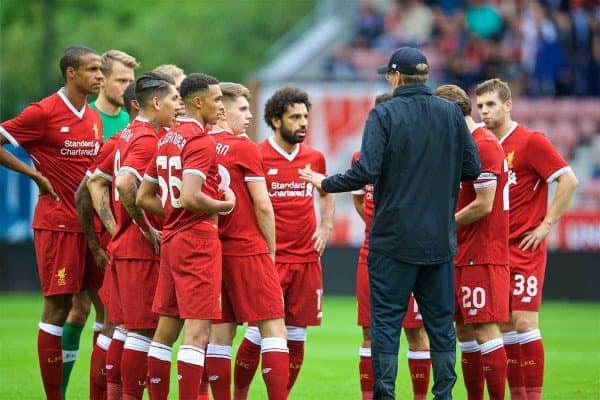 Liverpool endured a more difficult evening away to Wigan Athletic on Friday, but Jurgen Klopp‘s side still showed plenty of positives in their 1-1 draw.

For the second time in as many games, Ben Woodburn lined up as part of Klopp’s three-man midfield, with the Welshman showcasing his versatility.

Woodburn is typically considered a forward, and has spent much of his time under Klopp so far operating out wide, but these cameos in the middle of the park could hint at a future role.

The 17-year-old was happy to drift around, often taking up duties as the deep-lying midfielder while Adam Lallana and Georginio Wijnaldum pushed forward, though he was sometimes slack with his passing.

It remains a work in progress for Woodburn, but given his flexibility he should have plenty of opportunities this season.

Having coped well over a combined 90 minutes in midfield, the youngster may be earmarked for a lengthier stint at some point over the course of the summer.

Despite both Lallana and Philippe Coutinho also returning to the side after their extended break this summer, the focus in the buildup to Friday’s trip to the DW Stadium was on Mohamed Salah.

The Egypt winger, Liverpool’s record signing, arrives with great expectation on his shoulders, and over 45 minutes he showed glimpses of what he can provide.

It took just two minutes for Coutinho to provide Salah with a threaded pass to run onto, and the 25-year-old almost got off the mark after bursting into the penalty area, just blasting wide.

While he was at times out of sync with Klopp’s pressing game, Salah was a vital presence up front throughout the first half, with his pace and neat interplay serving as a key outlet.

He was rewarded for his efforts with the equalising goal on the stroke of half-time, and it would be no surprise to see plenty more over the course of the season.

Klopp made an interesting decision in opting to leave James Milner out of his stronger, first-half lineup, reserving the converted left-back for the closing 45 minutes.

In Milner’s place was a natural right-back, Jon Flanagan, who is working his way back to match fitness after a disappointing season languishing on loan at Burnley.

He has been starved off football of late, and it is still pre-season, but Flanagan looked way off the pace at the DW, with Wigan exploiting his lack of pace and dodgy positioning.

Interestingly, it emerged just ahead of kickoff that the Reds were close to finalising the £8 million signing of Hull City left-back Andrew Robertson, and it couldn’t come sooner.

The addition of a specialist left-back, with great potential and, crucially, the ability to use his left foot, will be hugely beneficial.

With his hands tied by another impending transfer, Lucas Leiva‘s £5 million move to Lazio, Klopp was forced to change his defensive lineup for the second half.

Lucas was omitted while he considers whether to leave Anfield after 10 seasons, with Kevin Stewart taking his place, joining Milner, Joe Gomez and Dejan Lovren at the back.

However, while Stewart had been utilised at right-back in earlier stages of his career, instead he was fielded at centre-back, with Gomez in turn shunted to right-back.

The 20-year-old is certainly a serviceable full-back, as he showed in the first months after joining Liverpool in 2015, but his future should be at centre-back, and he needs time to develop there.

It could be that a season-long loan would allow Gomez to progress, with Brighton & Hove Albion among those interested.

Who Makes the Cut For Hong Kong?

Speaking after Friday’s draw, Klopp revealed a frustrating restriction to his squad for the upcoming Premier League Asia Trophy in Hong Kong: he is only able to include 25 players.

This presents a selection quandary for the German, who has used 27 different players over the Reds’ two warmup friendlies so far.

At the DW, Danny Ward, Nathaniel Clyne, Alberto Moreno and Harry Wilson were all out with injury, while Connor Randall, Ryan Kent, Lazar Markovic and Sheyi Ojo were also absent.

It is likely that the latter quartet are set to leave—and Lucas, Moreno and Mamadou Sakho should follow—but it remains to be seen who does and doesn’t make the cut for Sunday’s flight.

Most names are likely nailed on, but the likes of Pedro Chirivella and Dominic Solanke may have played their way onto the plane.