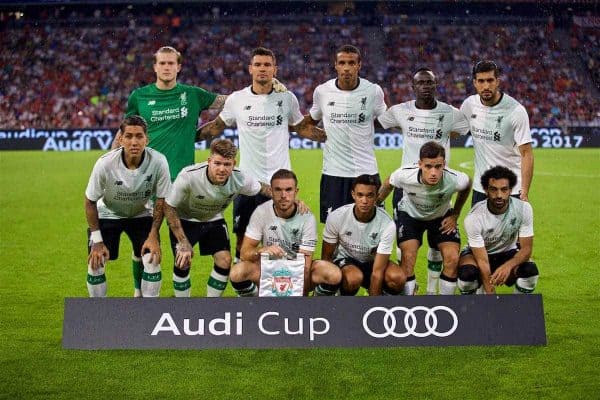 Liverpool reached the Audi Cup final after seeing off a poor Bayern side with an encouraging blend of control and counter-attacks.

It was apt that lightning struck just as the game kicked off. One of the fastest Liverpool wing pairings in recent memory lined up either side of Roberto Firmino to provide an exciting and pacy wide attack.

Both Sadio Mane and Mohamed Salah had spent much of last season playing on the right wing for Liverpool and Roma respectively, so one of them would be required to take up a role on a different, if not entirely unfamiliar side, if they were to appear in the same starting eleven.

“Sadio could play on the right and Mo could play as the No 10. No problem,” said Klopp when asked about this selection in pre-season. He even went on to refer to this game’s opponents, Bayern Munich, when listing further possibilities.

“Mo can even play as the No 9. He was the striker or the second striker at times for Roma. We have lots of different options.

“Bayern Munich’s most successful time was with a left footer on the right wing and a right footer on the left wing. (Franck) Ribery and (Arjen) Robben. That wasn’t the worst idea!”

“Sadio has played on the left before. Most of the time it’s actually easier for players to play on the ‘other side’. These two players have the ability and the speed to play on either wing.”

This was the case here, and Mane was the natural choice on the left. Before he joined Liverpool he played much of his football from this wing, and in terms of career totals he’s played more games on the left (105) than on the right (59).

Mane opened the scoring with his left foot, which is encouraging for a right footer playing on that side. He was also instrumental in the second, sending Alberto Moreno on the overlap with a neat bit of showmanship.

After the first goal Salah operated as the centre forward for several minutes, with Firmino dropping deep from the right to hold the ball up. This mid-game swapping of positions could be a regular occurrence in the coming season.

Moreno’s speed was also important down the left and, forgetting for a moment that this is a pre-season friendly, he had one of his best games in a Liverpool shirt.

One pinpoint, perfectly weighted ball from the left found Salah on the opposite wing but his shot was saved. A more speculative, bullet cross from Moreno later in the half led to the second goal, and showed the value of having competent full backs to complement the attacking threat.

On the other side Trent Alxander-Arnold had to focus more on the other part of a full-back’s job.

When he did move forward to attack it wasn’t always on the overlap. He sometimes took up a position inside Salah as an attacking midfielder, and on one occasion he drove forward through the centre — only a poor last touch denied him a shooting opportunity.

But much of Trent’s game was about stopping Ribery. Even when he did attack you got the sense he always had one eye on the Frenchman lurking behind him.

He performed his defensive duties well, staying on the inside of the winger and frustrating him with niggling fouls. Ribery was forced to abandon his right wing post and seek easier routes to goal elsewhere on the pitch.

In the centre of the park, while the likes of Philippe Coutinho, Georginio Wijnaldum and Adam Lallana will operate with an attacking mindset from midfield, Can performs more of a box-to-box role. This allowed him to link up well with Henderson in deep positions, as well as with the attack, and on one occasion he even provided an overlapping run down the right.

As this was a pre-season friendly there were a few changes at the start of the second half. Wijnaldum and Lallana emerged to offer the side the aforementioned attacking midfield duo, while Coutinho moved out to the left as Mane was withdrawn.

The counter-attacking threat remained, and it was aided by some sloppy play in midfield by Bayern’s Renato Sanches who had replaced the injured Thiago in the first half.

Further changes in the second half subtly altered the feel of the side, with Ryan Kent in particular impressing during spells on both wings.

He skinned Rafinha down the right before setting up Grujic, but the Serbian’s goal was disallowed.

Liverpool were playing like a luxury version of the teams who come to Anfield looking to pinch something on the counter-attack. It was calculated rather than desperate, and the side were fluid and imposing on the break.

It recalled many of the strengths of Klopp’s best Dortmund sides, who were able to hit sides on the counter but also control the game when required.

The defence were solid enough thanks to good performances from both full backs and steady display’s from Joel Matip and Dejan Lovren in the middle. Loris Karius had little to do, but his distribution from hands and feet makes the team look a lot more fluent and effortless in their build-up play.

“In the first half we were dangerous on the counter-attack, and our defensive pressing was very good,” said Klopp summing up this performance after the game. He also spoke of room for improvement, and with just two games left of pre-season the German will be hoping that these games will be enough to fine tune his team in time for the start of the season.