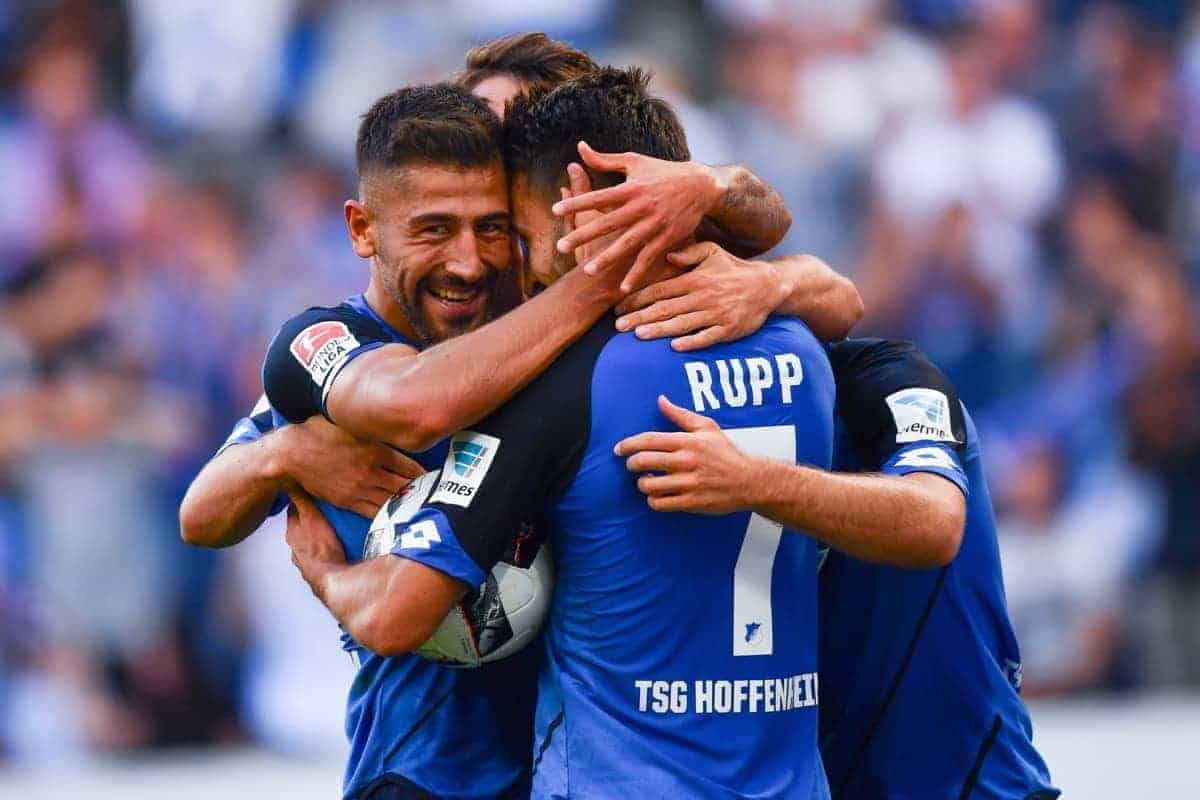 Drawn against Bundesliga hopefuls Hoffenheim in the play-offs of the Champions League, Liverpool will take on a formidable side in August.

The Reds were faced with one of five European outfits in the draw in Nyon on August 4, including OGC Nice, Young Boys, Steaua Bucuresti and Istanbul BB.

But it was Julian Nagelsmann’s Hoffenheim who were plucked out of the hat, setting Jurgen Klopp‘s Reds up for a two-legged clash with another German side in Europe.

Having finished fourth in the Bundesliga last season, Hoffenheim are certainly a strong challenge for Liverpool.

At the Rhein-Neckar-Arena on August 15, and back at Anfield on August 23, they will be tasked with putting 1899 to the sword and sealing their place in Europe’s elite.

But what do we know about Hoffenheim? And why are they a threat to the Reds’ continental hopes? Three weeks after Liverpool appointed Klopp in 2015, Hoffenheim made a bold call in earmarking their U19s coach, then just 28 years old, as their new manager from 2016/17.

Nagelsmann’s promotion was ultimately brought forward to the beginning of 2016, following the resignation of Huub Stevens, with the German becoming the Bundesliga’s youngest-ever manager.

A former player with Augsburg and 1860 Munich, Nagelsmann’s career was abruptly ended due to injury, prompting him to make the transition into coaching, working under Thomas Tuchel at Augsburg.

Rising through the ranks at Hoffenheim, after joining as assistant to their U17s in 2010, Nagelsmann quickly made a name for himself, but his impact at first-team level was still remarkable.

Steering Hoffenheim away from relegation in 2015/16, Nagelsmann spent last summer building for major improvement in 2016/17.

Nine first-team players were brought in ahead of the campaign, but much of Nagelsmann’s work was done on the training field.

He has described himself as “like a baker,” saying “I mix things, put them in the oven and see if I like what comes out,” and this has resulted in a shifting tactical outlook in Hoffenheim.

Last season he largely employed a fluid 3-1-4-2 system, but his side is certainly difficult to pin down.

Younger than both James Milner and Ragnar Klavan, and just nine months older than Adam Lallana, Nagelsmann is a prodigious young manager, and will hope to serve as a match to Klopp. After last season’s overhaul of personnel, Hoffenheim have brought in another six new players so far this summer, including former Arsenal winger Serge Gnabry.

Gnabry left Werder Bremen for Bayern Munich in June, but will spend the season on loan at the Rhein-Neckar-Arena, as he continues his excellent progress on returning to Germany from London.

Another high-profile arrival, and another ex-Gunner, is Havard Nordveit, who joined from West Ham United towards the beginning of the transfer window, looking to revive his prospects at Hoffenheim.

Nagelsmann has, however, been forced to contend with some major departures, chiefly Niklas Sule and Sebastian Rudy, who both joined Bayern, while Fabian Schar left for Deportivo de La Coruna.

The 30-year-old still has a strong squad to build around heading into 2017/18, however, led by their excellent forward duo.

Between them last season, Andrej Kramaric and Sandro Wagner scored 30 goals in all competitions, with 26 of those coming in the Bundesliga, while Adam Szalai and Mark Uth provided a further 16.

Operating behind Nagelsmann’s attacking pair, Germany international midfielder Kerem Demirbay is arguably the star of the show, and his creativity and dynamism will be a major threat to the Reds.

And in Benjamin Hubner, they still have defensive strength despite Sule’s departure, with Bundesliga expert Keith Costigan describing him as “just as important in Hoffenheim’s amazing turnaround.” The Rhein-Neckar-Arena is a 30,150-capacity stadium situated in Sinsheim, just under five miles outside of Hoffenheim, which is itself located between Frankfurt and Stuttgart.

For travelling supporters, the Reds’ clash in Sinsheim on August 15 will provide a taste of how rail seating operates, though UEFA regulations require the seats to be bolted down for the duration.

In March, however, Nagelsmann criticised the low turnouts at the Rhein-Neckar-Arena, citing a “relatively normal” pricing structure and saying as a result he had “very little understanding.”

It is likely that the arrival of Liverpool will see a sold-out stadium, however, with plenty at stake for Hoffenheim this month.

Liverpool are yet to meet Hoffenheim in their 125-year history, ensuring their trip to the Rhein-Neckar-Arena will be an intriguing one.

The presence of Klopp will provide the Reds with a considerable insight into their opposition, however, with the German having faced Hoffenheim on 17 occasions in his managerial career so far.

Of those, Klopp has won six, drawn six and lost five, and will be keen to hammer home the importance of avoiding complacency against Nagelsmann’s side.

The 50-year-old believes Hoffenheim will be as wary of the Reds as they are of the Bundesliga outfit, however, saying “it’s not the best thing they could get.”

“It’s a very interesting club. They have a lot of really good young players. They lost two of them—Rudy and Sule to Bayern—and had a little change,” he explained.

“[They have] a very young manager, just 30 years old, a very talented man. That’s a real challenge but I’m looking forward to it.”

For one player in Klopp’s ranks, however, the play-off will provide a fitting reunion, with Roberto Firmino having left Hoffenheim for Liverpool in 2015.

The Reds will need to draw upon the experience of their manager and their centre-forward this month, as Hoffenheim are far from a soft touch—and should be treated as a major threat to their European hopes.