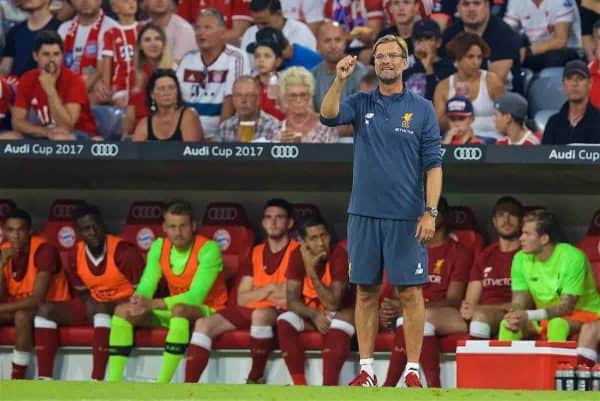 Liverpool lost 5-4 on penalties in the final of the Audi Cup against Atletico Madrid .

It was a much-changed side with this game taking place 24 hours after the Reds’ strongest XI saw off Bayern Munich 3-0.

Only Sadio Mane and Emre Can, who were withdrawn at half-time the night previous, remained in the starting lineup.

Can played the holding role in midfield, with Gini Wijnaldum and Adam Lallana alongside him.

Dominic Solanke led the attack, with Ben Woodburn on the left and Mane on the right.

It was certainly a slower tempo, with Atletico a very different proposition to Bayern for Liverpool.

The first 20 minutes saw very little action, with Liverpool playing the ball around but Atletico keeping a disciplined shape as you’d expect.

Liverpool fell behind in the 35th minute when Keidi Bare headed in from close range after Ward had made a superb save to tip the ball onto the bar, only to be unlucky with the rebound.

Gomez moved to right-back, Kent played on the right of the front three, and Firmino on the left of the attack.

Despite the influx of new faces, the legs remained heavy with this being the second game in two days and training taking place on each morning. The hot, muggy conditions at the Allianz Arena didn’t help the tempo either.

Ovie Ejaria replaced Wijnaldum midway through the second half to get his first appearance of pre-season, and Divock Origi replaced Solanke up front.

Opportunities were few and far between, in a very lethargic pre-season game. Grujic fired over from the edge of the box after a nice flick from Firmino with 15 minutes remaining.

Liverpool levelled things up from the penalty spot with eight minutes remaining. Firmino cooly dispatched the spot kick, sending the ‘keeper the wrong way after Origi had been fouled.

The equaliser finally pushed Atletico into attack, and Ward made a smart save from a corner late on.

The match ended 1-1 and went to penalties, with Atletico winning 5-4; Henderson being the only player to miss a spot-kick.