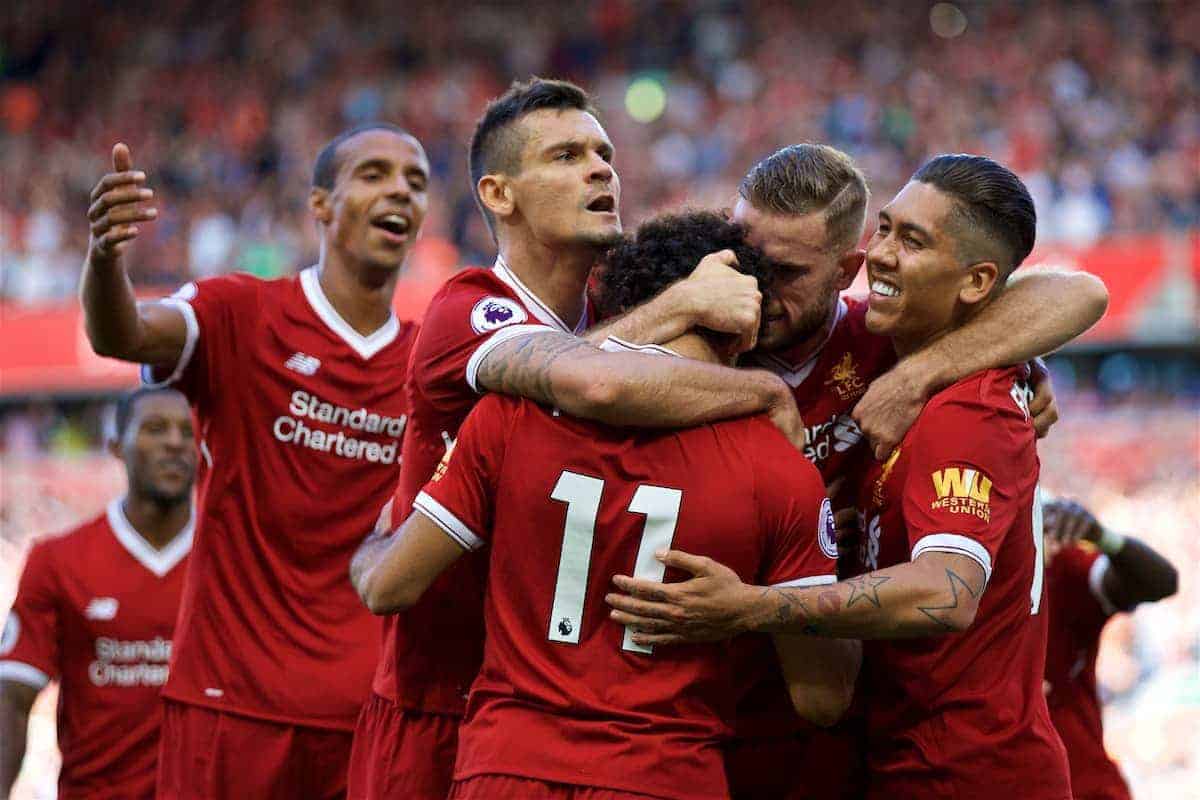 Liverpool brushed aside Arsenal with a dominant attacking display which saw a number of impressive performances throughout Jurgen Klopp‘s side.

A surprise starter ahead of the “rested” Simon Mignolet, Karius had a chance to show that he can be Klopp’s No 1.

He had one shaky moment in the first half as he dawdled on the ball for far too long, but shortly after this he came to punch a cross in a very convincing manner.

However, the former moment was a more common occurrence than the latter, and with no shots to face Karius will be judged on his play with the ball, which was too hesitant and not what his manager will have been looking for.

Gave Alexis Sanchez nothing on his return to Arsenal‘s side, and demonstrated the strength in depth Liverpool have in this position.

Assisted the opening goal with a quality left-footed cross onto Firmino’s head.

He blocked numerous shots, including an important block from an Aaron Ramsey shot just before half time.

Also made several important tackles throughout the game and was always on hand to intervene when needed.

Showed good pace and strength, and other than one free kick given away in a dangerous area, he was perfect.

Made an important tackle on Welbeck towards the end of the first half. Won a free kick from it too.

Felt the wrath of Klopp when he needlessly booted a long ball to Cech with the first half winding down and he made a similar mistake in the second half.

Other than that though, he was a big part of Liverpool’s defensive display which saw Arsenal fail to have no shots on target.

Did well in his battles against Welbeck, keeping pace with him as well as using his strength well.

Played some good passes out of defence into midfield which were important when it came to setting Liverpool on their way.

Also stepped into midfield to do some pro-active defending, winning the majority of his duels against the Arsenal attackers.

A much-improved performance from the Croatian.

Some good interventions at both ends of the pitch, using his pace to get up and down the left flank.

Made a good recovering tackle on Alex Oxlade-Chamberlain in the second half, and was generally solid with his defending, save for one slightly worrying moment in the penalty area during the first half.

Looks to have a good shot on him too, and if he continues to play regularly it wouldn’t be a surprise to see his name on the scoresheet soon.

Created a chance in midfield and burst through himself in an attempt to score it after getting the return pass from Firmino, but his shot was tame and trickled wide and short of the goal-line.

Had another shot in the second half, but it went over as he was pressured by an Arsenal defender as he ran onto the ball.

Picked up the pieces well in midfield, and helped his side win the battle in the centre of the park.

Battled hard in midfield, winning plenty of his one on ones both defensively and offensively.

At times it looked like he was toying with the opposition midfielders, which pleased the crowd who regularly sang his name.

Tricks, skill, strength and composure. This was more like it from the Dutchman.

A couple of great early passes — one across the box for Salah and another lofted over the defence for Mane.

Good defensively too. Doesn’t shirk a challenge and put in a couple of good tackles.

Motored through the Arsenal midfield like they weren’t there, and set up Salah for down the left in the build-up to Sturridge’s goal.

Missed a good early chance to score when he got on the end of Can’s cross. Should have lifted it over the keeper but the ball fell to him on his weaker right foot.

Another chance in second period but shot straight at Cech having ran half length of the pitch.

Despite these misses, the chances continued to fall his way and he eventually took one, sprinting the length of the pitch to finish past Cech following an Arsenal corner at the other end.

Also grabbed an assist, and looked more dangerous as the game went on. If he can match Mane’s current level on a regular basis, Liverpool will be unstoppable.

Involved in everything as he has been all season. Works the ball well both with the midfielders and the wingers either side of him.

Glanced Gomez’s cross past Cech for the opening goal, and will get an assist for the second after he played a perfect ball which gave Mane the opportunity and space to run at the defenders.

Sent a good volley just wide on the half-hour mark, but shortly after this he was able to find the net with a rasping effort cutting inside from the left after evading his marker.

He was a constant threat down the left, and regularly beat his opponent for pace.

On this occasion he had more support from Salah on the other side, as the speed of the two wingers tore Arsenal apart.

Came on to occupy the Arsenal defence late in the game, and managed to get himself on the scoresheet, knocking Salah’s cross in at the far post.

The big call was to leave Mignolet out, and in the end it didn’t matter as his side faced no shots. Maybe he knew this would happen.

The side started off with a 4-5-1 shape in defence, playing in a more withdrawn way than they had done in recent games.

But when they won the ball back they were dangerous on the break, throwing numerous players forward from midfield and pushing both full backs high up the flanks.

As the game went on Liverpool sensed Arsenal‘s fear, and that 4-5-1 became the more attacking 4-3-3 seen regularly under Klopp.

It was a perfect display in both attack and defence Klopp and his team have to take the credit for this along with the players.