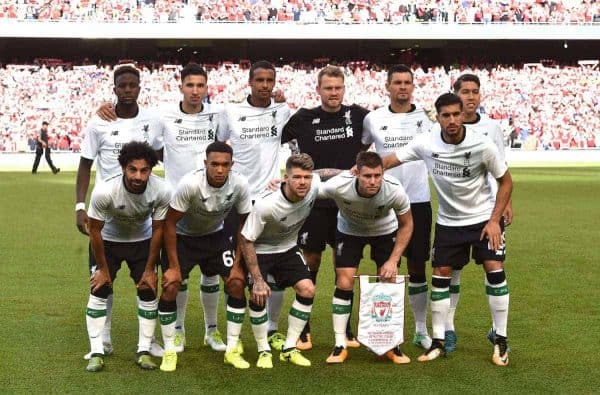 Liverpool pre-season player ratings – Who impressed most this summer?

Liverpool’s pre-season is done and dusted for another year, but how has every Reds squad member performed throughout the summer?

Saturday’s 3-1 victory over Athletic Bilbao in Dublin rounded off what has been a productive four weeks or so for Jurgen Klopp‘s side.

We didn’t do player ratings for any pre-season games, for obvious reasons, but below we look at the performances of each individual across the eight games.

The Belgian had a quiet, solid pre-season, and while he was never consistently tested at any point, he did enough to justify remaining Liverpool’s first-choice goalkeeper.

There was the odd moment of uncertainty here and there, particularly with the ball at his feet, but Karius showed good decision-making outside his box and didn’t do much wrong. Like Mignolet, not called into action too much.

Ward only appeared once during the summer, which suggests he isn’t the solution moving forward. One outstanding save against Atletico Madrid will live long in the memory, though.

The right-back’s pre-season was ruined by injury, and when he did feature, against Tranmere Rovers, he was his usual reliable but slightly limited self.

Is Alexander-Arnold now the Reds’ first-choice right-back? A very impressive summer saw the teenager once again make great strides, bringing quality and energy down the right flank. Defensively better, too.

Flanagan is a very likeable individual, but this summer showed he is not even close to Liverpool standards now. Looked off the pace time and time again, both in terms of fitness and ability.

Milner scored the opening goal of pre-season from the penalty spot, but his lack of pace was an issue when used at left-back and he lacked discipline in midfield. Has to be a squad player from now on.

Nobody saw it coming, but Moreno enjoyed a very pleasing resurgence. He was superb in the 3-0 win over Bayern Munich, and looked a more confident, effective presence whenever he was called upon.

From the moment Robertson made his unofficial debut, against Hertha Berlin, he looked the part. Quick, intelligent and a crisp user of the ball, he will be a good signing.

The Cameroonian didn’t always look as assured as he did for much of last season, especially on the ball, but he was largely reliable. Needs a top centre-back alongside him.

Solid at times, but Lovren continued to be an erratic presence at the heart of the Liverpool defence, with his reckless defending for Athletic Bilbao’s equaliser a classic example of why he cannot start regularly.

Klavan coasted through the majority of his games, with Liverpool often the dominant side, and he was reliable without ever showing he should be a key man in 2017/18.

We all want Gomez to be a huge success at Anfield, but this summer showed that he is still a work in progress. Some shaky moments here and there, but also plenty to be positive about, in terms of his physicality and confidence.

The skipper looked in good condition after injury, and his influence was noticeable a number of times. Excellent in the 2-0 win over Crystal Palace, but occasionally not slick enough in possession in other games. Missed a penalty against Atletico.

Can ignored any possible distractions about contract talks and enjoyed a strong pre-season full of dominant performances. When everything clicks, he is a midfield force to be reckoned with.

Wijnaldum was relatively understated but effective throughout pre-season, but one well-taken effort against Hertha Berlin outlined his ability to chip in with goals from midfield. Good, but nothing special.

Grujic was impressive last summer, and he has again looked very promising this time around. Tall, powerful and good on the ball, the Serb could be a surprise package this season. Scored an excellent goal against Tranmere.

Lallana wasn’t always at his best, failing to score during the summer, but his quality shone through on occasions and he dovetailed well with his fellow creative forces. Injury ended his pre-season prematurely.

Certain players could down tools with Barcelona circling like vultures, but Coutinho was often majestic in his new central midfield role. Ran the show several times, and scored and assisted in wonderful fashion against Leicester City.

It is incredible to think that Woodburn is only 17, and the last month has seen him find another gear. Two goals caught the eye, including a screamer against Bilbao, but his all-round maturity stood out the most. A tremendous prospect.

What a start Salah has made to his Liverpool career. The Egyptian finished the summer as the Reds’ top scorer with four goals, and has already added so much to the attack. Lightning fast, superb movement and the predatory instincts of a striker.

It is understandable that Mane looked rusty on his return from injury, and we probably won’t see the best of him for a month or so. Still, he scored against Bayern Munich and often looked menacing from a new left-sided role.

From nowhere, Kent has returned to Liverpool and looked one of the most promising youngsters at the club. Every time he played he carried a threat, with his fearless wing play constantly getting supporters off their seats. Has something special about him.

Firmino had a good summer, leading the line with his usual class and often looking the most talented player on the pitch. It would have been nice to see a goal from open play, though, rather than just two penalties.

He may have only scored once – a brilliant scooped effort against Bayern – but it was great to see Sturridge featuring regularly and looking much sharper. Far from earth-shattering, but promising.

Liverpool’s surprise package of the summer? Solanke has come straight in and looked the part, scoring three times and bringing touch, awareness and aerial presence to the Reds’ attack. A very promising start.

If Solanke’s stock has risen, Origi’s has gone in the other direction. Too many ineffective, disinterested performances were on show, with a lack of hold-up play and general quality apparent. Scored against Palace.